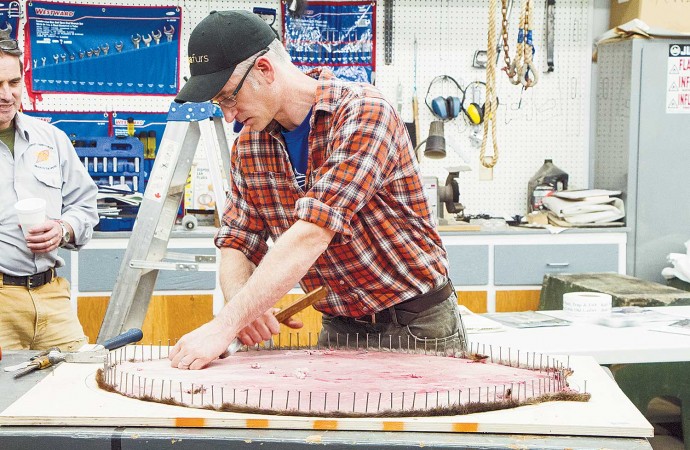 Mark Taylor from Fur Harvesters Auction Inc. demonstrates how to flesh and dry a beaver pelt at a workshop held in Fort Smith.Photo: Dali Carmichael.

The trapper instructor’s deft movements were watched carefully by a quiet group of about 20 onlookers as he swiftly nailed the oval outer trim of a freshly skinned beaver pelt to a flat board, prepping it to dry and sell.

This scene took place in Fort Smith on Dec. 9, and will be replicated as a beaver-trapping workshop – hosted by ENR and the Genuine Mackenzie Valley Fur program (GMVF) – travels to five other locations through the South Slave and Dehcho regions. Mark Taylor, the trapper relations manager with the Fur Harvesters Auction Inc. based in North Bay, Ontario was giving the demonstration.

“Everyone was loud and talking before, but as soon as Mark started skinning, everyone just stopped and paid attention,” said Francois Rossouw, a marketing manager with GMVF.

Novice and experienced trappers alike came out for the event, to learn some of the best practices for snaring, skinning, fleshing and sending out beaver furs to be sold on the international market through the GMVF.

“We’re here to promote better fur handling and to tell the trappers what the industry wants because it’s changing and evolving all the time,” Taylor said. “We want to give them an indication of how to properly prepare hides for market, plus it’s just to share some tips on how to catch some of the animals.”

Every year the two organizations travel to a select set of communities to run similar workshops on a variety of animals.

“The idea is to show trappers different ways of doing things. Not that the way they do it is incorrect but the idea is to get more value for your fur and that’s our job,” Rossouw said. “I do the marketing internationally. Whatever we take out to the marketplace has to look the best.”

“You can always learn something new,” observed hunter Richard Mercredi, one of the more seasoned attendees.

“My family has a trapline in (Wood Buffalo National Park) that we want to use it more this year,” said Cheyeanne Paulette, an ENR officer who sat in on the day-long class with his two young sons, Ezeh and K’aiyus. “I want to get these guys out there learning, too.”

For each variety of animal, the MVGF has a set advanced rate it pays out per pelt, funded through a $1.5-million line of credit from the GNWT.

Little nuances in the way a fur is prepared can mean all the difference between collecting $25 per beaver pelt – the rate set by the GMVF – and losing the funds when a skin is damaged.

“Send them leather to leather and fur to fur and, I know it’s easier to roll them up and send them, but you want to make sure you keep the pelt flat,” Taylor said, one of the many tips he offered throughout the day.

Usually, Rossouw said, a beaver pelt can run between $15 and $30 on the international market.

It’s especially important now for trappers to ensure their product is top quality, so what they can sell goes for top dollar. After several high-paying seasons, the GMVF only managed to sell about 1,500 beaver pelts last year, “which is not that much,” Rossouw said.

Tensions between Russia and the Ukraine – two of the largest fur-buying markets internationally – have had an impact on sales, he noted, as has this year’s oil bust and a downturn in the Chinese stock market.

“China is probably the largest producer of finished fur products and the largest buyer. They represent 80 per cent of the market,” Rossouw said. “You’ve got this stuff happening out there which directly affects us no matter what.

“The beauty of the program is it actually protects the trapper in hard times. Right now we’re advancing on fur and whatever the advance is, it’s guaranteed. The trapper walks away with his $25 for beaver and if it sells for $15 the government eats the difference, that shortfall. We stabilize the market for them. It’s a way and means to look after a cultural activity and keep people active too. I always like to say it’s the link to the past, the present and the future for Aboriginal people, really it is.”