Going to ground: time to sequester the legacy load 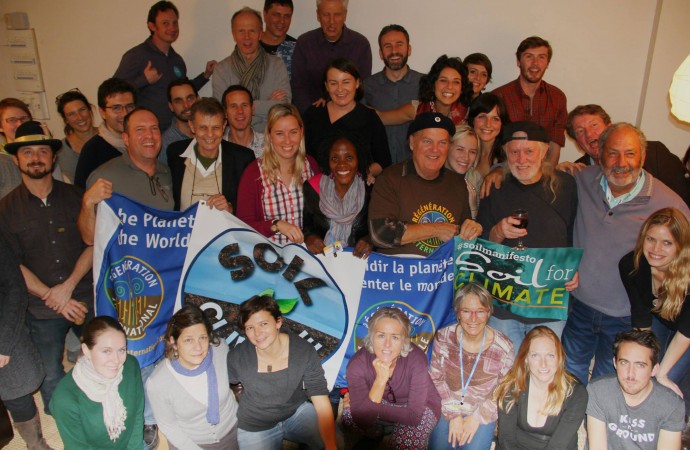 The Regeneration International team in Paris in December.courtesy Kim Rapati

How did we do with our goal of bringing the message of hope that soil has for global climate change to leaders at the Paris conference?

A historic event has occurred: for the first time, world leaders at the UN Conference of the Parties on climate change (COP21) have made the capture of carbon in the soil a formal part of the global response to climate change!

Our growing number of healthy soil advocates is starting to break through in teaching others that one of the best opportunities for drawing carbon back to the Earth is for farmers and land managers to sequester more carbon in the soil. Reducing emissions is an essential part of the equation – but that will not change the legacy load of carbon in the atmosphere already. The time is now to talk about sequestering carbon. The technology is there – plants use photosynthesis to draw carbon from the air and deposit in the soil… and the management practices to maximize soil’s potential to capture this energy are also readily available using regenerative agriculture and holistic planned grazing.

As conventional industrial agriculture and food production has intensified, it is estimated that between 50 and 80 per cent of soil carbon has been lost around the world. We know with regenerative agriculture, which mimics nature to ensure ecosystem processes function properly, we can reverse high levels of CO2 in the air. Just at the end of November, our Savory Hub in Turkey, Anadolu Meralari, posted that they received their results for their Holistic Management learning site; this year they increased the soil organic matter in the first 30 centimetres by 0.62 per cent. This is a huge accomplishment for their small project of 20 hectares with a three-person team – they have sequestered 2,000 tons of C02 in one year (or their personal carbon emission for the next 110 years) while producing the best quality meat and cheese in the area.

We felt the exhilaration of being connected to a global group of revolutionary farmers when we hosted our Soil for Climate event in Fort Simpson and in Hay River while our friends hosted similar events in Paris, South Africa, Malawi, the British Isles, Australia, Mexico and the United States.

The most exciting news to come out of COP21 is that the French government has launched the “4 Per 1,000 Initiative: Soils for Food Security and Climate” which aims to protect and increase carbon stocks in soils. A 0.4 per cent annual growth rate in soil carbon content would make it possible to stop the present increase in atmospheric CO2 and achieve the long-term goal of limiting the average global temperature increase to the 1.5 – 2C threshold which is necessary. Twenty-five countries and 75 researchers and NGOs signed on at the launch of the “4 Per 1,000” Initiative. You can read more at the Regeneration International website.

One of NFTI’s long-term goals is to build a carbon-negative campus. We will be working actively to track the carbon we emit and what we sequester so we can be a part of this exciting global momentum to heal our planet!

Kim Rapati is the operations manager at the Northern Farm Training Institute in Hay River.