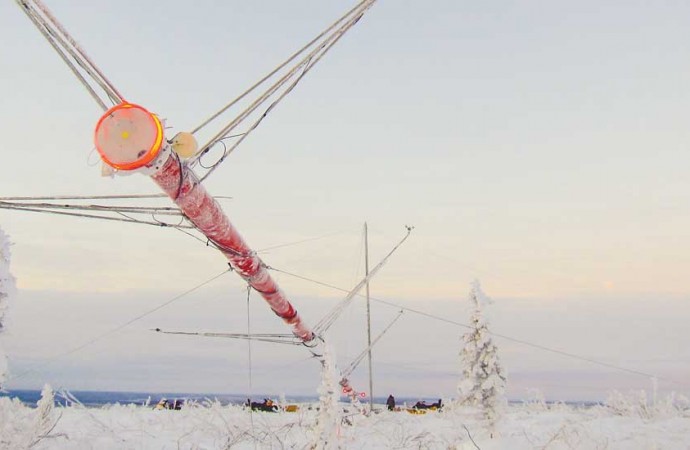 Earlier this month a new 60-metre wind tower was installed near High Point hill, 13 kilometres outside Inuvik, to measure wind power in the area.Photo: J.P. Pinard.

As Santa makes his descent from the North Pole this year, he might notice a new red light hanging high in the sky just outside of Inuvik - and it isn’t Rudolph’s nose.

Earlier this month a new 60-metre wind tower was installed near High Point hill, 13 kilometres outside of the community, to measure wind power in the area and to test the feasibility of a wind farm.

The tower is only the latest in a series of similar wind power experiments in the Beaufort Delta, conducted by Yukon engineer J.P. Pinard through the Arctic Research Institute over the last several years. The project is funded by the Government of the Northwest Territories.

“We did put a station and some monitoring sensors on another tower up at Storm Hills and we found phenomenal winds there, world-class winds. The issue there is to build a road and a powerline there and that’s going to make it very expensive,” Pinard said, noting the site was about 60 km out of town. “The folks at (the Northwest Territories Power Corp.) approached me at one time saying ‘what about this hill that’s just 13 km east of Inuvik?’ And I said sure, let me look at it a little more closely.”

Earlier this year, a 30-metre tower was installed at the same site, but had to be taken down after only eight months.

A data logger has already started sending out weekly updates from the tower, which features both heated and unheated sensors – Pinard worried cold temperatures and ice build-up may have impacted the accuracy of past measurements, if only by a few increments.

A road away from fossil fuels

Testing will likely continue for at least one year, if not two or three, before any moves are made to get wind turbines installed.

However, should the test results come out as Pinard expects them to, it could mean large savings for the town of Inuvik, which currently runs on natural gas, with diesel generators as a fallback.

“We did the economics, we converted those wind speeds into turbine energy production based on a particular model and then costed it out and what we found was, it turns out that if we put a wind farm on High Point, it would be about the same price as putting a wind farm at Storm Hills,” he said. “We would be better off at having it at High Point because we’d be able to build a road there and it would be very quick to access the site if there were problems.”

Pinard isn’t the only one optimistic about the promise of wind power. Inuvik mayor Jim MacDonald said he was also eager to see the outcome of the testing.

“They are seriously looking at wind and I think it’s a good option for power for the community,” MacDonald said of NTPC. “If they get some really good results in I’m sure they’ll start moving further into the planning and getting things off the ground. We’ll see, hopefully.”

“If we can show there is cheaper energy coming from that site than from natural gas, then great,” Pinard said. “Even if it was a little more expensive than natural gas electricity, there’s still a case for it. When you look at the big picture … there’s been way too many subsidies toward fossil fuel and there hasn’t been a real level playing field for renewable energy. There should be an incentive to make wind a little bit cheaper. I think the opportunity for Inuvik is that you could be using wind energy, not to just displace fossil fuel for electricity generation, but also for space heating.”