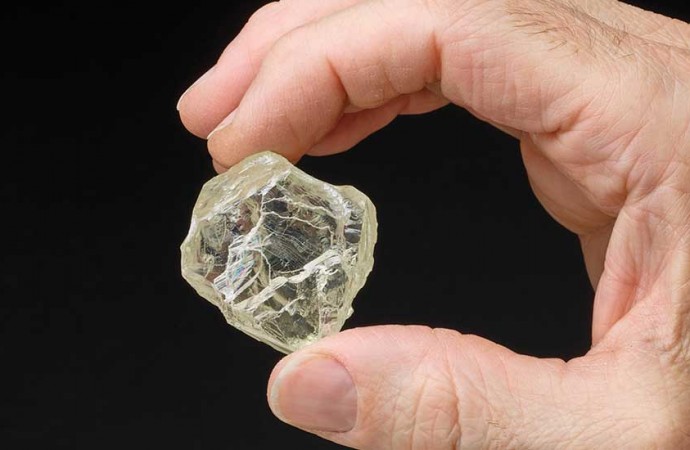 The 187.7-ct Diavik Foxfire was discovered in the Diavik Diamond Mine in mid-2015, according to Rio Tinto.Photo courtesy of Rio Tinto

Millions of dollars aside, the true value of the Diavik Foxfire is in the story behind it.

A 187.7-carat gem-quality rough diamond was found at the Diavik diamond mine 300 kilometres north of Yellowknife in June-July and revealed to the world at Kensington Palace in London on Dec. 2 by Diavik Diamond Mines Inc. president Marc Cameron. It is the largest diamond ever produced by a Canadian mine.

“It’s really tough to compete with Kensington Palace to put it on the global stage, for me to bring visibility to the Diavik mine, importantly the North and the people who live there, and ultimately the overall diamond industry, but most importantly to bring visibility back to the Northwest Territories,” Cameron said. “Because of its size, 188 carats, and the fact that it’s gem-quality, the technical side of the stone will bring significant value, but it’s the story that will bring the real value along with it. For me, that’s a strong Northern Canadian story.”

The prestige stone stands for that story: the remote island in Lac de Gras closer to the Arctic Circle than the territorial capital, the original engineering feat of bringing an off-grid mine online on a 20 square-kilometre island within about a decade of the first stake being made, the ongoing operation of the mine in one of the most unforgiving environments on Earth including the largest wind farm in the NWT, the heavy involvement of Aboriginal and community partners.

“It was really nice to bring the Diavik mine, the people that work there, to the global stage, and the Northwest Territories and Canadian diamonds overall,” Cameron said. “Overall it’s a great story behind an exceptional stone. It is a very rare find. It’s two billion years old but its journey is just beginning and it’ll be interesting to watch where it goes over the next few months moving from a rough diamond to a potential polished diamond.”

The two billion year-old gem was discovered by an operator in the above-ground Diavik recovery mill before being sent for sizing and cleaning in Yellowknife.

“At that point, this became a special stone, as do a lot of our stones of higher quality and higher size,” Cameron explained. “We have a special mechanism within the business to decide ultimately which joint venture partner is going to become the owner of the stone,” which in this case was Rio Tinto, which owns a controlling 60 per cent stake in the mine.

Grand Chief Edward Erasmus said in a press release he was “very pleased” the diamond’s name honours the caribou crossing, which has been critical to the Tlicho since “time immemorial.”

“It’s something that very early on we set out to do and was important to us,” Cameron said. “We approached the Tlicho, one of our Aboriginal partners, and asked them if the diamond could be given a local name. They took some time to review that, were excited about it. It recognizes the importance of the caribou to the Aboriginal people of the North, but it also recognizes the island on which the Diavik mine is located.”

Cameron wouldn’t valuate the rough diamond for business reasons, speculating the stone could yield one 70-carat or two 35-carat polished diamonds and several smaller companion diamonds for the heirloom jewellry they will most likely become a part of. The gem will be showcased in the British capital before returning to Antwerp for “careful assessment and planning for the next stage of its journey.”

The Kensington Palace reveal was appropriate since the largest diamonds in the world are in the possession of the British royal family as part of the Crown Jewels of the United Kingdom. The largest diamond ever found, the Cullinan, weighed close to 3,107 carats when it was discovered in 1905 and was cut into nine gems, the largest two joining the Crown jewels as the Great Star of Africa and the Second Star of Africa.

Diavik opened in 2003 and has produced between six and seven million carats of mostly large, white, high-quality diamonds per year since.

“We are delighted to showcase this exceptional, two billion year-old Canadian diamond,” Rio Tinto Diamonds managing director Jean-Marc Lieberherr said in a press release. “Its ancient beginnings, together with the fortitude, finesse and innovative technology required to unearth a diamond in the challenging sub-arctic environment, make it a true miracle of nature.”