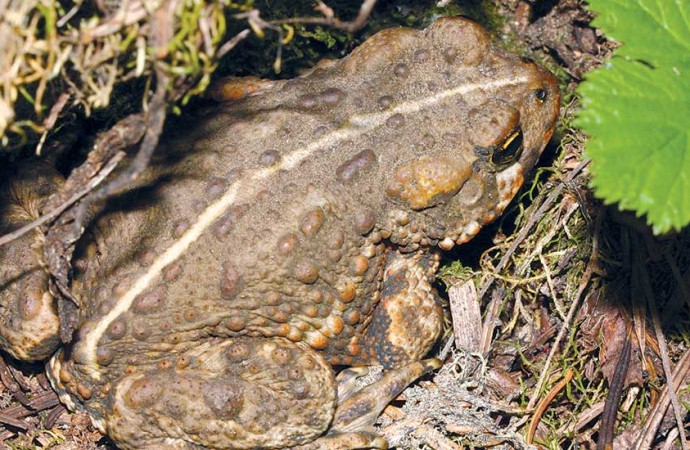 The western toad has been declared a threatened species in the Northwest Territories.Photo: Wikipedia.

Western toads across the Northwest Territories can let out a croak of relief now that they are on the verge of being added to the GNWT’s list of Species at Risk as a threatened species.

That designation means the species is likely to become endangered if nothing is done and could be gone from the NWT in our children’s lifetimes.

They are far from out of the woods as their natural habitat extends from the Rocky Mountains to the Pacific Coast and from southern Alaska to Baja; up to 3,600 metres above sea level in the west, plus western Alberta and several states and five distinct populations in Yukon’s Liard River Basin.

Listed in the federal Species at Risk Public Directory, the Western toad is the only World Conservation Union (IUCN) designated endangered or “red-listed” amphibian that occurs in Canada. The NWT Species at Risk Act is complementary to federal legislation of the same name, but defers to local land claim agreements in the case of a conflict.

The Western toad will breed in an “impressive” range of habitats according to the federal government, from lakeshores to roadside ditches, but has suffered declines in the United States and Mexico.

The decision, made by consensus, was that of the Conference of Management Authorities (CMA), which was created in 2010 and includes wildlife co-management boards established under land claim agreements (WMAC(NWT), GRRB, SRRB, WRRB), the GNWT, the Tlicho government and the government of Canada.

A signed copy was delivered to the Environment and Natural Resources ministry on Nov. 27.

The next environment minister is required to add the Western toad to the species at risk list within three months. No automatic prohibitions for species or habitat come into effect upon listing, which remains in effect for 10 years, but a recovery strategy must be completed within two years because the toad is further classified as threatened.

Hands off that hairy braya

The CMA also approved a recovery strategy for the hairy (pilose) braya, a long-lived perennial plant in the mustard family found only in the NWT. It was already listed as threatened at the territorial level and is being considered for the federal SARA.

The plants are between 4.5 and 12 centimetres tall arising from a tuft of basal leaves, with white flowers arranged in dense clusters.

The hairy braya’s was the first recovery strategy created under the Species at Risk Act since it came into effect in 2010. The Western toad’s would be the second.

“Every species plays an important role in the environment,” Pellissey said. “Losing a species can have impacts that we may not even be able to predict. The NWT is lucky to still have so much unspoiled wilderness and habitat for species that are in trouble in the rest of Canada, like boreal woodland caribou and wood bison. Because of that, we also have a big responsibility to take care of these species. We all have a responsibility to help conserve biodiversity.”

A wide variety of information is available at www.nwtspeciesatrisk.ca.