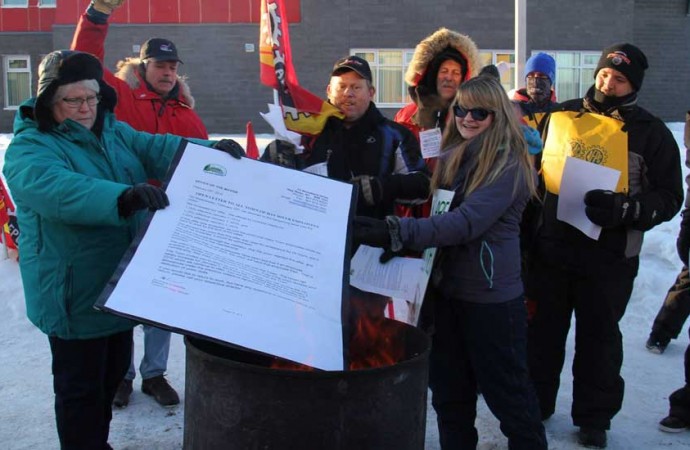 A pall descended on normally good natured Hay River for six months of online mudslinging, face-to-face confrontations, vandalism and even calls to the RCMP as the community split and took sides over a municipal worker strike, all over a change in workers’ wages worth fractions of a percentage point.

The Union of Northern Workers (UNW) and Public Service Alliance of Canada – North (PSAC) said it all came down to about $40,000, the cost of giving the town’s employees what they felt they deserved in a new collective agreement: 2.5 per cent in year one, 4.5 per cent split over years two and three. The union claimed that would add 18 cents per hour to the wage of the lowest-paid employee at the town and 30 cents per hour to the highest.

A business-heavy town council in a private sector dominated community would have none of it. Union demands were unpopular, especially when private sector wages and benefits could not keep up. The lines were drawn and became more entrenched as the weeks wore on.

The town’s personnel contract had expired in Dec. 2013 and negotiations started the following July, but by late January, 2015 it was becoming clear Hay River was on track for a municipal strike, with the union calling the town’s final offer “an insult.” The town’s offer was a three-year contract with one per cent annual increases, which 90 per cent of the town’s 30 employees voted to reject. On Feb. 9, they were on the picket line.

By Valentine’s Day tempers flared and there was no love lost between the union local and the town council. A mid-February school curling championship set to take place in Hay River was cancelled when organizers were informed the union planned to picket outside the club during the event. Disruptions to town business were minimal, according to the mayor, with that cancellation being the first effect outside the town’s municipal arena and swimming pool but within days, the tone changed again.

Take this letter and shove it

Things heated up when members of the local literally set fire to a letter from the mayor asking them to break ranks and return to work individually, accepting a one per cent per year increase. That, after the town had given the union’s negotiating team 24 hours to accept a contract offering 1.25 per cent per year in a gambit to end the strike, now a month old.

“Every member wants to return to work, but … not by dividing the community and creating scabs,” a PSAC spokesperson said.

“It’s upsetting that they’re trying to divide co-workers, friends and their families by asking them to cross the picket line,” a striking member added.

A third round of talks broke off after just a day and-a-half in April and by the end of the month, the union had asked for third-party arbitration. Tensions rose more when rumours circulated that three positions would be cut after the strike, and again when the town rejected binding arbitration.

The effects of the strike started to grow. The NWT Association of Communities voted to move their AGM from Hay River to nearby K’atl’odeeche First Nation in order to maintain neutrality without punishing local businesses by holding the forum in another region. The union picketed the event anyway, and several NWT municipalities were unwilling to cross the line, with Fort Smith, Fort Simpson and Inuvik refusing to attend. Yellowknife Councillor Phil Moon Son also refused to attend.

May gave the union the chance to really throw out their favourite four-letter word, accusing the town of using scab labour on a contract basis to inspect and maintain municipal parks and playgrounds over the summer. Mayor Cassidy at once said parks maintenance was not an essential service and therefore did not fall under the purview of the collective agreement, and that it was a critical safety issue that could get the town sued if ignored. The pool and arena had already been closed for more than three months, now the town’s Summer Heat camps for kids would join the casualty list.

The union saw the move as an attempt to starve them out by extending the strike.

“These announcements push this dispute to new heights,” UNW vice-president Gayla Thunstrom said. “We cannot allow scabs to take our members’ work. Let’s agree to disagree and let an arbitrator sort it out.” The mayor and council rejected third party arbitration.

The bargaining teams returned to the table with a conciliation officer on May 25. The town put up a 1.7 per cent increase per year retroactive to Jan. 1, 2014. The union wanted more job security provisions, arguing the town had publicly said it intended to cut some of the jobs of the members on strike.

“We’re not going to vote on new contract conditions until we know all of our striking members are going back to work,” Bourassa said.

Vote they did, however, and more than two-thirds of members rejected the 1.7 per cent offer in a secret ballot on June 17. They complained other contracts recently signed, including the Fort Smith Housing Authority, were all worth two per cent per year or more. The town then reduced its standing offer back to 1.55 per cent.

The impact of the strike continued to grow as the weather warmed up. The RCMP was called in after a verbal altarcation between a garbage pick-up crew and picketers in June. Residents posted online that they had been harassed while cutting grass or watering flowers on municipal property around town as volunteers.

On the high road

In July town council decided to try and negotiate an end to the strike one more time before resorting to hiring replacements workers. The decision was far from unanimous. Cassidy said in August half of councillors wanted to go ahead with hiring new employees.

“When the union turned down 1.7 per cent increases, we realized that they were not interested in coming back to work for anything less than two per cent, which was more or less what their original offer was,” Cassidy said. “We realized we needed to get people back to work so we decided that we’d have to take the high road and have to move to end it.”

So the town offered two per cent in years one and two and 1.75 per cent in 2016, and the union accepted.

“It was a question of just being able to compromise,” Bourassa said. “As long as the town was willing to come up a bit more the employees were willing to come down and meet them in the middle someplace. It’s not exactly what they were looking for, but it’s close enough.”

Now the work to catch up on major projects stalled for six months could begin. Job one: repair the town’s social fabric.

“There were things that were said that are going to cut a bit deep,” Cassidy said. “We have to move past that and I would implore the community to look to the municipal leaders and take their example from how we’re moving forward. I don’t know how you can claim victory. Nobody wins.”

Perhaps ironically, within weeks Cassidy was the only Hay River politician who could not claim victory. On Oct. 19 every incumbent councillor was voted back for a new term, including Brad Mapes, who easily took the mayor’s chair with an 810-540 vote win.