All ice, no boards: Iqaluit hosts hockey for Nuuk 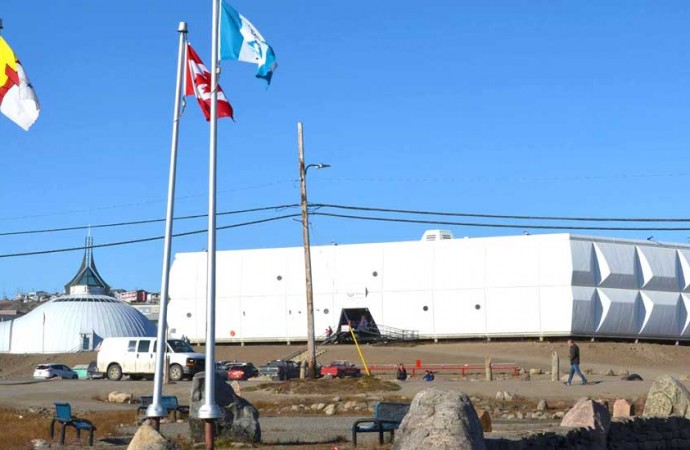 Half of the 28 hockey games to be played in Iqaluit will take place at the Arnaitok arena.File photo.

The leaders of Nuuk, Greenland’s 2016 Arctic Winter Games organizing committee are fiercely proud to be presenting the event as the sole host for the first time ever.

Much has changed since Nuuk and Iqaluit co-hosted the 2002 AWGs – at about 1,600 participants, there will be twice as many athletes there, not to mention coaches and supporters – but at least one thing has remained the same.

It may be inconceivable to Canadians but there are zero hockey arenas in Greenland, population 56,000, which resulted in several sports being dropped for the 2016 games, including speed and figure skating. While the vast majority of participants pack the Greenlandic capital for the second week in March, hockey teams from Alaska, Nunavut, Yukon, NWT and Northern Alberta will drop their gear in Iqaluit, zip in and out of Nuuk for the opening ceremonies Mar. 6, then return to Nunavut to lock horns. The plan is to fly the teams back to Nuuk for the closing ceremonies, as well.

Nuuk Mayor Asii Chemnitz Narup, 2016 games general manager Maliina Abelsen and other leaders from Greenland visited the Nunavut capital this week to touch base on the preparations, according to Iqaluit Mayor Madeleine Redfern.

“For the most part we are pretty excited,” she told the Journal.

Participants will be hosteling at Inuksuk High School, a plan even the mayor admits is “ambitious.” Classrooms, one per team, will be outfitted with bunk beds and air mattresses. Like Nuuk, population 17,000, Iqaluit expects a boost of about 10 per cent to the number of people in town for the games as 200 players, coaches and spectators are expected to attend.

“We’re well set up for that,” she said. “Anytime a large number of people come into the community they usually spend money at local stores, buy arts and crafts and eat in restaurants, so it’s a big infusion of money into our local economy.”

Redfern quickly pointed out that there are other benefits, including the cultural exchange that takes place.

“Everyone loves getting together. Hockey is a very popular sport in our community and in Canada of course, so schools will be closed for the week and we expect high attendance at the games,” she said. “Friendships always happen among the youth, people connect and they remain connected, sometimes lifelong ones. Cultural exchanges are very important, getting youth excited about sports and learning about where the other youth are coming from.”

Iqaluit coordinator for the 2016 games, Kingston-based consultant Dawn Currie is heavily involved in managing soccer and speed skating in Iqaluit on an ongoing basis.

She said the Nuuk games management approached Iqaluit about hosting hockey about 18 months ago.

“Iqaluit hosts a lot of tournaments, but not a ‘games,’” she said. “So they have athletes’ village, they have the cultural element. It’s a lot more than a hockey tournament. There are a lot of great people working to host the event and are all volunteering and putting so much time and effort in to ensure that the teams that come over and their families have a great Arctic Winter Games experience.”

She said the Town of Iqaluit “gets it” and the Iqaluit Minor Hockey Association has taken a “significant” role in working with the AWGs to host the event, volunteering to set up the arenas and athletes’ village.

“We’re fortunate to have that organization involved.”

With her background in speed skating, Currie was disappointed to see that and other sports, including dog mushing, gymnastics and curling, left out of the 2016 games. They will be warmly welcomed back at the 2018 AWGs in Hay River and Fort Smith.

“The Arctic Winter Games really are the pinnacle sporting event for most of the Northern athletes,” she said. “There are kids that use these games to develop their skills and get experience. We do have kids who come down from Nunavut and compete in higher-tiered hockey or who have gone on to college or university. This provides kids with a development opportunity for those who want to move on, but for most it is mainly a great games experience.”