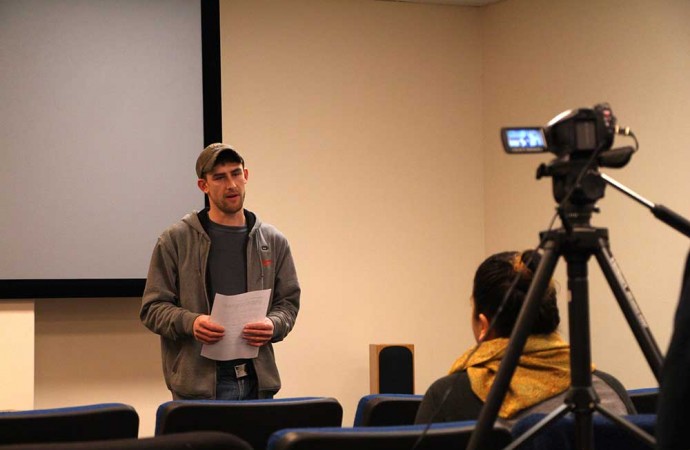 Calum McCarney auditions for Three Feathers, which will be filmed in Fort Smith this year.Photo: Craig Gilbert

Calum McCarney turns his back to the audience, takes a moment and prepares his “intense face.”

He has been asked to read an “emotional scene” by director Carla Ulrich and producer Ann Lepine, who spent last weekend holed up in the theatre at the Fort Smith Community Recreation Centre, searching for local actors to fill some of the 18 speaking roles in the 40-minute film adaptation of Richard Van Camp’s graphic novel Three Feathers.

“If anything happens to him, it’s on you!” he growls, quivering with emotion and pointing at Ulrich.

“Wow, I have chills,” the observers react when he’s finished the handful of lines.

The process is old hat for McCarney, the building maintenance supervisor for Northwestern Air Lease by day, who was cast for a small role in Hickey Gone Wrong, the Van Camp story adapted for film in Fort Smith last year.

He said he had about the same feeling after his tryout on Saturday as he did after his successful audition for that film.

“It was good, I definitely feel as good as I did last time,” he said. “We’ll see how it goes.”

Originally from Fort Resolution, Cynthia Cardinal told Ulrich and Lepine she reads and writes Chipewyan and spoke it to her children before they were old enough to go to school, since she knows they plan to shoot the film in four languages: Bush Cree, English, South Slavey and Chipewyan.

Both she and her son Alex auditioned, she for an adult role, he for an emotional Bryce.

“Did I do good on this?” she asks them when they are done reading, answering “yes” when asked if she would be interested in taking part in the mentorship program that will be taking place on-set. They plan to train locals in the ways of filmmaking while they are working this March, June and September. Multiple shoots are needed to capture the progression of seasons during the time the main characters are on the land in a film of just 40 minutes.

“I didn’t know what to expect coming in, and I was kind of nervous being put on the spot,” Cardinal said afterward. “(Alex) did really well, too, so we’re pretty excited.”

Three Feathers is inspired by the true story of three young men caught breaking into houses, Van Camp’s family home among them. They were sentenced to two years each in prison in the south, but the story imagines that they were instead sent to spend nine months on the land.

Producer Brent Kaulback works at the South Slave District Education Authority (SSDEC) which is taking a lead role in promoting the film, as it did in pushing for Three Feathers the graphic novel to be published.

“Because of the visual nature and the strong cultural element, we wanted to be able to get that out to kids and adults in a different way,” he said. “It’s exciting and people want to be a part of this project. It’s going to breathe new energy and life into Fort Smith and it will be something the whole community can be proud of when the project is done.”

Kaulback did some research into multi-lingual films in Canada before the casting process began. He found several that were shot in English and French, but is confident Three Feathers will be the first shot in four different languages, let alone three indigenous tongues.

He said the producers will review the auditions, which were videotaped, in the coming days and hoped to be able to contact those who were cast next week.

“The auditions went really, really well,” he said. “We had kids, adults and elders come out and I was pleased with the number, variety and quality of auditions we had.”