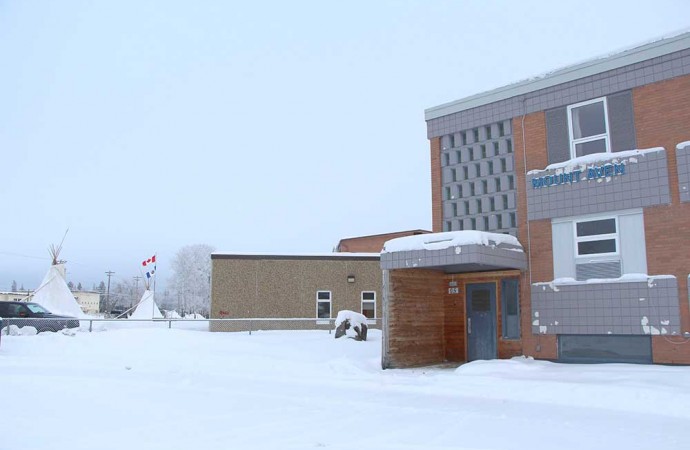 Aurora College has agreed to house a daycare in the Mount Aven building in Fort Smith.Photo: Craig Gilbert

Adam McNab is in the midst of a quagmire of his own making.

He is half of one of three couples in Fort Smith who all had babies within four months of each other, which is great for sharing advice but not so much for finding childcare.

“My wife needs to be back at work on Apr. 1, but the trouble with us is we’re in the middle of a baby boom,” he said. “The day homes only take two kids under two, so it’s the infant portion we’re lacking right now.”

McNab was one of a dozen young parents, some with kids in tow, gathering at Aurora College earlier this month to talk about the possibility of forming a not-for-profit society and creating a childcare centre with room for eight infants, which the GNWT defines as up to two years-old, 15 pre-schoolers and two after-school spaces.

They heard there are 82 licensed childcare spaces in Fort Smith, 20 of them in the afterschool program at the recreation centre, 30 at the Aboriginal HeadStart program at JBT elementary school and 32 among four homecare providers. They serve approximately 565 families, 20.4 per cent of which are single-parent, according to GNWT data. The average 2013 income in town was over $54,000 and labour participation was 70 per cent.

The proposed daycare would probably need about five employees, with one splitting time between floor supervision and administrative tasks such as scheduling and bookkeeping.

The college is willing to provide free space in the Mount Aven building next to PWK secondary school, which housed the former daycare, and carry out minor repairs the location needs.

“We need a group of people to get this going,” Fort Smith-based GNWT early childhood consultant Anne Keizer said. “We have town and college support and that’s half the battle, to not have to pay major rent or mortgage and utility payments.”

She said the ministry of Education, Culture and Employment has funding for not-for-profit daycares to cover startup costs and provides ongoing funding but it is tied to attendance. It also provides up to $5,000 per year to correct issues identified in fire inspections, and another $5,000 to address problems found during an environmental inspection.

Attendance-based funding is one of the major factors attributed to mounting troubles at the Inuvik daycare, which has dwindling enrolment and reportedly owes nearly $250,000 in back rent and other bills.

Moriah Hoyles was there with her 22 month-old daughter, Keltie. She described herself as a teacher who also works corrections, but does not take many shifts at the jail because she cannot work evenings or weekends. She needs the childcare but like many parents at the meeting, has reservations about the capacity of a volunteer board of directors.

“Personally, the idea of saying ‘put me on the board’ is daunting,” she said. “I’m willing to help but we need someone who knows what they’re doing.”

Another parent worried about board members “ageing out,” or withdrawing from daycare management once their kids are too old for it. That is a legitimate concern, since the group was told that exact scenario led to the demise of the last daycare at Mount Aven, which folded in 2004 after a manager and board members moved away.

“No one filled their roles, so they sold everything.”

Another meeting is scheduled for the third week of February in hopes of selecting a board of at least three people, preferably closer to six, with one serving as chair. At first blush, four people at the meeting indicated they would be interested in serving, with others saying “possibly.”

They would decide the shape the daycare might take, which could decide, among other things, whether to set aside a number of spaces for Aurora College students.