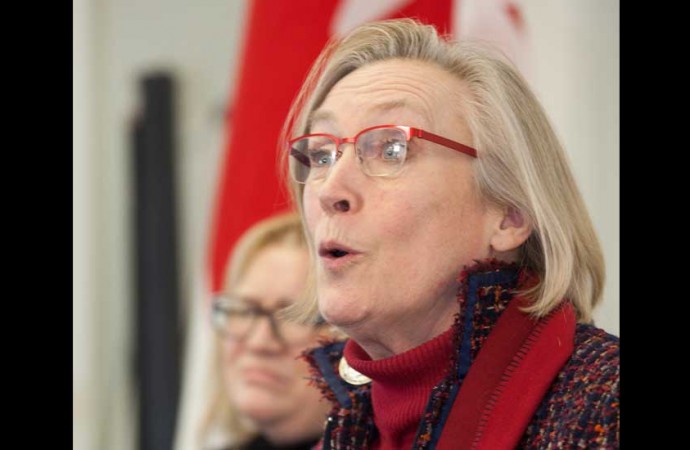 An inquiry into missing and murdered indigenous women and girls will launch by the summer, but its final form has yet to be determined.

The new federal Minister of Indigenous and Northern Affairs, Carolyn Bennett, was in Yellowknife last week with her parliamentary secretary, Labrador MP Yvonne Jones, and NWT MP Michael McLeod, to hear from victims’ families. Bennett continued consultations in Whitehorse earlier this week but not before meeting with Premier Bob McLeod Jan. 9 to discuss the inquiry and a host of other issues.

Chief among them was whether the inquiry would be dubbed “national” or “federal,” an important distinction that would affect its scope according to McLeod, who is also minister of Aboriginal affairs and intergovernmental relations.

“If it’s just a federal inquiry, they would only deal with federal responsibility,” he told the Journal Monday. “In my view, I would prefer a national inquiry so it would involve provinces and territories in a yet-to-be-determined role. I indicated our government would be very supportive of an inquiry in whatever capacity would be helpful.”

Bennett told reporters on Friday indigenous representation would be critical among the commissioners of the inquiry, other leadership positions and throughout the organization. She added the approach would not be pan-Canadian or even pan-Northern, but would recognize the differences and distinctions that exist between regions.

“Dealing with the Dene, as well as the Métis, as well as the… Inuit tradition, so what we’ve heard so far is they think it is going to be very important the commission understand the regional differences, that there be a recognition of the need for translation,” she said. “Even the recommendations may also be regional. As always at these meetings, there are things about the design, but also obviously advice that we will have to relay to the commissioners (in terms of) other things people want in actual outcomes.”

She said the challenge now is balancing the widespread desire to finally start the commission after years of anticipation, and the need to take the time to get it right.

McLeod brought the minister up to speed on his ambitious plan to resolve all outstanding land claims in the NWT during the life of the 18th Assembly.

“She indicated she was of a similar mind so we committed to write back to her with very detailed information on all these (land claim) files, and also outline a process where we could work together to begin moving to achieve this ambitious agenda,” he said. “We also talked about the outstanding issues with regards to devolution.”

Working with a new Liberal government in Ottawa, McLeod feels good about the prospect of resolving those claims.

“The Government of Canada has indicated they are going to be very flexible, and they don’t want to take a cookie-cutter approach to land claim settlements,” McLeod said. “Certainly, that gives me a good feeling that we’ve arrived in the right department to get it done. Minster Bennett, her parliamentary secretary and the NWT MP were in the meeting. I think we have a good team to work with and I think we’re going to accomplish a lot.”

McLeod said they discussed offshore drilling as well, indicating now may be the time to take the plunge on a new form of resource extraction.

“I indicated we wanted to start negotiations in offshore production as provided for in the devolution agreement,” he said. “We felt it’s a good time to get on with it when the industry is not very active and I asked for some detail on what the government thinking is with regards to a review of the environmental assessment that would be undertaken.”

The premier also brought up the letter Prime Minister Justin Trudeau wrote him while he was still just leader of the Liberal Party of Canada, in which he pledged to increase infrastructure funding and the northern allowance.

“We also talked about northern development, since that is in her title now, so we were wondering (about the implications of the name change),” he said. “We talked about the letter, which had some very great commitments for the Northwest Territories such as infrastructure funding, green bonds and assistance with investments in renewable and alternative energy, climate change, cost of living and housing. We wanted to get more detail as to what the government was planning in those areas. All in all it was a successful meeting.”