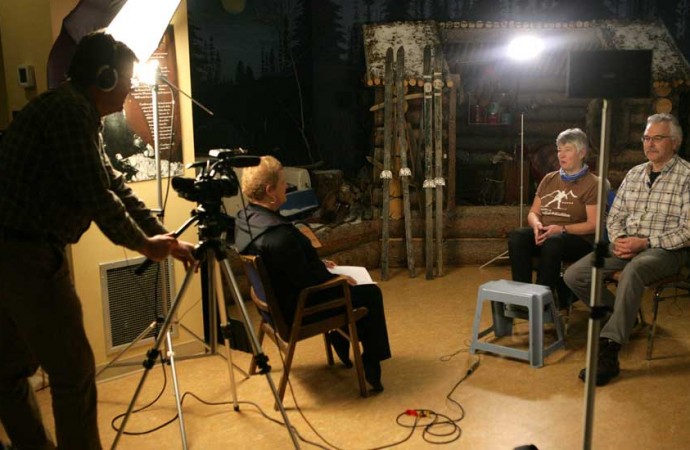 The Calgary museum’s director of exhibits and programming was in Fort Smith last week with a documentary crew in tow, collecting images, artifacts and interviews with people connected to the Arctic Winter Games.

Janice Smith brought Rick Castiglione, owner of Cielo Pictures, who was contracted to film 14 mini-documentaries to be included in a 22-gallery online exhibit of the history of sport in Canada since Confederation. The exhibit will go live in January 2017 in celebration of Canada’s sesquicentennial and will be up for five years.

One of the galleries will be dedicated to the Arctic Winter Games (AWGs), part of the broader theme of major sporting events in Canada, which includes the Olympic and Pan Am Games. Other main themes include diversity in sport, women in sport and the military and sport. The famous Firth twins, Sharon Firth and her late sister Shirley Firth-Larsson, who were inducted into the Hall of Fame last year, will also be featured.

Both Smith and Castiglione have other people working in the field to collect material, plus two researchers in Calgary and one in Ontario, but nothing was getting in the way of them travelling to the Great White North to discover the AWGs.

“We really wanted to come up and explore because we knew about the Brier and the Olympics but coming up here and learning more about the AWGs was really attractive,” Castiglione said. “Bobby Orr’s sweater is easy, but finding a Dene athlete’s skis from 30 years ago may not be as easy to find.”

The Moby Dick of the artifact hunt for Smith so far has been the AWG medals, which take the form of gold, silver and bronze ulus, the traditional skinning knife of the Inuit.

Smith is making an unqualified request for any AWG artifacts in the NWT. Contact either Canada’s Sports Hall of Fame or the NLMCC in Fort Smith and your relic could end up in the online exhibit, or in the new 20,000 square-foot facility in Calgary’s Olympic Park.

They interviewed a number of Fort Smith residents with ties to the AWGs, including Fort Smith biathlon coaches Patti-Kay Hamilton and Don True, reached by phone on Friday.

“Can I call you back in a bit, we’re right in the middle of a world cup biathlon event we’re watching right now,” the former CBC reporter said with the Canadian authenticity of a moose in a toque ordering a double-double at a Tim Hortons drive-thru, when The Journal called.

“They’re really interested in how the AWGs might be different from other events,” she said once the race had ended. “I’ve been to 11 of them, three as a competitor, many as a coach and two as a broadcaster and it really is unique. We’ve been to the Canada Games, and the national championships in biathlon and skiing, and what’s unique about the AWGs is the way athletes and coaches share camaraderie and friendship.”

She said it is commonplace to see a coach from one team helping athletes from another.

There is no guarantee all of the material gathered by Smith and Castiglione will end up in the online exhibit, in fact it is likely only a fraction of it will. Smith is aiming to have about 800 assets, photos and artifacts, with two-minute webisodes about several of the more fascinating items produced for the museum.

“Sometimes you have 100 times more stuff than you include,” Smith said. “But something I’m working on is trying to create a travelling exhibit of these themes we’re developing for the online exhibit. We just received funding for a military-in-sport travelling exhibit due to launch in June of this year. We’d really like to see (others) on some of the other topics. That would be subject to funding, but I think the Arctic Winter Games would be an amazing travelling exhibit. There’s just so much we’re learning that would be amazing to share with Canadians.”

The online exhibit allows people of all ages to access the material no matter where they are, which is appealing to Castiglione, who also works as a journalism professor in Alberta.

“A young person in Fort Smith who can’t easily get to the Hall of Fame in Calgary will be able to go online and look at these artifacts on their iPad, explore them and understand the history of sport not only in the North but across the country,” he said. “A young person in southern Ontario could go online and essentially have a peek inside the Northern Life Museum from a sporting perspective. It opens up a whole world of exploring and sharing culture for young people across our country. It’s a huge undertaking for the Sports Hall of Fame, but it’s going to be worth it.”