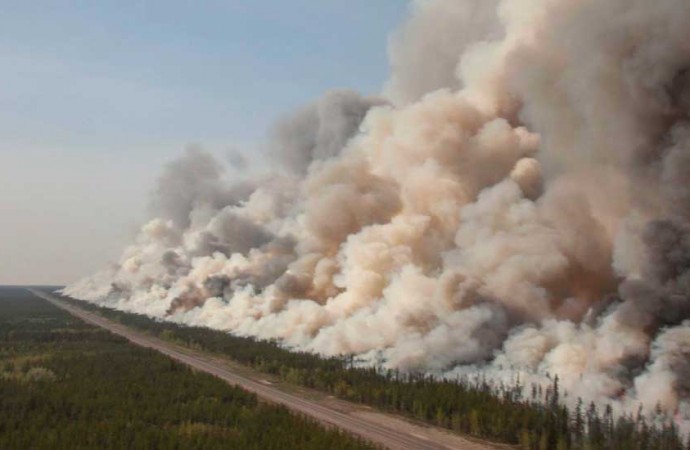 The international accord committing countries to slow global warming - hopefully to a manageable crawl - finalized at December’s COP21 conference in Paris, but it could not have come soon enough for the Northwest Territories.

Climate change continued to wreak havoc in 2015, with low water levels robbing the NWT of the ability to generate hydroelectricity while feeding a wildfire season second only to the year before in its intensity and cost.

If the trend continues, the cost of responding to five-plus years of drought and climate change-related events could exceed 10 per cent of the GNWT’s nearly $1.2 billion budget.

“In normal circumstances, precipitation falls in patterns you can count on, and there’s a certain range where the climate responds,” former energy minister Michael Miltenberger said. “That, for the most part, no longer exists, so you never know what to expect.”

Harsh drought conditions from 2014 set the 2015 season up for a hot start. A computer-based system for measuring drought found the driest conditions ever recorded in the territory in August 2014, with a rating of 1,024 in Fort Providence. A score of 400 is considered a drought; in spring 2015 the rating there was already at 350 and moved quickly to 485 by late May (400 in Hay River and 372 in Fort Smith), with some fires smouldering over the winter and popping back up in the spring after feeding on dry fuel under the snow.

Drought conditions also appeared to affect the whooping cranes of Wood Buffalo National Park, driving the number of nests found in an annual survey from 82 in 2014 to 68 last year. Low water in ponds forces the cranes to travel further to forage for food and leaves their nests more vulnerable to predators.
“Fires start earlier, they burn hotter, they last longer and they move faster,” Miltenberger said. “The broader issue, of course, is climate change.”

We have the power!

In 2015, the Northwest Territories Power Corp. was handed nearly $30 million more. The latter ruffled the feathers of regular MLAs as cabinet announced the decision before bringing legislation authorizing the payment to the house for a vote. Both times it was called “a stopgap measure,” designed to prevent the Northwest Territories Power Corporation from having to increase power bills of residents up to 25 per cent. Miltenberger was quick to point out that the severe drought causing or contributing to the low water levels at the Snare and Bluefish hydro systems was wreaking economic havoc in jurisdictions up and down the Pacific Coast and across the Prairies. Several regular MLAs decried the decision, calling it short-sighted.

Energy costs are the “black hole question of the day” for the NWT, former Yellowknife MLA Daryl Dolynny told the Journal on Sept. 3. Former Weledeh MLA Bob Bromley said the GNWT has sunk millions of dollars into one-off solutions with no return, money that would be better spent subsidizing wind and solar projects.

“Bumping up the subsidies to convince individuals to install solar could easily offset the cost of diesel and would create that benefit for the next 25 years.”