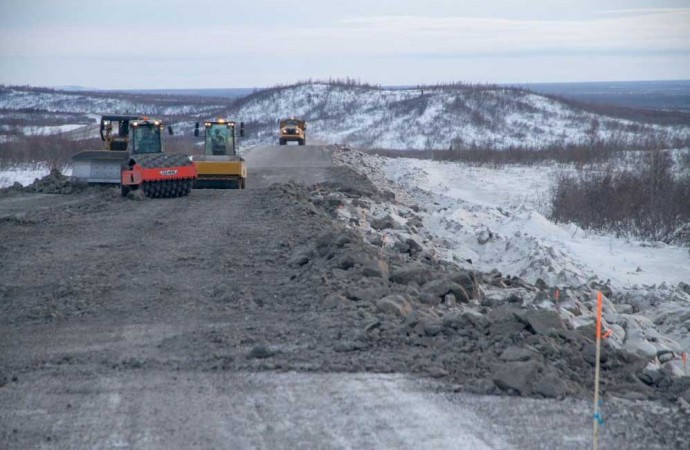 Workers grade out an embankment on the Inuvik to Tuktoyaktuk highway to protect the delicate permafrost below from the impacts of development. Image courtesy of the GNWT

How do you build a structure on shifting ground?

This is the question cold climate engineers are asked every day, as they set out to design infrastructure projects and buildings destined to stand in the northern reaches of the country.

“Up until the late 1990s, you kind of assumed that your climate was stable and whatever permafrost conditions you had today would be the same 20 or 30 years down the road,” said Ed Hoeve, an engineer with Tetra Tech EBA, based in Yellowknife. “Around 2000 we started realizing that was no longer a good assumption and now you have to take into account the possibility that the permafrost conditions will change over the life of your piece of infrastructure. One of my colleagues has put it best: it’s not catastrophic, it’s just one more uncertainty we need to factor into our design.” 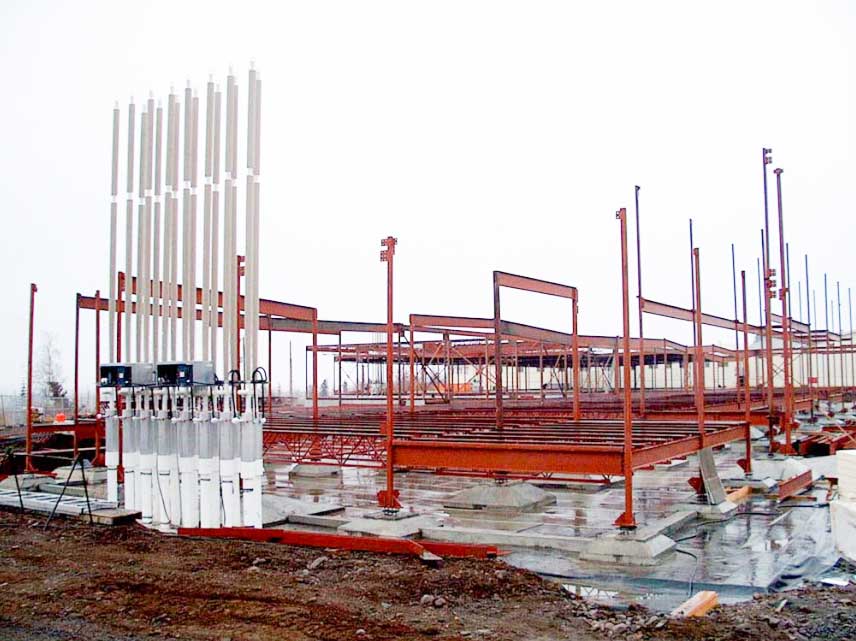 A thermosyphon system installed in the foundation of the Inuvik Regional Hospital.

The decision on how to handle the permafrost needs to be made early on in the design of the project, Hoeve said. This may involve plowing past the permafrost to build on more solid bedrock – an option possible in places on the southern end of the territory, where the layer might not be as dense – or factoring protective measures into the design.

“I’ve looked at ground temperatures in Inuvik and they’ve warmed up over the last 30 years,” Hoeve said. “The permafrost is getting warmer. So then, what does that mean for the types of things we design and build?”

There are numerous ways designs can work to protect permafrost. On a more basic level, smaller buildings can be lifted to ensure the heat is not absorbed into the ground.
Thermosyphons, devices that can be added into the building system, suck the heat out of the ground in the wintertime and “super cool” the ground through the winter so that it will stay frozen in the summer.

Though it is not a choice option, Hoeve said buildings can actually be designed to be more rigid and “adjustable” to deal with settlement issues. He described the option as being akin to re-leveling a house every year.

There are limited industry standards set for building on top of permafrost, Hoeve noted. 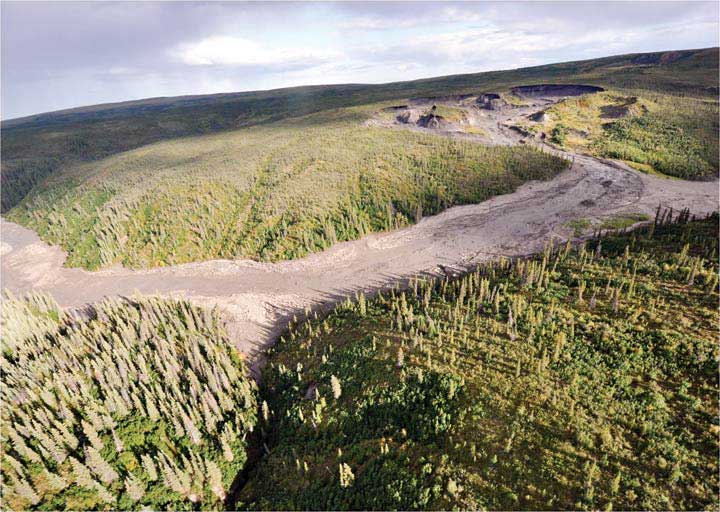 Northerners were witness to a dramatic scene as a lake, created from melted permafrost “fell off” a cliff last summer. The event was captured on camera by the GNWT.

“The first standard related to it was set by CSA (an international standards organization) and it wasn’t permafrost-specific but it was basically how to take climate change into account when you’re designing infrastructure on permafrost,” he said. “More recently, there’s a CSA standard for how you design and build the thermosyphon systems. There is another CSA standard that if you’ve got a building experiencing problems as a result of permafrost issues, there’s a protocol for how you assess that.

“The main standards for buildings is the National Building code. Within that, it basically says that foundations on permafrost need to be designed by somebody who is experienced in that field.”
This may soon change, with industry experts conducting extensive research on permafrost engineering.

“Right now across Canada there are about 16 experiments going on, looking at how to build infrastructure on top of permafrost, how to manage that delicate area where the permafrost has to remain frozen and cold in light of sunlight, in light of other rising temperatures,” said Kevin McLeod, director of highways and marine services for the Department of Transportation. “We’ve got four test sections that we are monitoring very closely just on Highway 3 here. We’ll have two on the Inuvik-Tuk highway, there’s 12 in the Yukon that we are part of a research team and there’s at least five in Quebec that we are monitoring closely.”

The majority of the research is addressing linear infrastructure, including roads and air strips. Currently, these projects are built on top of large, man-made embankments, created to lessen the human impact on the natural, seasonal cycles of the permafrost. However, as the ground underneath the embankments settles, engineers are witnessing growing faults and shifts.

“You talk to any engineer and he will say you have to try to predict the future and try to manage the risks in terms of dealing with any projects and thermosyphons, blowing cold air, a different rock structure, tubes that extract air or pump in cold air,” McLeod said. “All those kinds of experiments we are monitoring right now, to see which ones are the most effective.”