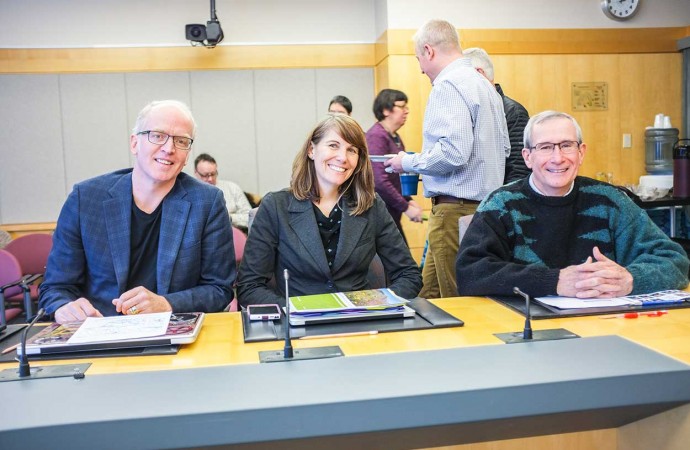 In Norway, lawmakers look at the implications of their decisions through a “next generation lens” with emphasis on the long term.

That country entered recession last during the 2008 downturn, suffered the shallowest dip and came out of recession first. Seeing something approaching that country’s depth of perspective from MLAs would be well-received in the Northwest Territories according to the authors of a new report urging calm in the face of the coming fiscal storm.

The GNWT has posted budget surpluses for five years in a row ($146 million in 2015) but a projected shortfall has the spectre of public sector service and job cuts rearing their ugly heads. In response, social justice champions the Council of Canadians and Alternatives North had researchers from Victoria and Edmonton-based Policy Link Research and Consulting return and look for options for the government to balance its budget without cutting public sector jobs. They did a similar exercise here in 2008 and argue that for every 10 civil service jobs cut, about five are lost in the private sector.

In their report David Thompson and Diana Gibson argue traditional austerity measures leave an economy weaker than one where public sector jobs are maintained, pointing to a 2008 letter signed by 117 economists stating it was “economically preferable” to raise taxes on top earners than to curtail state spending. They presented their findings to the 18th Assembly’s priorities and planning committee, which is chaired by Kam Lake MLA Kieron Testart and consists of all non-cabinet MLAs, on Jan 20.

“I think it was common across Canada and lots of other countries that several years ago with any kind of economic headwinds or anticipated budget shortfall, the reaction was ‘well, we (have to) cut, cut, cut right away,’” Thompson said. “Our point is, let’s actually take a look at the numbers and see what the opportunities are for balancing the budget. It turns out there are a lot of revenue options out there, too. We’re not actually advocating for anything, we’re just pointing out the different options and it’s obviously going to be a big conversation that has to happen in the NWT, so we’re not coming in with our wizard’s prescription on what you must do.”

The report aims to start the discussion on reshaping the tax regime in the NWT by illustrating that relative to other Canadian jurisdictions, there is wiggle room to increase income taxes on the territory’s top earners and hike taxes on products including alcohol and cigarettes. Per-night hotel and per-flight aviation taxes was also mentioned, as was an increased sales tax and raises to levies on aircraft fuel and gasoline.

They said a one per cent increase to the corporate income tax rate would generate $8 million per year, for example, and mentioned British Columbia collects $41 million annually with its carbon tax.

The social scientists were in the NWT in the first place to write a report examining economic opportunities in the Sahtu region for Alternatives North (see related story on page 6), who then decided they should do another job-cut avoidance exercise while they were at it. Like the Sahtu report, the revenue options report stresses the need to diversify the economy and teases at moving incentive spending away from non-renewable resource extraction and toward areas including energy efficiency, renewable energy generation, tourism, traditional harvesting, agriculture and forestry.

Will it work in the North?

At Wednesday’s noon-hour presentation, Nunakput MLA Herb Nakimayak wondered aloud whether adding taxes would fly in a region with such a high cost of living.

“With the state of the world economy how would that affect tourism and business, the cost of transportation?”

Thompson responded that the tax scheme could deal with that by becoming more progressive and creating exemptions on staples like food and power, even gasoline in places where traditional activities are essential, using tax credits for low-income earners or simply sending those people a cash transfer and giving them the choice to spend it on heating oil or insulation, store-bought groceries or supplies for going out on the land.

Julie Green, MLA for Yellowknife Centre, said consumption taxes make more sense in a territory where the top 20 per cent earn more than $100,000 per year and the bottom fifth of the population earns on average $16,400. The next fifth earns $34,400.

“You have more, you pay more,” she said. “And there are exemptions or cuts for lower income. I’d like to endorse this approach as something that would address our income disparity.”

Yellowknife North MLA Cory Vanthuyne said as a legislator he would be looking to avoid creating peaks and valleys of economic activity, trying to encourage moderation and stability.

“What I will be looking for as we go through the budget is efficiencies,” he said. “Programs and services have evolved in different departments over time, created with good intentions at the time and now sitting on a shelf but also being funded every year. It’s during these slow times a government should take the time to look at departments and evaluate efficiency. When the upswing starts again and every corporation and their friend want to get hands on your resources and the federal government wants to throw money our way, no one is in a position to deal with efficiencies.”

Member Bruce McDonald said the group has been concerned with language from the GNWT over the last year that warns of a dire fiscal situation and implies, as in 2008, that cuts to the public service may be unavoidable.

“I think almost the worldwide response to 2008 was that austerity was not the answer and Alternatives North thinks it’s not the answer here, either,” he said. “We think a stable public service is a long-range way to have economic growth. It’s not only in the North, that’s everywhere. You don’t want to have the public sector responding to private-sector problems because all it does is heighten the hills and the troughs.”

McDonald noted they wanted MLAs to hear an alternative to austerity while they were still forming their plans for the life of the 18th Assembly.

“We know the new legislature has new people with new ideas and we wanted to be able to be assured they had an alternative view to how economic development in the North could go.”