Cashmere goats kids dancing and prancing at the Northern Farm Training Institute in Hay River. The teaching farm discovered after purchasing several nannies that they were pregnant and now have 23 surprise kids romping around the grounds.Video courtesy of Kim Rapati/NFTI.

What is possibly the most prolific ruminant less than three feet tall in the Northwest Territories never set a hoof North of 60.

The proud poppa goat – we could call him Randy – had all of his business completed by the time Thomas Schenkel arrived at the British Columbia ranch where he had the run of the yard, jumping fences at will and loving every fine nanny he had the energy to. 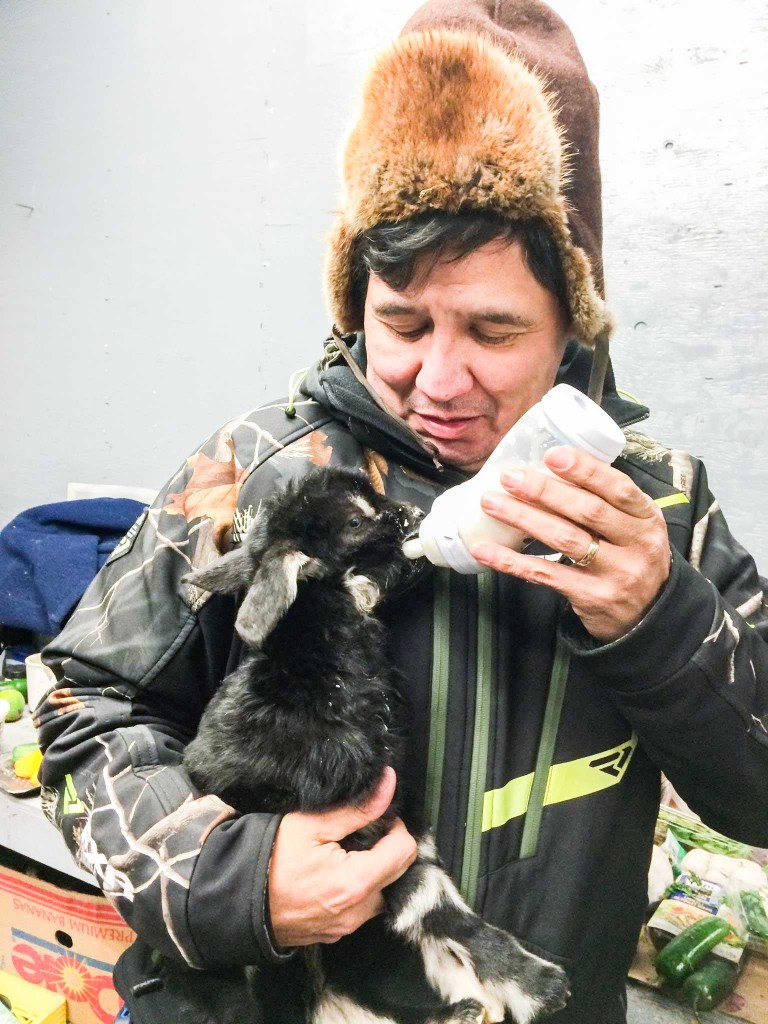 Sahtu Chief Wilfred McNeely Jr. nurses one of the more than 12 kids unexpectedly born at the Northern Farm Training Institute. Both he and his wife, Patricia, graduated from the NFTI education program in 2013 and stopped by to see the farm’s latest additions.

The result, according to Schenkel, the animal manager at the Northern Farm Training Institute (NFTI) near Hay River, was the unexpected and out-of-season batch of kids he purchased prenatally when he brought nine females and three immature male goats back with him in mid-August.

“We have probably close to 18 now, we’ve had a dozen kids and there are probably a couple more coming,” Schenkel said.

All of those extra mouths will be put right to work. Schenkel said NFTI was looking for goats because they feed on low-lying shrubs and bushes, which are in abundance at the farm, and not grass, which is in short supply. The goats will help clear the land to make way for more grasses to be planted, taking their place in NFTI’s responsible soil management program.
“They make it easier for grass to take over for multiple reasons.” 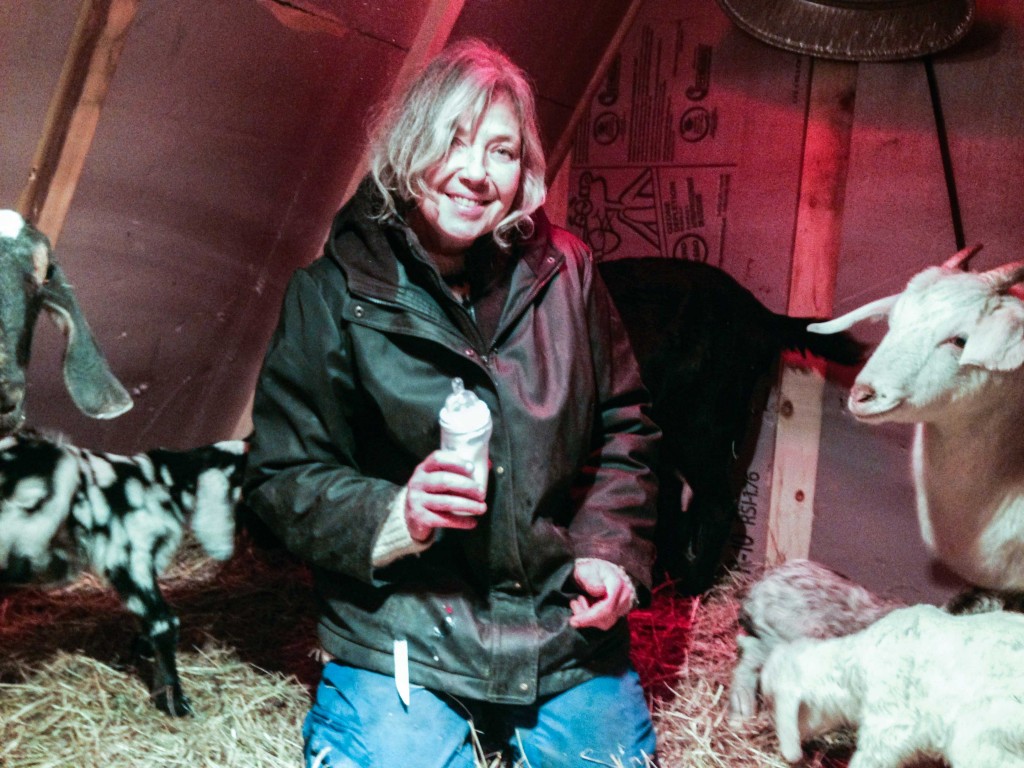 Agnes Thomas enjoys being fawned over by the hungry kids and their happy nannies.

The surprise kids caused some minor frantic action at NFTI, which aspires to teach Northerners to grow their own healthy food and improve the soil in the process. There is more than enough space for all the goats, Berkshire pigs and chickens at the experimental training farm, but Schenkel had to whip together some shelters for the goats, which generally do not do well in the cold.

That said, some of the goats Schenkel bought are cashmere goats, which grow an extra layer of fur in the winter.

“The hardest thing was finding enough heat lamps,” he said. “Both hardware stores in town had limited stock; it was after Christmas and the shipment was late. We got the stuff ordered late last week.” 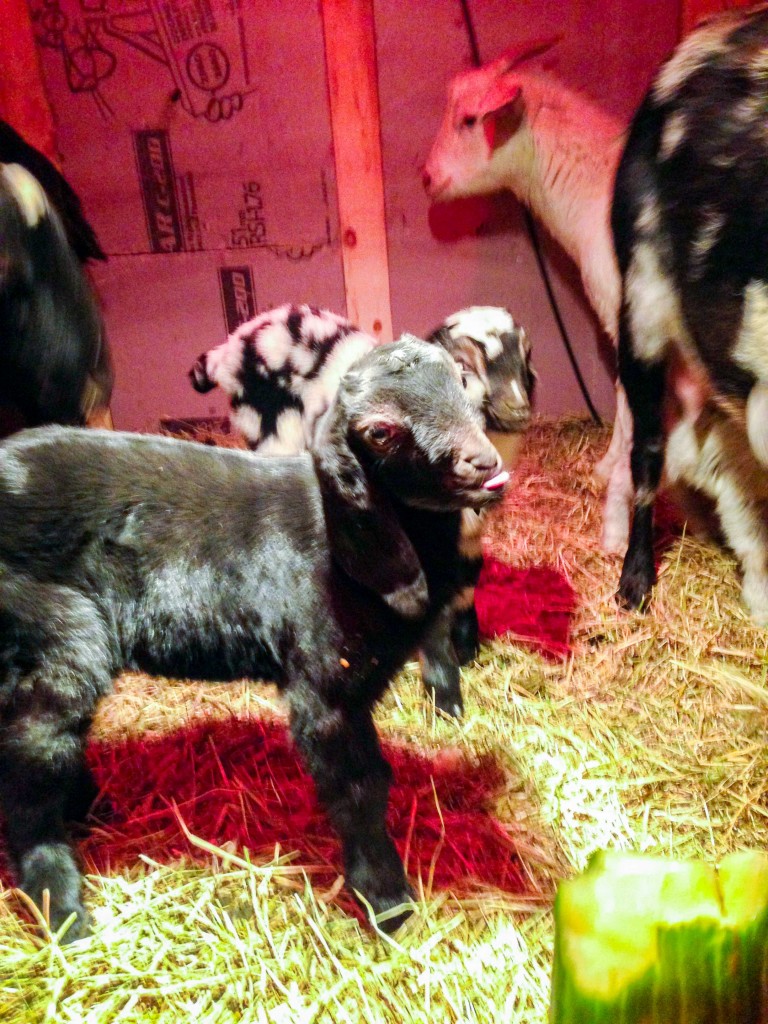 A “sassy” Nubian goat, one of the dozen or so kids unexpectedly birthed at the Northern Farm Training Institute in Hay River over the Christmas holiday and in January.

Originally from France, Schenkel has worked in animal husbandry across Canada, including a lot of time with horses, including thoroughbred racers, and goats. He had no reason to believe any of the goats would be pregnant at that time of year.

“It’s not unusual to have a birthing of multiple kids, what’s weird is the timing,” he said. “If they were in the wild, their heat cycle would regulate itself to match, with them mating in the fall and early winter and having babies in the spring, but they were left to their own devices. A buck was in there kind of running wild, he jumped the fences as he wanted and that’s how this happened.”

Female goats, or nannies, typically have kids in litters of two except in their first year, when they do not produce as much milk. Schenkel said first-year nannies usually have one kid, but two of the three he bought had twins. The third had triplets.

“Everyone is healthy and doing well,” he said. “We’re a little short on milk, those young nannies that had twins need a little help so we’re supplementing them with milk from the dairy goats. You have to be versatile in farming. Anything can happen.” 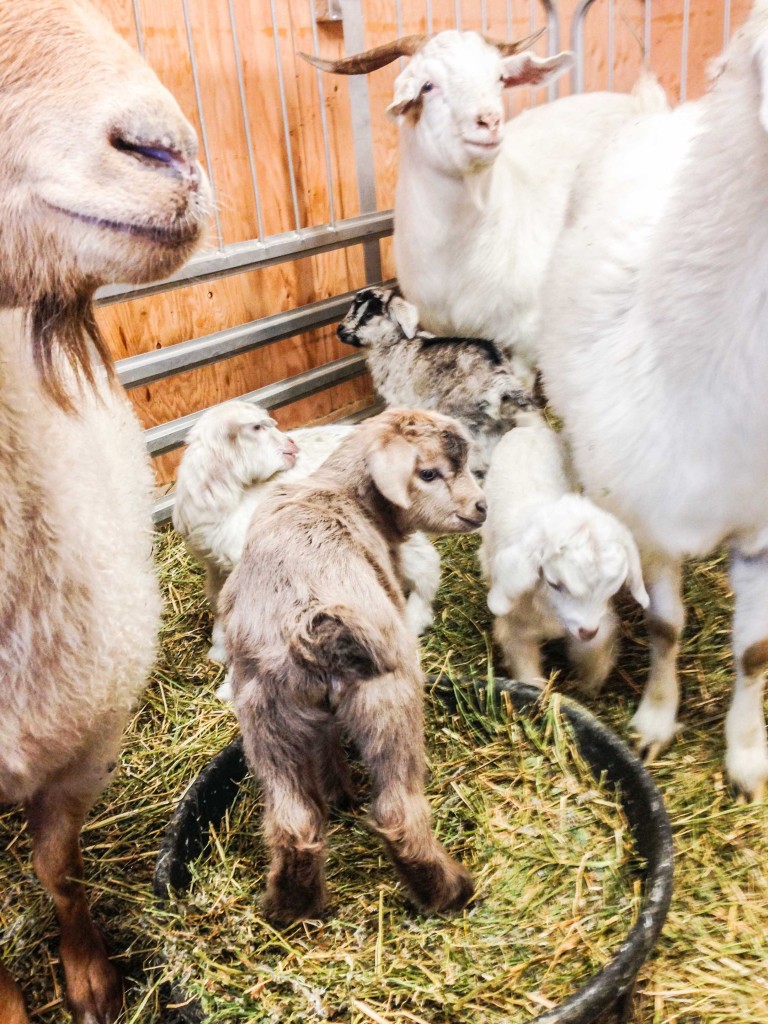 The NFTI managers had to quickly improve a series of shelters for the goats, most of which do not do well in the cold.