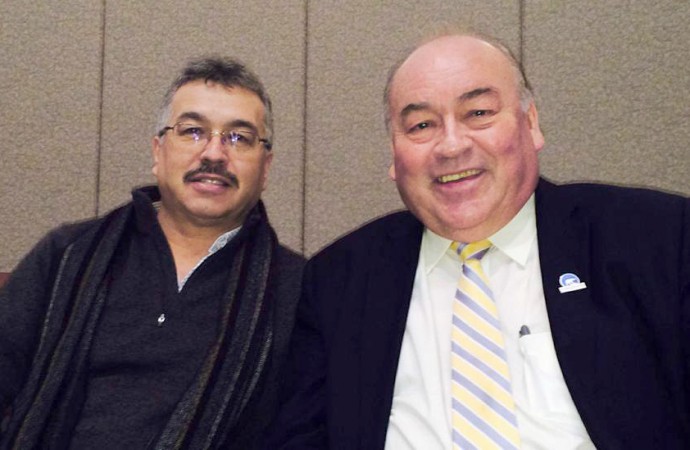 In the red corner, the reigning champ: first ever repeat NWT premier, eight-year veteran MLA and former career deputy minister who juggled four cabinet portfolios in each of the last three assemblies.

In the other red corner, a giant killer, the upset kid: thrice MLA of the Deh Cho, a Trudeau trustee who knocked off 30-year political veteran Dennis Bevington.
A dynasty is born. The brothers McLeod, Premier Bob and MP Michael, sons of Fort Providence, poised to lead the NWT out from under the shadow of a decade of Tory rule and backbench NDP representation. They are serving together, each with a bulletproof four-year mandate.

Who else could the Northern Journal name as our 2015 Newsmakers of the Year than the Brothers McLeod?

The McLeod brothers were both elected to the 16th Assembly alongside then-premier Floyd Roland, who later ran against Michael as a Conservative for the seat in Parliament. Now, with Bob, a committed long term Liberal at the top of the hill in the NWT, and Michael firm a foothold on the Hill of all hills in Ottawa, the new Liberal stronghold, things seem to be looking up for the NWT – at least as far as good political connections go. How that will all translate into good things during tough economic times remains to be seen.

The Liberal connection was irrefutable to pundits who presumed Bob was leveraging that “strength” during the pre-premier election horse-trading among MLAs. Due respect to all parties involved and all cynicism aside, logic dictates that having a sitting premier who as a child had the same street address as our new government-side MP has to potential to be an almost perfect alignment.

Here are some of the areas where we expect to see action, if not fireworks, in the coming year.

After years of being whittled away by inflation, the NWT rate payer’s Holy Grail, the federal Northern tax deduction, has a new lease on life with a capital L. Premier McLeod stated emphatically during the campaign that the deduction needed to be increased immediately, emphasizing that word in an email with bold and underlined. He said the tax credit should also be increased annually.

MP McLeod agrees, he told the Journal the same day his brother was re-elected premier that all of the Liberal campaign promises, which included a one-third increase to the deduction, were still on the table.

At the risk of oversimplifying, this may be a very good time to be optimistic about new land claim settlements in the NWT. Premier McLeod had ambitious and inspiring words for newly elected MLAs in December, calling on them to settle all outstanding claims before 2020.

“Because of the importance of this issue, I propose a joint committee between regular members and cabinet to provide oversight and give direction to our negotiators on files dealing with Aboriginal land and resource agreements,” he said in his premier selection address. “Let’s get these land claim agreements completed, all of them, in the life of the 18th Legislative Assembly. “

“We have to sort out some of the challenges that are causing problems with the land claims moving forward,” MP McLeod told the Journal in July. “There’s land use plans being developed in every one of the land claims areas, and I think those need to be accepted or finalized so that people know what the rules are, what the policies are when they’re going into an area – what to expect.”

The brothers McLeod may end up butting heads over hydraulic fracturing, or fracking, in the NWT. The GNWT kept fracking top of mind around the territory in 2015, touring 12 communities to gather feedback. Given the strong emotions that surround the issue, the results of that tour may have a major impact on this year’s territorial politics.

“We must accelerate the full transfer of authority from the federal government and develop a made-in-the-North regulatory system,” McLeod said. “We need to be in full control of decisions that will enable other environmentally sustainable resource projects to move forward in a timely manner.”

He said in response to a pre-election survey by the NWT chapter of the Council of Canadians, which opposes fracking, that he would not support a moratorium nor a ban of fracking.

MP McLeod, however, said before the federal election that fracking needs to be dealt with at the national level, and must take into consideration the concerns of the public.

“The Liberal Party has already stated that we need to draft legislation governing this issue at a national level, and I totally agree,” he said. “There is concern. There are a lot of unknowns about fracking, and while the [NWT] government has the ability to grant permits, the people still have a social licence to object to it. We need to make sure everything that needs to be known about fracking is available.”