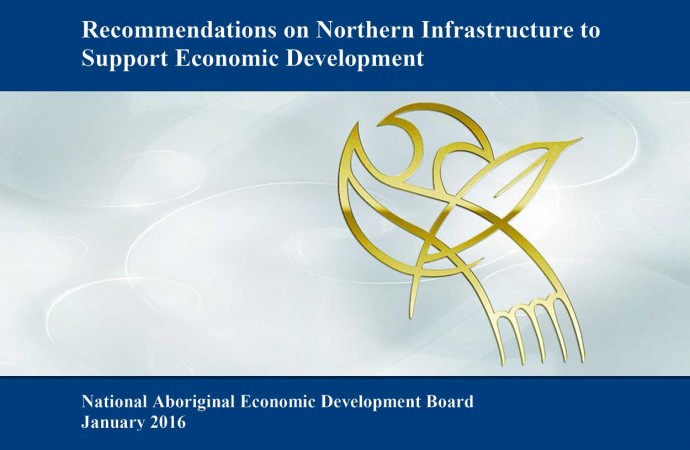 The National Aboriginal Economic Development Board has released a new report.Image courtesy of NAEDB

The National Aboriginal Economic Development Board (NAEDB) aims to position Northern indigenous communities to get their share of a promised boost to federal infrastructure funding.

“We feel the time is now to get everything put in order so we can focus on upcoming opportunities,” board member Hilda Broomfield Letemplier said. “As part of the report, we welcome the federal government’s stated commitment to increase infrastructure spending in Canada.”

Among other things, the report recommends further study on whether creating a pan-Northern development fund would be beneficial, changing the tax structure to make investing North of 60 more attractive and creating a dedicated fund for Northern infrastructure.

Broomfield Letemplier, who in her day job is the president and chief financial officer of Pressure Pipe Steel Fabrication Ltd. in Happy Valley-Goose Bay, Nfld., would not discuss specific industries with the Journal but a press release about the report mentions only mineral exploration.

“World demand for resources has brought global attention to Canada’s North,” it reads. “In 2011, total mineral exploration expenditures in the three territories were approximately $914 million, representing an 85 percent increase from the previous year.”

According to the board, which was established in 1990 as a Governor-in-Council appointed body to give the federal government policy advice on Aboriginal economic development, each dollar spent on Northern economic infrastructure has the potential, “if invested wisely,” to generate $22 in economic and fiscal benefits.

It said, a report by GE Canada showed Northern business and community leaders consistently rank improving infrastructure as the “single most important” criteria for attracting investment in remote locales.

“We want to support any and all projects that are looking forward to doing work in the North,” Broomfield Letemplier said. “The indigenous people … we live there, we’re not leaving, we want to be there. Huge companies come in and support infrastructure (construction) or expand on existing infrastructure. Those companies really are doing a great favour for themselves and for the people that live there because they hire us, they train us and we’re a really good resource for them.”

The report builds on research on infrastructure and economic development conducted throughout 2014-2015 by the NAEDB, including a report on needs in Northern Aboriginal communities conducted by the Conference Board of Canada on their behalf. The board also has consulted with Northern leaders at a roundtable on infrastructure and economic development that Broomfield Letemplier and other board members hosted last June.

“We hired local indigenous consultants and we actually went and sat at the table and polled different groups and organizations from the North,” she said. We actually interviewed those companies and got information to put in the report.”

She said the NAEDB intends to continue to highlight concerns they have for Northern indigenous communities in 2016.

“We’re also going to work with profiling a company who has gone up North and really is an ideal candidate to show how it can be done right for the benefit of everyone involved.”

“The call by the board for bold investment in nation-building infrastructure projects alongside community-level investment would make the Northwest Territories more inviting to the resource development sector, improve the quality of life for all Northerners through job opportunities and strengthen and diversify local economies,” he said. “The need for federal investment in key infrastructure areas will improve indigenous engagement in planning, decision-making and business development opportunities, making them true partners in our success as a territory now and into the future.”

He said the GNWT will work closely with Canada to access funding promised during the 2015 federal election by Prime Minister Justin Trudeau for infrastructure, energy and housing.
“By securing federal funding in these key areas, the GNWT will be in a position to improve its economic situation moving forward,” said Premier McLeod. “While the need for small-scale, community-based economic development is an important part of the puzzle in diversifying our economy, the choice should be left to communities. Its contribution to our economic stability is important, but without infrastructure and a strong resource development sector small-scale economies become closed and stagnant.”

“Settled claims in several regions of the NWT already provide a strong foundation for Aboriginal and public governments to work together to promote economic and social development,” he said. “The GNWT doesn’t make assumptions about what Aboriginal people in the Northwest Territories and their governments want. We work directly with them to find solutions to the issues and challenges they face.”