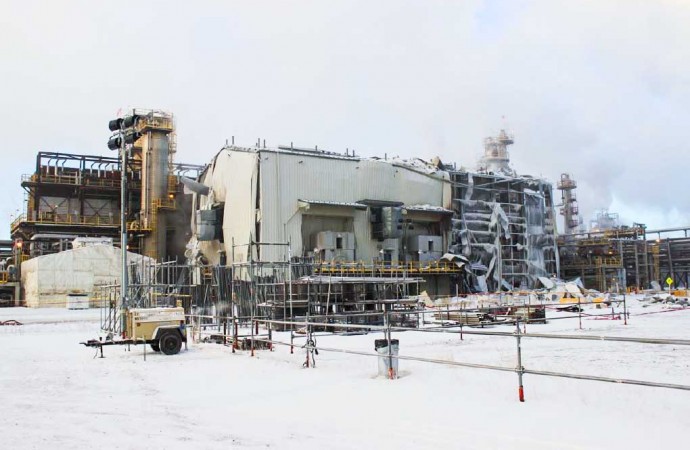 An explosion at Nexen’s Long Lake operations killed one worker and injured another on Jan. 16.Photo courtesy of Nexen

An on-site explosion at Nexen Energy’s Long Lake facility, a subsidiary of Chinese-owned CNOOC Ltd., has shut down operations after one employee was killed and another critically injured.

In a press conference held Jan. 16, CEO Fang Zhi called the incident “one of the darkest days in Nexen’s history.”

A release from the company states that the explosion happened in the site’s upgrader, near the hydrocracker unit, which combines hydrogen with partially-upgraded bitumen to remove sulphur during the production of synthetic crude oil.

Shortly after the explosion, Nexen stated the affected facility was closed and the site stabilized. Long Lake’s upgrader was also shut down, and the steam-assisted gravity drainage (SAGD) facility – multiple wells drilled into the underground reservoir, using steam to release the bitumen so it can be pumped to the surface – have been set to minimum production rates.

A stop-work order is currently in place for the facility, located 75 kilometres south of Fort McMurray, as the incident is being investigated by both the Alberta Energy Regulator and the province’s Occupational Health and Safety organization.

“We notified the regulator immediately and are fully cooperating with authorities investigating this accident,” reads the statement. “We have already begun our own internal investigation to determine what caused this tragic accident.”

The release sent out by Nexen did not give the name of the injured employee, but stated he was sent to a local hospital before being transported to Edmonton for further treatment.

The incident occurred only months after the same facility was shuttered following an emulsion leak from a pipeline. On July 22, 2015, about five million litres – or 31,500 barrels – of bitumen, water and sand mixture spilled across 16,000 square-metres in what is considered one of the worst leaks in Alberta’s history.

“Our motto is … there’s nothing so important that it cannot be done safely,” Zhi said. “Yesterday, we did not live up to that standard, and I deeply regret it.”

“I can’t imagine the pain and devastation this has caused for the families (of those employees) and for that we’re sorry,” Ron Bailey, Nexen’s senior vice-president of Canadian operations, said.

“Every day we strive to send our employees home safe to their families and yesterday we did not live up to that.”