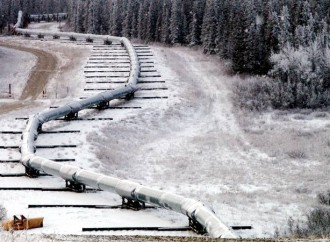 Canada is in a turmoil over pipelines and its oilsands bitumen is stranded as route options to the south (Keystone) and west (Trans Mountain) are in limbo. Now, an eastern route is uncertain as mayors in the greater metropolitan area of Montreal block it, mainly over environmental concerns around possible pipeline ruptures.

The only ones happy about this national predicament are railroad companies that enjoy a boom as they haul tens of thousands of tanker cars across rivers and through cities, traversing the country as they transport bitumen and oil to market.

There is a certain irony in the fact that the loudest pipeline proponents are the socialist premier of Alberta backed by the ultra liberal mayor of Calgary. One would think those two should be leading the charge advocating a move away from fossil fuels to stop climate change, yet they are unlikely advocates for increased bitumen production, regarded as “dirty oil” because it produces more greenhouse gases than conventional forms of oil. They have to take on that role, championing the key to prosperity in their economy, everyone ‘gets that,’ yet it is unusual.

It is odd, too, that Quebec mayors would oppose a pipeline resulting in a de facto endorsement of railway tankers as a preferred means of oil transport after a tranquil Quebec community not far from them became an inferno when a railway accident killed 47 souls and dumped millions of litres of oil into Lac-Mégantic in 2013. Energy East will apparently be able to transport 1.1 million barrels of oil per day, equal to 1570 rail oil tanker cars per day. Pipelines do leak from time to time, but really, how can those mayors consider railway oil tankers safer?

The Energy East Pipeline would supply refineries in Quebec and New Brunswick, creating hundreds of jobs and delivering Eastern Canada from dependence on foreign oil that costs Canada about $26 billion per year. They seem to have missed that.

Look to the pipeline companies as the culprit in all this mess. Aging pipelines, too often poorly constructed, routinely rupture causing environmental disasters, giving the industry a bad name. That needs to be rectified, in a hurry. Surely there is a way to build a failsafe pipeline that lasts hundreds of years. The pipe is protected underground and does not move, after all. How hard can it be to up the standards and improve build materials? Until that happens, until pipelines regain the public’s trust, opposition will continue to impede them.

Montreal Mayor Denis Coderre, a former Liberal MP and cabinet minister, is the spokesperson against using the Energy East pipeline to carry bitumen, but he is not alone. Cities in the surrounding area – a substantial population – are behind him. That is a key area of strength in Quebec for the Trudeau Liberals – a bit of a pickle for the new government. There are likely similar sentiments across Quebec. La belle province pitted against the rest of the country over an emotional issue would be a dream come true for the flagging separatist movement.

The premier of the NWT made national news last year when he offered up the NWT as an optional  pipeline route, but he was never taken seriously. Let’s consider that Northern option. There are proven reserves of oil in the Sahtu that are also stranded until a pipeline to markets is built. Premier Bob McLeod is also advocating for offshore drilling in the Arctic. If oil is eventually found there, are tankers a desirable option with treacherous sea ice and massive storms with hundred-foot waves, especially at a time when weather is becoming less predictable and more severe? Maybe a pipeline for that oil makes sense too – if drilling in the Arctic Ocean is ever a real option.

Both sources of oil might benefit from a pipeline through the Canol Pass west of Norman Wells, across Yukon ending at Juneau or Anchorage, Alaska. Build a pipeline now to carry bitumen from the south, creating construction jobs in the NWT for the next decade, completing the Mackenzie Valley Highway in the process, and then maybe a decade or three down the road when the Sahtu and Arctic Ocean oilfields start producing, connect them, too. If Alberta and the NWT are going to continue to pit their future on selling oil, even in the face of a movement away from fossil fuel use, a plan like that makes sense.

If an NWT pipeline for oilsands bitumen and offshore drilling in the Arctic are both serious considerations for the future NWT economy as Premier (and economic development minister) McLeod says they are, he should hold talks with the Dene and Inuvialuit leaders in the Mackenzie Valley as a public process to ensure all are on side and a majority of the people of the NWT are in favour. Put it to the test. Let’s find out now if those plans will be supported and realistic. If not, move on to other goals that are achievable.