Ride for Hope celebrates 10 years on the frosty trails 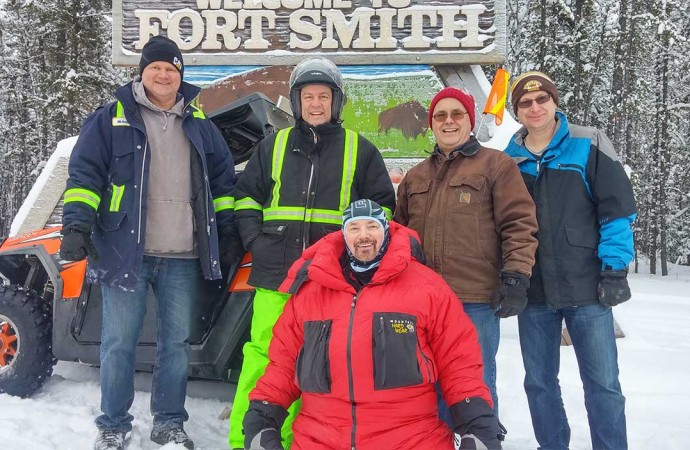 Ken Krahn, kneeling, has led the Ride for Hope from Fort McMurray to Fort Smith for 10 years. With him are Hans, Sheldon, Al and Mark.Photo: Craig Gilbert

Not even a broken head bolt could stop them.

It did slow Ken Krahn and Hans Nundel down, making them late for their 10th annual arrival in Fort Smith last Thursday. The equipment malfunction happened just a few kilometres outside of the NWT border town, causing one of the Arctic Cat side-by-side ATVs they drove up from Fort McMurray for their yearly Ride for Hope in support of the city’s homeless shelter to start spitting oil and smoke.

“Luckily one of the cars behind us on the road noticed it and let us know,” Nundel said.

The ride raised more than $130,000 for the shelter in its first nine years. Their goals have been more modest of late, with the downturn in the economy and the dropping price of oil eating in to their haul.

“It all goes to the Centre of Hope and they use it for whatever they see fit,” Krahn said. “It’s mostly for warm clothes and socks. People can go there and use the shower, they teach them hygiene, have some that help with medical issues. They’ve been in business 10 years and they keep growing and growing.”

The riders continued on to Hay River for the first time to mark the 10th anniversary of the ride but Krahn broke an axle a few kilometres out. They usually turn around in Fort Smith after a stay at the Whispering Pines and a refuel at the TDC cardlock.

The managers at TDC give them a discount on the fuel and allow them to lock the machines up overnight, keeping them secure and allowing them to dry out.

The goal of the ride is two-fold: collecting cash is an obvious objective, but raising awareness is another important factor.

“When you’re riding in the cold, we’re all geared up, but this morning I forgot my winter boots so I got a pair of rubber boots out of the back of the truck and I had cold feet the whole way,” Nundel said. “That’s the reality for homeless people, they live on the street, they sleep on the street. Depending on what they get for footwear, they may have cold feet all the time.”

Stephen Bryant, executive director of the Centre of Hope, said donations are the lifeblood of the 365-day-a-year facility.

“We try to make sure that we have warm clothing for our patrons, toques and gloves, jackets if we can,” he said. “What we really need, though, is to be able to keep our doors open all year and that is made possible by donations. It’s extremely important.”