Solely on solar: NTPC eyes the sky for power solution 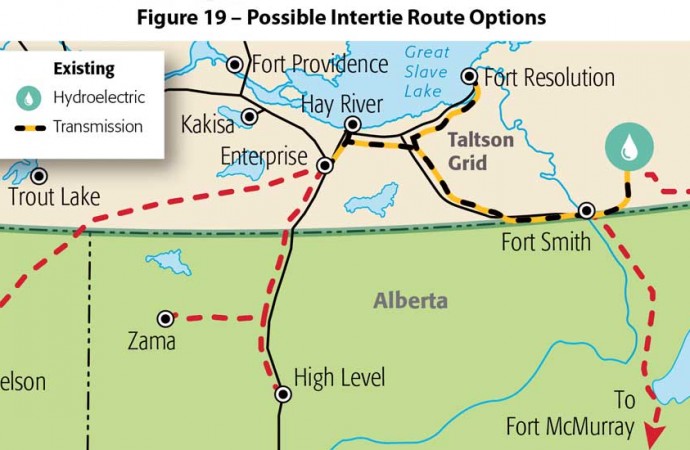 An NT Power illustration shows the potential paths of an interconnection to the continental power grid.Illustration courtesy of NTPC

Small-scale green energy projects in the near future and an interlink to the continental grid via Saskatchewan on the horizon form the foundation of the Northwest Territories Power Corporation’s (NTPC) plan to get power rates under control.

A variety of solar energy generation projects and studies on the feasibility of wind power will roll out across the NWT in 2016, according to NTPC president and CEO Emanuel DaRosa.

“Wind looks like the best opportunity for thermal communities to replace diesel,” he said. “About 18 to 22 cents per kilowatt hour is what we expect to achieve in larger communities like Inuvik.”

After witnessing the focus on small, community-based solutions at the most recent GNWT energy charrette, the NTPC started developing a power system plan that addressed both the broader energy system as a whole and individual communities. Wind studies are underway at Storm Hill and High Point near Inuvik and have just begun at the Snare Hydro complex north of Yellowknife.

“The objective is to manage any incremental growth in Yellowknife with wind,” DaRosa, who spent 20 years in the Ontario hydro industry, said. “We think we can probably handle 20 to 30 per cent load growth with wind simply by blending it with our hydro operation to provide more energy to the customers and continue it down the renewable path as opposed to moving on to any fossil fuels for load growth there.”

DaRosa said living in the shadow of the Rockies can make finding a brisk enough breeze to power a town challenging, which, perhaps ironically, is where solar comes in. DaRosa said the company typically needs three years of agreeable wind data to justify installing a farm.

“Where wind isn’t a viable option in thermal communities, in order to displace diesel we also look at solar,” he said. “The cost of solar is considerably higher than large-scale wind and it would come in at 40 to 50 cents per kWh, which is above the incremental cost of diesel, the cost of generating the next kWh of diesel.”

The NWT is second only to Ontario in terms of solar energy generated per capita. The corporation plans to install solar farms in Fort Liard and Wrigley in 2016, and to cut the ribbon on a new solar/diesel hybrid plant equipped with batteries in Colville Lake in May.

“I would suggest it’s probably one of the most advanced diesel/solar hybrid systems in the world,” DaRosa said. “I would expect that through most of the summer that diesel plant won’t run at all and that community will be powered solely on solar.”

Like Fort Simpson’s solar farm, the Colville Lake build was heavily subsidized by the GNWT, which is why they can produce energy from the sun more economically than by burning diesel.

More potential for a small-scale project exists in Fort Smith, where four town buildings and two commercial customers of NTPC have applied to make use of surplus electricity from the Taltson Dam complex to power HVAC systems. About 2 MW worth of power is lost in the form of water being redirected around the dam, power that could be sold via a separate meter at a cost of about 9.8 cents per kWh, provided the distribution and transmission system can handle the extra load, and there is no significant cost to connect the buildings to the grid.

DaRosa said to really stabilize the cost of electricity in the NWT, however, an interlink to Uranium City, Sask., about 200 kilometres southeast of the Taltson Dam, has to be the goal.

“Until we have that, we are always going to be 30 per cent inefficient because most of the water rise is in the summer, while most of our loads are in the winter,” he explained. “They’re not in alignment and we can only hold back so much water. Once have interconnection, every kWh a plant has available to it will be delivered to the system. In the summer, we’ll likely be selling power to the south, in the winter we’ll likely be buying power. An interconnection is not to sell power, it’s to make the system much more efficient and reliable.”

The Uranium City link is phase one of the NTPC’s long-term plan. It would be followed by an incremental expansion of the Talston facility adding between 65 and 200 MW of capacity, the interconnection of the north and south Slave grids and then linking to the diamond mines, which burn about 100 million litres of diesel every year.

“A connection would not only move them off diesel to much greener sources of power, but also potentially lower their operating cost and increase mine life,” DaRosa said. “There would be some economic benefits for the territory as well. Supplying mining customers helps us spread our administrative costs over a much larger base, lowering costs to all residents of the NWT.”