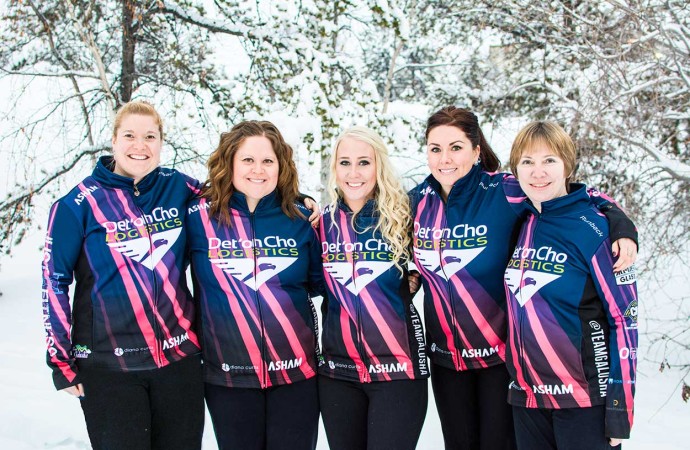 Playing out of the Yellowknife Curling Centre (from left), Shona Barbour, Kerry Galusha, Megan Cormier and Danielle Derry will represent the Northwest Territories at the pre-qualification round ahead of the 2016 Scotties Tournament of Hearts in Grande Prairie this weekend. Joined by alternate Sharon Cormier (right) and coach John Epping, they will have to beat out fellow relegation teams Yukon, Nunavut and British Columbia to stick around for the rest of the national women’s curling championships Feb. 20-28.Photo courtesy of Kerry Galusha.

Just two more years of this relegation stuff and championship curling in Canada will return to a more familiar and, frankly, more friendly format.

The 2017-18 season cannot come fast enough for Kerry Galusha and the rest of her Yellowknife Curling Centre rink, third Megan Cormier, second Danielle Derry, lead Shona Barbour and alternate Sharon Cormier. In the meantime they are focused on edging out fellow regional champions from British Columbia, Nunavut and Yukon in what is called the pre-qualification tournament over this coming weekend in advance of the 2016 Scotties Tournament of Hearts in Grande Prairie Feb. 20-28.

For this season and last, Curling Canada shook up the structure of its national championships, the Scotties (formerly the Scott) and the Brier, by forcing teams with the worst records into relegation. The change drew swift criticism from male and female curlers; among their chief concerns was the erosion of significant and storied national championships for the sake of saving a few bucks on the length of the tournament. How could it be a Canadian championship unless it represented all of Canada?

The rule change disproportionately affected Northern teams who face a significant cost and logistical exercise in bringing five players plus a coach and any supporters along for the ride across the world’s second-largest country by landmass for the national tournament. Last year, when Galusha’s rink lost the relegation final to Tracy Horgan and team Northern Ontario 7-6, that meant they made the trip from Yellowknife to Moose Jaw, Sask. for three games, less ice action than they would get at a weekend bonspiel.

Last year was a learning experience all around. Just three years previous, Galusha won the long-running Ford Hot Shots skills competition at the 2012 Scotties in Red Deer, taking home a two-year lease to a new vehicle. Relegation teams do not qualify to send members to the individual skills competition, in fact the Hot Shots and the NWT-NO final took place at the same time at last year’s Scotties, hours before the start of the tournament proper. This year, they have been scheduled farther apart.

“They were announcing numbers (from the skills competition) over the intercom while we were trying to throw our shots,” Galusha said, still sounding almost surprised. “That’s why we have a 7:30 a.m. game Friday (this year). After we had lost and it was nationally-televised there was a huge outcry about it and we got lots of support so it was good in that sense, but it was really hard on our team.”

The changes have been reversed but will not take effect until the 2017-18 season, in other words, after the 2018 Winter Olympic Games in Pyeongchang, South Korea. Rules are kept consistent within an “Olympic cycle” to avoid jeopardizing Canada’s chance of qualifying for the games.

Galusha’s rink is the only team to have already gone through the pre-qualifying round, which she sees as an advantage heading into  the next stage of competition.

“It was a little bit of a tough weekend for us last year but we feel like we’re a lot better prepared for it,” she said.

They are also the only rink on the women’s side in the NWT that spends a lot of money seeking out serious competition and practices weekly to prepare for the national stage. Galusha has been to 10 Scotties as a skip, her lead Barbour, who lives in Inuvik, has been to eight. Even Cormier, their youngest member, has five hearts on her pendant plus an appearance as a skip at the juniors in 2007.

“We have a lot of experience. What we lack is getting games in against top competitive teams,” Galusha explained. “That’s what happens: we go down to the Scotties and everyone knows we’re a good team, it’s just we miss shots we should really be making at the level we’re at but we don’t get the games in so we’re not as consistent. So we’ve been working to get more games in and we feel we’re a bit better prepared this year.”