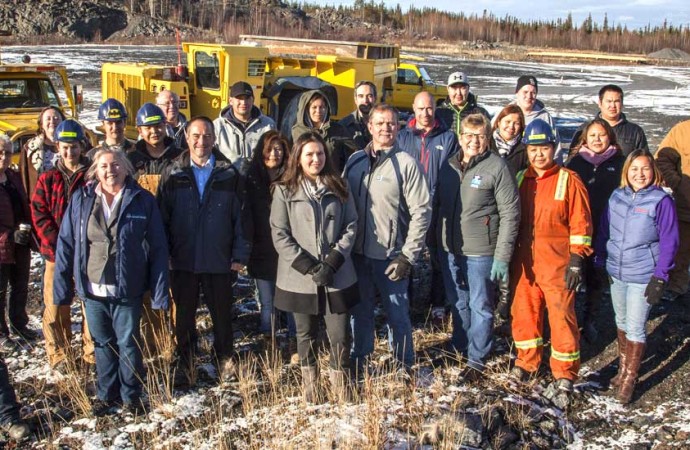 Mine Training Society stakeholders, including Aurora College and members of the industry, gathered for a recognition event in Yellowknife last fall. Despite the slowdown, mines are expected to need thousands of workers in the next five years.Photo by Bill Braden

Mining in the NWT may be under pressure, but the Mine Training Society (MTS) that provides its skilled workers is still hopping.

“We knew Snap Lake was going to be closing, that was known in the industry because of their water problem,” she said. “We’re still working with them to develop more surface miners because Gaucho Kue will be (open pit). We’re working with some of the individuals who were laid off to obtain employment elsewhere. A lot of the skills we work with are transferrable to other industries, including road construction, especially with the talk of the permanent road up to Whati, and to Norman Wells.”

The MTS, which is government-funded and works in partnership with industry and Aurora College, is also busy helping companies replace retiring baby boomers, who are deciding in droves they never again will go underground.

Canada’s mining labour force is older than that of other sectors. The median age of a miner in the NWT was 32 years in 2013, eight years younger than the national average. However almost 15 per cent of them were 55 years or older in 2011.

“That’s where the bulk of the new jobs are coming from,” she said. “We still need employee replacement and retirement is a big chunk.”

Released in 2014, the GNWT report Northwest Territories Mining Hiring Requirements and Available Talent Forecasts used data including NWT-specific commodity prices, mining GDP and factors like major mine construction and what advanced development is underway in the territory to project the number of workers that will be needed over the next decade in three scenarios: baseline, contractionary and expansionary.

The report drilled down on 66 different occupations within the mining sector, including mine support and service, and found most of the jobs would be in the trades and production, making up 745 of the 2,170 openings projected in the baseline scenario.

The highest requirements are projected to be in occupations including underground mining,  millwrights and industrial mechanics, geologists, geochemists and geophysicists.

“We had our board meeting on Friday with our mining partners (present), and they confirmed the priorities for training (for the next five years) will be surface and underground mining, mineral processing, safety, diamond drilling and job readiness,” Jones said.

The proportion of highly-trained younger workers in the mines is growing.

“We’ve noticed a change in our client base,” Jones said. “They’re younger and better-educated and choosing mining as a career (versus taking what job is available). Some of the folks we’ve trained are actually driving (the equipment) from up above, they’re not in the equipment at all.”

Since its 2003 inception, the MTS has worked with more than 3,300 people, provided supports for 2,400 and facilitated employment for 1,100 people, which represents five per cent of the NWT’s entire workforce.

Aurora College provides the training on MTS’ behalf. Duane MacDonald, acting chair of the School of Trades at Thebacha campus in Fort Smith, said the school benefits from a strong relationship with MTS that goes beyond the society simply sending them students.

“I want to stress the fact we are partners and work very closely with each other,” he said. “Without the college, it would be very difficult for them to get what they need… but MTS has done a lot to benefit the college, as well.”

Students sent through MTS are there to study a particular subject, but they obtain peripheral skills that help in life while they train at Aurora, including computer skills, first aid and resume writing, for example. Thompson said it makes for a more well-rounded graduate.

“I’m really generalizing, but in some of them it’s about learning to work with people, others are still sort of technical, like computer skills,” he said. “That isn’t necessarily mining, it’s not helping you drive that truck, but when you’re done driving the truck and have to do the report, the computer skills make you a stronger employee and make you more valuable.”