Is this “the end?” YK rock writer stood up in Edmonton 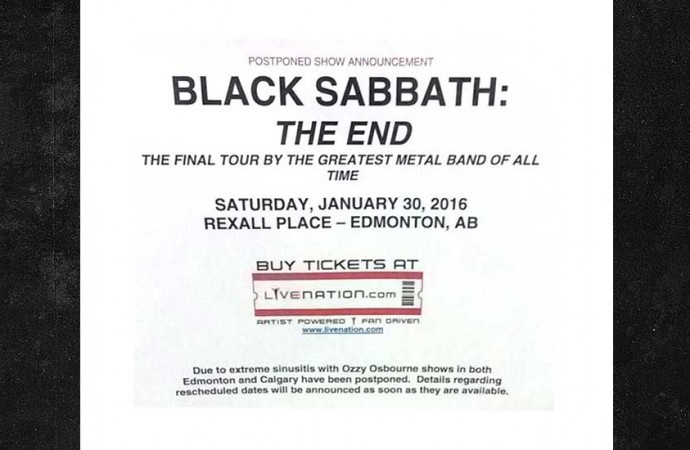 After more than 1,000 kilometres in the air and on the road, Jack Antonio was greeted with this sign at Rexall Place in Edmonton.Jack Antonio

I’m sitting at Rexall Place in my rental car while it’s running so that I can charge my phone. I know, I know, It’s not environmentally conscious.

Technically back home in Yellowknife I am not even sure it’s legal. But, it’s 6 p.m. and they aren’t really letting people into the building yet. And besides, it’s kind of weird to get into a concert venue and immediately dart for an outlet to plug in and charge up a device (although I am very certain that stranger things have happened at concerts). I’ve already had a chance to reflect on what has already transpired just a mere hour prior. Because I am on very good terms with their Canadian publicist, I was able to procure a face-to-face interview with guitar player Scott Holiday of Rival Sons.

Who are Rival Sons? That’s the most common question I encounter when I start name dropping this band to many of my non-audiophile friends. But I can assure you that in 2014 this California based hard rock outfit had the number one rock song in Canada for about six weeks with their track “Open My Eyes.” Sonically, the band has a stripped down hodge-podge of retro, Led Zeppelin-esque blues rock, mixed in with perhaps the thumping, low fi production of a garage rock band like The White Stripes. The choruses are hooky and the riffs are just edgy enough to land their tracks on mainstream radio and even some heavier “classic rock” orientated stations. In terms of creative output, Rival Sons most recent record “Great Western Valkyrie” was heavily praised by the rock music intelligentsia most likely due to the fact that they really know how to straddle the line enough to satisfy the casual listener and the pretentious listener alike. On top of this, their energetic stage shows are also creating a heavy buzz.

So, when they were “hand picked” by Ozzy Osbourne and manager/wife Sharon to tour as the opening act for legendary, monolithic, sludge/doom metal masters Black Sabbath it could potentially be the icing on the cake. If they are not a household name right now, it’s possibly only a matter of time before they are. This world tour with Sabbath is a BIG DEAL. It’s literally called “The End” and is meant to be Black Sabbath’s last hurrah. The guys are getting old – like grandfather old. They are finally slowing down which is amazing when you consider they have been at it for almost 50 years.

Upon learning of my interview with Scott, my mind is immediately set at ease. I was originally supposed to chat with the band’s vocalist, Jay Buchanan. Believe it or not, I get pretty nervous before every interview I face, especially if it’s on unfamiliar turf or if it’s with someone I have never chatted with before. In this instance, Scott and I had actually chatted in the fall of 2014 over the phone and I remember that the two of us had a great rapport. Once I arrive, Scott leads me to the back of the Rival Sons tour bus and I set up shop. He seems in good spirits, which also bodes well for our chat.

When I ask him how Rival Sons managed to score the slot on such a prestigious tour he launches into a detailed account of how the band’s latest release was nominated for an album of the year award by Classic Rock Magazine, so they were invited to play a two-song set during the awards show itself. Given the level of legendary acts in the room for the same gala event it enabled the band to essentially stage a de facto showcase in front of all the right people.

“It went good. It went really good,” muses the curly mustached, plaid-laden Holiday. “The audience was really just the upper crust of classic rock. So even just to go is super fun. They’re our heroes. Brian May. Ozzy. Glen Hughes and the list goes on and on. Oh my God! It’s like a dream.”

Scott’s enthusiasm is now reaching a fever pitch. He continues, “We got a standing ovation in this room. It was amazing, y’know?”

It turns out that Ozzy and Sharon are big fans of the band. Apparently, Sharon just proposed that Rival Sons join “The End” tour as the opening act “on the spot” which really surprised the band – I get the impression that that is virtually unheard of in the industry.

And in terms of the level of respect for Sabbath the feeling from Rival Sons is obviously mutual. “(Lead guitar player) Tony (Iommi) was a huge influence on me as a kid.” gushes Scott. “And Sabbath in general. Especially the early records were massive for me. I think ‘Electric Funeral’ might have been the first rock tune I ever learned.”

So with all this time with the the lords of doom you’d think there’d be some mentorship, right? Is Sabbath taking Rival Sons under their wing like they did with a young and hungry Van Halen back in 1979 on their ill-fated “Never Say Die” tour? So far it doesn’t seem to be the case, which seems to be okay with Scott.

“These dudes are pretty long in the tooth,” Holiday said. “I had a great hangout with Tony and we got to shoot the (breeze) and talk gear and talk mutual friends and he’s amazing. But so far these cats are pretty on their own deal which is totally, totally OK. It’s a big circus, man. It’s a big show for them too. So I think they’re kind of focussing their chi instead of just hanging loose.”

In terms of Rival Sons, though, it’s not just the tour that they are moving forward with. “(Our) new record is officially done and mastered and turned in. The artwork is all done so I think we’re expecting a May release. I’m allowed to say that.”

I wrap up my interview with Scott by getting him to sign a few CDs for me and pose outside the tour bus for a selfie. At this point I am pretty pumped for the show. Not just Sabbath, but also Rival Sons. I have a photo pass for their show and Scott promised to make it worth my while so I am starting to get anxious about using the camera as it’s usually my wife taking the pictures and she couldn’t come on this trip. This brings me back to the present. I need to try out the camera one more time so that I am confident enough to operate it in the dark during a loud rock ‘n’ roll show. I shut off my rental car and pop the trunk. It’s right about then that some guy a few cars over mutters something completely unintelligible to me out his truck window – a smoke dangling dangerously close to falling out of his mouth. I break my anxiety riddled concentration to zero in on what he has to say.

“Yeah. They just announced it on the radio.”

“Seriously? I came here all the way from the Northwest Territories,” I complain. “This can’t be true! I have V.I.P. tickets. I spent a lot of hard-earned dime. I just interviewed Scott of Rival Sons and I was going to be in their photo pit…” My voice trails off.

“You from Yellowknife? I got a few buddies that I was meeting at the show from there,” he responds. “And I’m from Tuk.”

At this point, in spite of the heartbreaking reality of the situation at hand, my speech instantly becomes more slurred and lazy as I switch into what I like to call “northern drawl.” He and I not only share the commonality of the universal brotherhood of heavy metal but we also both come from Canada’s North so we have a brief but cordial conversation. In spite of how nice this guy is, though, I cut things short. I have to see for myself about what is going on with this show and the only way I’ll know for sure is if I check at the box office.

As I get closer I feel like a fish swimming up stream. There’s many people heading in the opposite direction – not a good sign. As I arrive at the front entrance, venue employees are in the process of securing and locking the doors as they place up the cancellation notices. I see a young fella in his early 20’s approach, read the notice and instantly burst into tears while his girlfriend consoles him and tells him to “quit acting like a baby.” Meanwhile the 50-somethings are begging to be able to be let in just so they can “at least buy a t-shirt.” Their pleas fall on deaf ears.

Personally, I am in shock. I feel very helpless and equal parts disappointed. It doesn’t seem real. I have been waiting for this show not just since it was announced in the fall of 2015 but literally all my life. I first became a fan of Black Sabbath in 1985 – 30 years ago. This cancellation sucks. It’s total crap. I understand why… Ozzy has a case of extreme sinusitis and I can well imagine “singing” with this affliction can’t be all that pleasant. But, being from Canada’s North I don’t know if I’ll be able to make it back for the rescheduled show. Flying is expensive. Renting a car is expensive. Meals are expensive as are the inevitable pieces of special tour swag. And, relying on your friend’s couch to crash on is something that should only be used sparingly (Thanks Mike!). It’s a delicate balance just getting here to this point.

I head back to the car in a completely dejected state. Retail therapy is in order so I make the decision to meander back to the West Edmonton Mall but when I get there my heart is just not in it. The sun has gone down in the City of Champions now and I feel like I have played her game and lost. In the distance of my subconscious a bell tolls. A figure in black points at me and I realize it’s my own downtrodden reflection. Is this the end, my friends? Perhaps … But there’s still more to this story to share.

Read the continuation of Jack Antonio’s adventures in Edmonton next week.