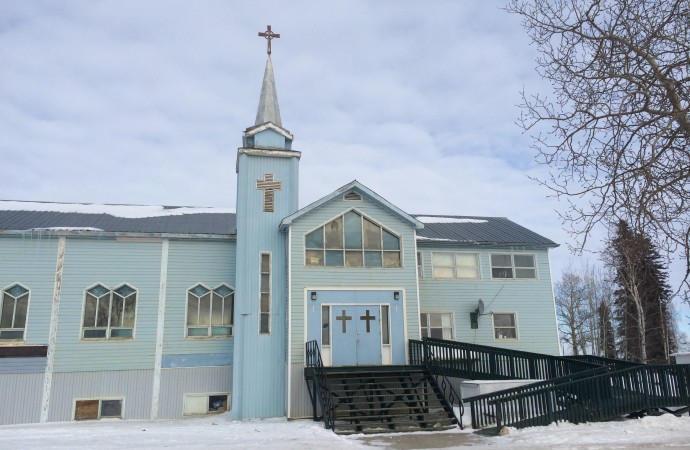 The Tulita Church is sinking as permafrost melts.Courtesy of Bishop Mark Hagemoen.

Catholics across Canada will have to pick up the bill after six dioceses were reclassified by the Vatican.

The Roman Catholic Diocese of Mackenzie-Fort Smith, which serves 32 communities in the Northwest Territories, and five others including Keewatin-Le Pas, Churchill-Hudson Bay, Moosonee, Grouard-McLennan and Whitehorse now fall under normal, or “common law” status.

The change means they are no longer “missionary dioceses,” referred to formally as parts of the Congregation of the Evangelization of Peoples, and will lose financial support from the Vatican.

Bishop Mark Hagemoen told the Journal that means the rest of the dioceses in Canada will chip in to make up the difference, which is about $50,000 per year.

“It’s a drop in the bucket when you talk about serving 32 communities,” he said via phone from Fort Simpson, where he was meeting with locals to develop a plan to get the church there rebuilt. The 90 year-old Sacred Heart Church was deemed unsafe and demolished in fall 2013.

The Mackenzie-Fort Smith Diocese receives financial support from outside groups, including Catholic Mission In Canada, which was founded in 1908 as the Catholic Church Extension Society of Canada to help dioceses in areas with limited means. Three years earlier, the Catholic Church in Canada and the United States had gone through a reclassification of their own, declared “independent” and similarly cut off from Vatican funding

For years the society took money raised in the east and built small parishes across the prairies and in the mountains to serve the thousands of settlers in Western Canada. Later, it encouraged priests in the Atlantic provinces to go west and serve in remote and priestless parishes and as the demand for missionaries grew, began to train seminarians.

More than a century later, the NWT remains an area of limited means.

“Two of our (churches) are capable of supporting themselves,” he said. “By comparison, before I was made a bishop I came from the Archdiocese of Vancouver, where there are 82 parishes and they’re all self-supporting. The economic situation in the NWT is not getting any better, it’s getting worse right now, so things are getting a little leaner for us.”

Many churches, now relics like the former church in Fort Simpson, or the Tulita church, which is sinking due to melting permafrost, are falling into disrepair as maintenance is deferred year after year. With the high cost of demolition in the NWT, each is a financial time bomb for the diocese.

“If we don’t attend to those in the next couple of years, some will be beyond the point of no return,” Hagemoen said. “That’s creating another challenge (because) in many cases you would have been better off if you maintained it properly. When you demolish a building, all of the material has to leave the NWT, so it becomes very costly.”

The Fort Simpson project is a new endeavour because the diocese has never had to rebuild a church itself. The dynamic between each church and its community is changing, too.

“In the old days the oblates (Oblates of Mary Immaculate, a religious order of priests and brothers who built and managed the churches) did everything: they designed it, they built it and they maintained it,” the bishop said. “Now we’re doing what everybody else does: come up with a plan and fundraise, try to tender it and come up with the most cost-effective way to build it. Then there are the pastoral needs, which are huge, including continuing to support the family and youth stuff, and elders. We have a number of calls to action that address healing support. So we have to make a pastoral decision and come up with the resources to try to deal with it.”

Still, Hagemoen said he understands the Vatican sees a greater need for its support in the developing world, where dioceses across India, Africa and southeast Asia remain under missionary status.