On the first Pink Shirt Day since a student at JBT Elementary School in Fort Smith was injured in a bullying incident in October, NWT Commissioner George Tuccaro brought the healing power of music.

Principal Cora America told the Journal before our press deadline Feb. 22 that Tuccaro planned to play two anti-bullying songs at a morning assembly at the school Feb. 23.

“In the fall our school had issues with some bullying and ever since we have been trying very hard to resolve and address,” America said. “We first connected about him visiting before Christmas and confirmed last month.”

Erasebullying.ca describes bullying as “any pattern of unwelcome or aggressive behaviour, often with the goal of making others uncomfortable, scared or hurt.” It is almost always used as a way of having control or power over their target and it is often based on another person’s appearance, culture, race, religion, ethnicity, sexual orientation or gender identity. 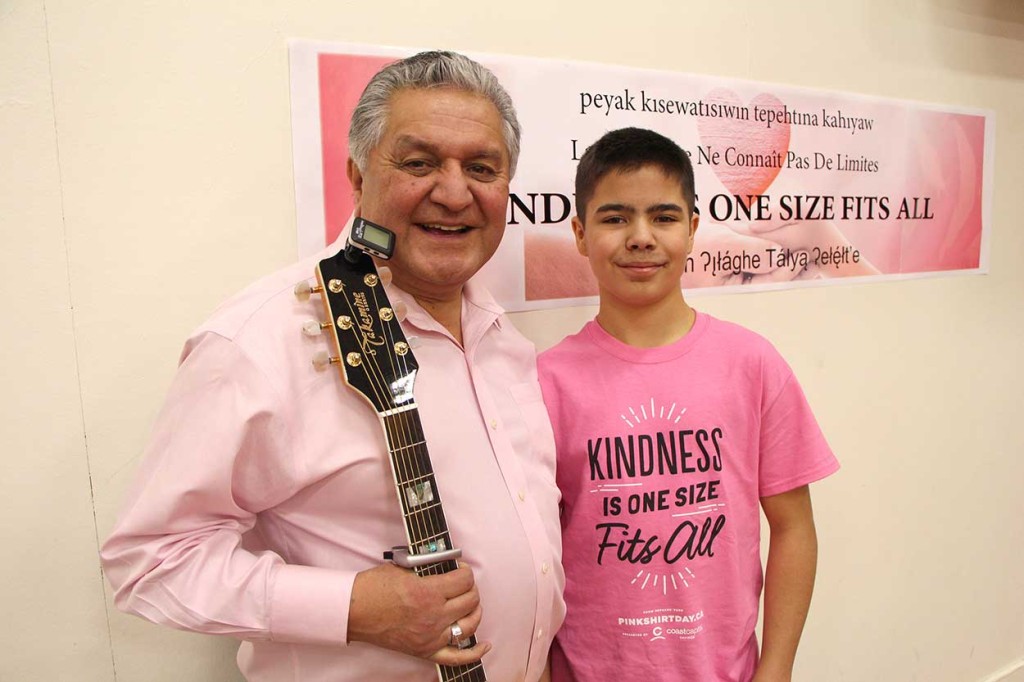 “We want the kids to take responsibility for their actions,” she said. “It’s about how they conduct themselves in the school, out in the community and when they visit other places on field or sports trips.”

The anti-bullying assembly will also feature a presentation by the JBT student leadership team, a performance about kindness by Janet Bell’s Grade 3 class and an original rap by Grade 9 PWK High School student Jomei Newkirk. 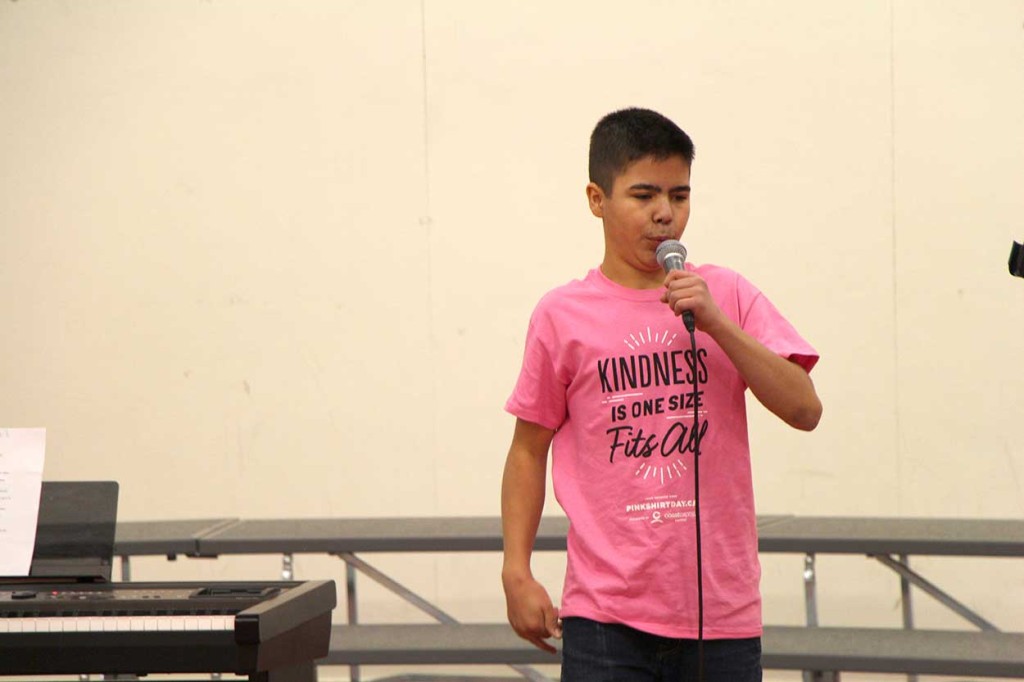 Fort Smith elder Jane Dragon was a counsellor at PWK High School for 10 years. She said bullying was not an issue when she was growing up because parents were more involved.

“When I was a kid, we were never bullied,” she said. “Parents dealt with it. I remember one time my cousin told me to bring his books home after school. I took them home, because he used to be bad,” she laughed. “When I came home, I told my gramma why I was late and at suppertime, grandpa said to me: ‘never, never carry Joe’s books home. Let him do it.’ He must have talked to my uncle because Joe never asked me to take his books home again! Things like that used to happen and you dealt with it right away.”

She said with parents more in touch with their kids and one another, things “never went out of hand like it does today.”

“I feel sorry for the teenagers today because they have to deal with so much,” she said. “In Fort Smith, we weren’t 2,600 at that time, and everybody knew everybody. It didn’t matter what nationality you were, you all grew up together. There was no such thing. That’s how you were raised.” 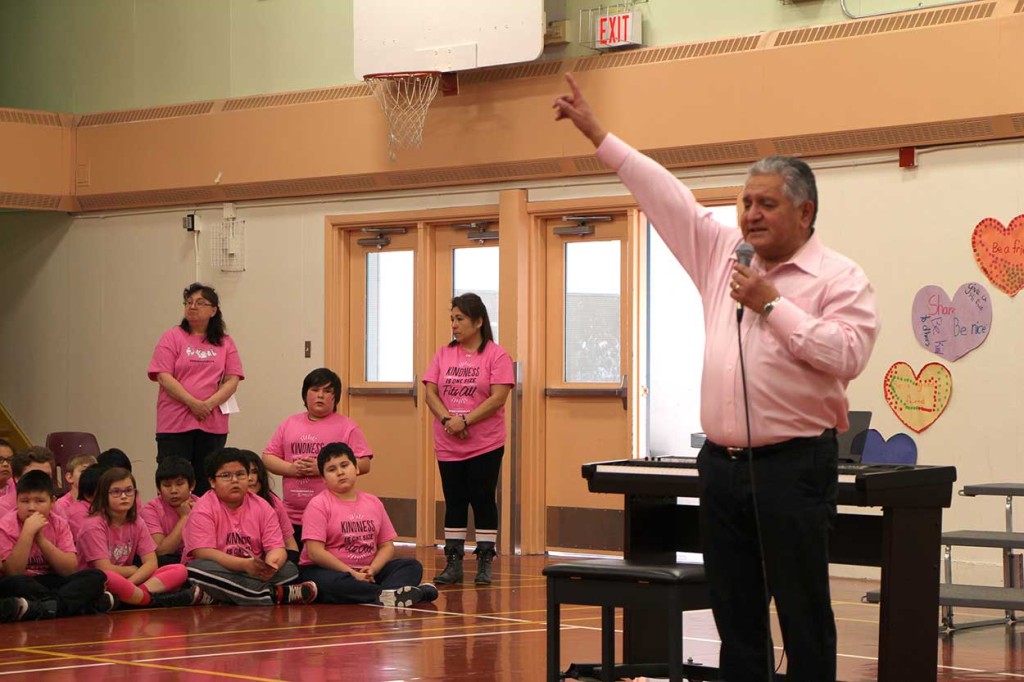 NWT Commissioner George Tuccaro shared a personal story of losing a young 13-year-old cousin to suicide brought on by bullying with students at JBT in Fort Smith on Feb. 23.

She recalled Sister Sarrazin, a teacher and a nun who ran a de-facto after school program for the teenagers at the time.

“We didn’t have roads at that time, we didn’t have TV, we used to hang out with the Crusaders, church stuff,” Dragon said. “We had a nun that used to teach high school and we would go over there in the evening from seven to nine. She used to come in and help us with whatever every day of the week.”

Dragon wondered aloud whether a member of the Fort Smith Senior Citizens’ Society would be willing to open up their room at the front of the town’s recreation centre and play a similar role for teens today. She said during her time as a counsellor, she treated the children as if they were her own. 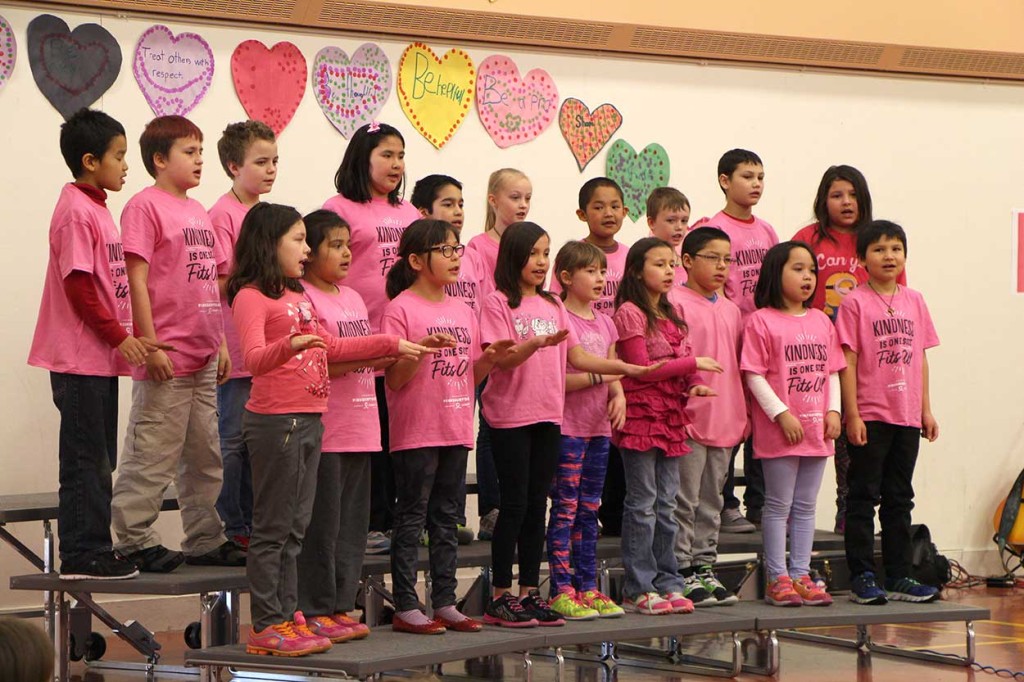 Janet Bell’s Grade 3 class sang a song about treating others with love and respect during a Pink Shirt Day assembly on Feb. 23.

“(Children) should always turn to somebody before it gets too much,” she said. “I don’t know, I haven’t been in the school for a while. They always turned to me and I talked to the other kid … but I think now it’s different, like I see it different. I find even being with the FOXYs they have lots to deal with, and they grow up too fast. I mean, we didn’t grow up too fast.” 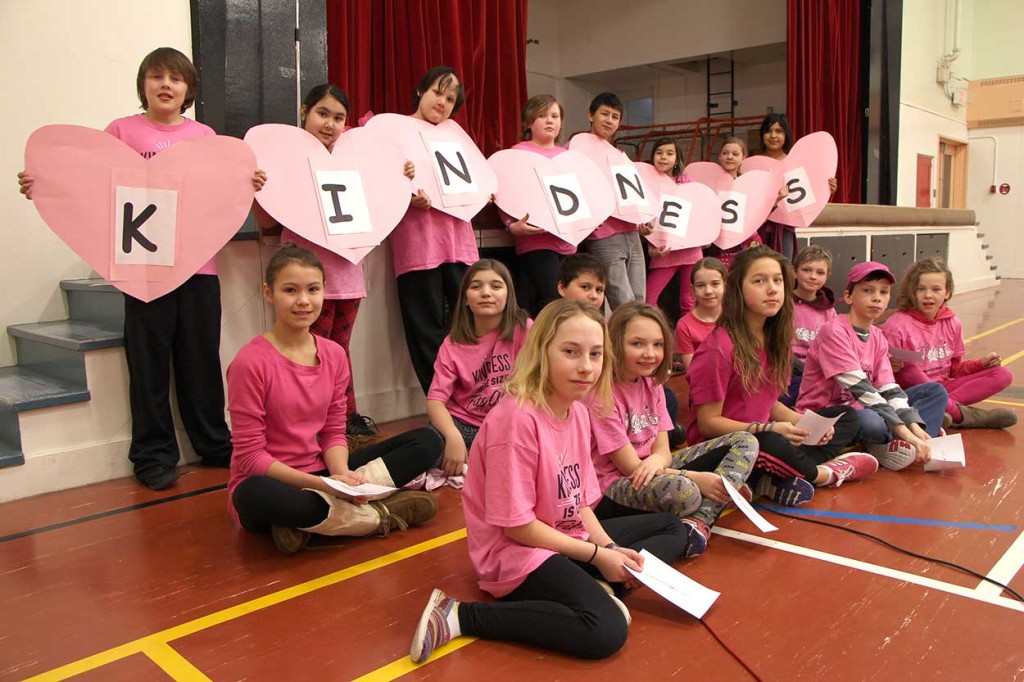