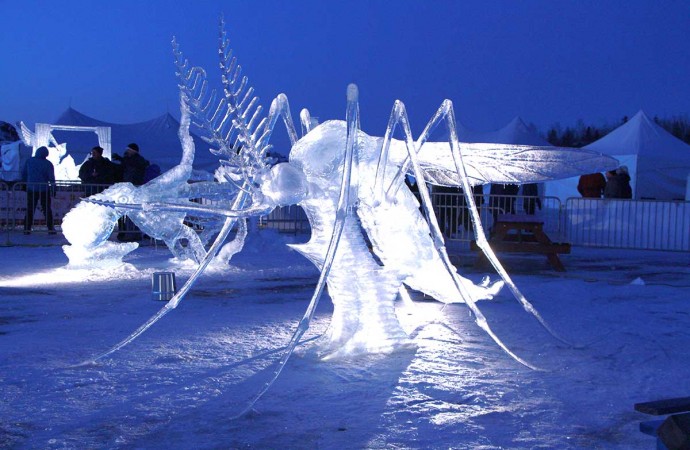 There will likely be ice sculptors at this year’s Long John Jamboree, though they may not be of the international-level-of-competition variety.

Organizers of Yellowknife’s annual early spring carnival were disappointed upon receiving word that De Beers Canada would not be sponsoring the Inspired Ice NWT Ice Carving Championship, a highlight of the festival over the last four years that drew master chiselers from all over the world.

“We are optimistic that we can have some sort of ice carving activity,” said Adrian Bell, an organizer of the Jamboree. “Right now what we’re looking at is potentially a couple of demonstration carvings that may provide training opportunities for local carvers, but it wouldn’t be in a competition format. The competition is just a bigger undertaking and is much more expensive.”
The $30,000 hole left by De Beers would usually cover the costs of transporting artists into the city, as well as operational fees and prizes for competition winners.

“The difficulty for the Jamboree is that the announcement came so late, it doesn’t give us enough time to find replacement sponsors at that level,” Bell said. “That’s a little frustrating for us but we already have seen smaller businesses in the community coming out of the woodwork and expressing an interest and helping out as much as they can.”

In addition to individual sponsors forking out their own cash through a GoFundMe page set up by Jamboree volunteers, local businesses including Northland Utilities, Roy’s Audio Video, Breakaway Fitness Centre and Thornton’s Wine and Tapas Room have come forward to help fund the festival.

Dominion Diamond Corporation also announced this week that it would sponsor the Canadian Championship Dog Derby, an annual race that takes place alongside the Jamboree.

“Yellowknifers are very generous and we know that they understand the situation, especially given how close the event is and they seem to be stepping up,” Bell said.

De Beers spokesperson Tom Ormsby said he hoped Yellowknifers would also be forgiving of the company’s “hard” decision in light of the recent closure of Snap Lake Mine, causing more than 400 employees to be laid off.

The company is currently in a state of restructuring, Ormsby continued, causing it to “look at everything that has to be reviewed, not just the Northwest Territories but across the country.

“Right now we’ve got three mine site locations, one that is still operating in Ontario, we have the Snap Lake mine that is now going through extensive work to put it into care and maintenance, so that stopped working, and we have another site that is under construction with our Gahcho Kue contract, so that’s not generating any revenue yet,” he said. “Our resources across the country are not what they were in the past.”

Despite the setback, Bell remains optimistic about this year’s Long John Jamboree, for which last-minute planning is underway.

“We’re introducing some new things and we’re going to do our best to make sure that this is a great Jamboree for kids, visitors and competitors,” he said. “I expect we will have a great event again in 2016, and with any luck, we will find new sponsors in 2017 and the ice carving competition will come back as it was in 2015.”