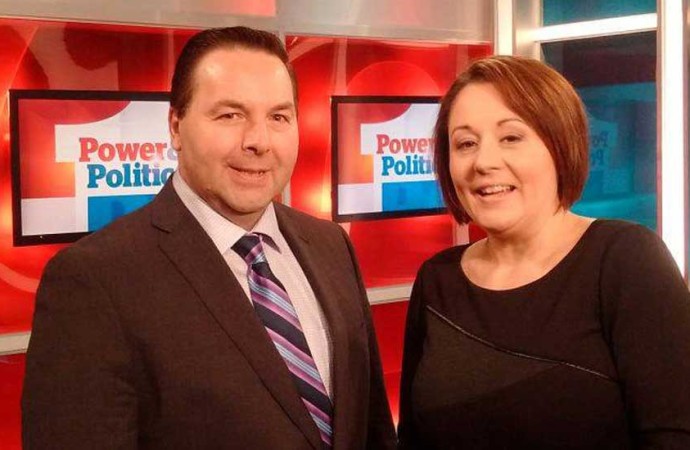 Hay River South MLA and cabinet minister Wally Schumann joined Premier Bob McLeod on a trip to Ottawa last week. He took part in an audience with the prime minister and looked on as McLeod was interviewed by Rosemary Barton on CBC’s Power & Politics.Photo courtesy of Wally Schumann

Wally Schumann knows how to build on an opportunity.

From an early career in auto body repairs to building a business from the ground up to entering cabinet as a rookie MLA, Schumann has come a long way since moving to Hay River from Fort Smith more than three decades ago.

“Anytime it comes up in conversation where I’m from, I always tell them it’s probably one of the best places to grow up,” Schumann said of Smith. “We have the best snowmobiling around, it’s probably the most beautiful, scenic place in the whole Northwest Territories.”

At 22 years old, opportunity knocked, drawing him west to the South Slave’s commercial and business hub. He worked on cars for 10 years and in 1998 founded Poison Graphics, which began life as a repair shop for vehicles but quickly expanded and morphed into what is now the largest sign-builder in the Northwest Territories.

When he ran for MLA in Hay River South last fall, Schumann said it was the “endless possibilities” that kept him and his wife Lori in the community, and that he has dedicated part of his career to growing the town with sustainable local economic development. He was a director of the Hay River Chamber of Commerce, a member of the NWT Chamber of Mines Aboriginal Participation Committee and a director for the NWT Manufacturer’s Association, connections that undoubtedly helped him garner 47 per cent of the popular vote and unseat five-term veteran MLA Jane Groenewegen, who mustered 35 per cent of the votes cast.

Schumann said working in auto body repairs taught him to listen and work with customers to meet their needs, values he carried forward to other leadership roles, including two years as the vice-president and two more as president of the Hay River Métis Government Council.

That experience, in turn, serves Schumann as he prepares to take his seat in the NWT legislature for the first official session of the 18th Assembly as minister responsible for Transportation as well as Environment and Natural Resources on Feb. 18.

“A lot of people don’t understand the in-depth stuff that goes on at the Hay River or NWT Métis Nation level,” Schumann told the Journal. “You have MOUs (memorandums of understanding) with the GNWT so you’re meeting with them, you’re negotiating land and resource agreements with the federal government, so you meet with federal officials. Then I was fortunate enough to be the president, where you start to deal with a lot of local issues, so it was like being a mini-MLA. Human resources issues, health issues, business opportunities, that sort of thing. It’s pretty much like an apprenticeship to come here.”

A prized accomplishment was hammering out a Métis community wellness contribution funding agreement with the GNWT. Now he is on the other side and, more than that, has more to worry about than Hay River as one of six ministers on Premier Bob McLeod’s executive committee. That said, Hay River is “well represented” in the legislature with one regular MLA in Hay River North’s R.J. Simpson and Schumann in cabinet.

“We have good people here helping us move along but there’s lots to take in for sure, whether you’re an ordinary MLA or a minister, especially with 11 new members,” Schumann said. “I think coming into this when you’re running is a little different than when you get here, especially when you get on cabinet, that’s a whole different focus. You’re here to look after all the residents of the NWT now. There are six cabinet members and three of us are brand new to the process and brand new to government. Two of us went from private business right to cabinet. It’s a different experience, for sure. It’s been an interesting ride.”

Schumann would not discuss what he would see as priorities as Transport or Environment minister. Ministerial mandates are to be dealt with early on in the legislative session that begins Feb. 18.

“In consensus government we all have to work together, it doesn’t matter where you sit in the room,” he said. “The 18th Assembly is working hard to move things along for the people of the NWT and trying to make the best decisions we can that will affect everybody.”