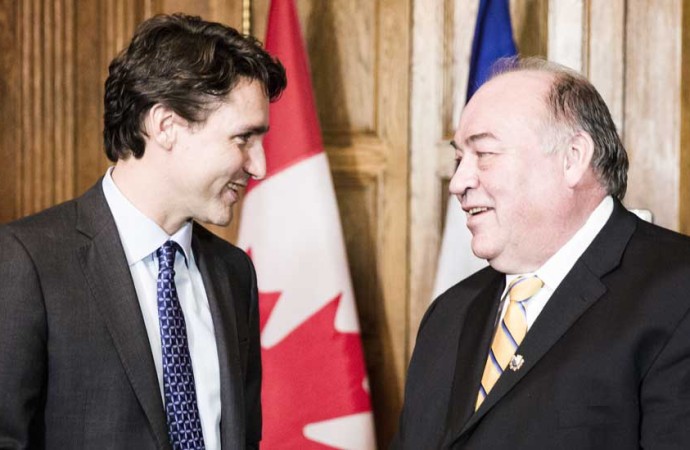 Prime Minister Justin Trudeau hosted NWT Premier Bob McLeod in Ottawa on Feb. 11. The leaders had not met since their respective elections in the fall, and discussed, among other things, a promised increase to the tax credit for Northern residents.Photo courtesy of PMO / Flickr.

The letter Justin Trudeau wrote Premier Bob McLeod during the federal election last fall promising millions for infrastructure and a boost to the Northern residents’ tax deduction remains a popular document at the GNWT.

“I told him we read it everyday, almost like a Bible,” Premier Bob McLeod said last Friday.

McLeod’s bilateral meeting with Trudeau in Ottawa on Feb. 11 was their first as government leaders; he was unable to attend a first ministers’ meeting on climate change ahead of the COP21 summit in Paris since he was in the midst of his own re-election bid.

With the much-anticipated federal budget expected to be made public as early as next month, they discussed a number of subjects including road, housing and green infrastructure, the “glitch” that threatens to reduce the NWT’s transfer payment from the federal government by $34 million, economic development and climate change, according to the premier.

McLeod was eager to talk about what federal support there would be for power generation projects, specifically hydroelectric dams – also in that pre-election letter was a promise to “provide new, dedicated funding to provinces, territories and municipalities for public transit, social and green infrastructure.”

He said the NWT had hydroelectric capacity “on par with James Bay,” noting where exactly the new projects would go has not been decided.

“There were some studies done in the past, and obviously the most immediate interest is in the Talston,” he said. “When we looked at it, the cost was a lot more than we expected so if the federal government has a program where they are prepared to invest money, we would be interested in checking it out.”

He said the GNWT would also pursue federal cash for the cost of building transmission infrastructure as well.

“That’s the only way it would go ahead, if the federal government saw fit to invest in it,” he said. “We wanted to make sure we got our fair share (of funding). We need to reduce our use of fossil fuels and we want to use more renewable forms of energy and become more energy efficient.”

McLeod made sure he mentioned “strategic” infrastructure, major projects he hopes will go ahead thanks to Trudeau’s promise to massively boost federal spending. In his letter, Trudeau said the Liberal plan is to nearly double federal infrastructure investment from $65 billion to $125 billion over the next 10 years and doubling that spending in each of the next two fiscal years.

“I brought up that we had put in an application for the Mackenzie Valley Highway over a year ago and we wanted to extend the all-weather road into the Slave Geologic Province and build an all-weather road to Whati,” McLeod said. “We talked about the fact that we’re a large territory but we only have 44,000 people so our preference when it comes to allocating infrastructure money, that it (not be done) on a per-capita basis.”

They agreed there is still $185 million in federal funding earmarked for capital projects in the NWT that has not been spent yet.

“(Trudeau) said they were working very hard to roll out their infrastructure program,” McLeod said. “We said we wanted to confirm NWT had put in a list of projects and we’re waiting for them to be approved. He said the budget is on the way.”

McLeod informed Trudeau the GNWT is acutely interested in the changes made to the assessment process for pipeline projects.

“He mentioned an agreement to do a review after five years,” McLeod said. “He thought it might be fast-tracked if a review was being undertaken. I indicated (Indigenous and Northern Affairs) Minister (Carolyn) Bennett appeared open to it. We’re following up with a letter; we are very familiar with the issue.”

The leaders also discussed the high cost of living in the NWT, which Trudeau has pledged to address with a long-awaited increase to the Northern Residents’ Tax Deduction. McLeod said the prime minister reiterated the intent to increase the deduction.

“We’re the only jurisdiction for past five years or so whose population is declining,” McLeod said. “When we check into it, it’s largely because of the high cost of living. Housing is a big issue (also) and is becoming a bigger issue as the need continues to grow. I mentioned that housing infrastructure is different in the North than the south and he agreed.”

The prime minister is “very aware” of the issue with the territory’s transfer payment, which came as a shock to bureaucrats at all three northern territories when it was discovered before Christmas. A change to the way the transfer is calculated based on Statistics Canada data resulted in the NWT’s payment being reduced by $34 million to $1.256 billion, or $28,352 per capita.

“I said we appreciate the fact Finance Minister (Bill) Morneau has committed to take action very quickly,” McLeod said. “The prime minister is very aware of the issue and re-committed that the federal government was working to resolve it very soon. It makes a difficult situation more difficult.”

Almost three months after the election took place, MLAs will begin their first legislative session together on Feb. 18 but McLeod expects the GNWT’s challenging fiscal forecast will not be dealt with right away.

“We’re still in the very early stages,” he said. “We have to get approval of our mandate and we have to deal with the interim (budget) and it probably won’t be until the next sitting, I would imagine, when we would start to deal with the fiscal situation. The federal finance minister indicated his budget will be out in March, so it would tie in nicely.”