They could be the most interesting men and women in Nunavut.

From some of their earliest work spoofing an Old Spice ad campaign and the Dos Equis beer “most interesting man in the world,” the five-person team producing Qanurli?, a skit comedy show posted online and aired on APTN, has been getting more and bigger laughs since they launched with the Inuit Broadcasting Corporation in 2010.

The team of  Stacey Aglok, Vinnie Karetak, Malaya Chapman, Joshua Qaumariaq and Thomas Anguti Johnston, work in an all-hands-on-deck system, with everyone sharing duties in acting, producing, filming, lighting and writing. They just finished filming season five and are in the process of developing season six. Qanurli translates to “what now?”

One year ago this month they moved out from under the wing of the IBC and formed a private company, which opened the door to more federal filmmaking funding, which in turn gave them more capacity to train. 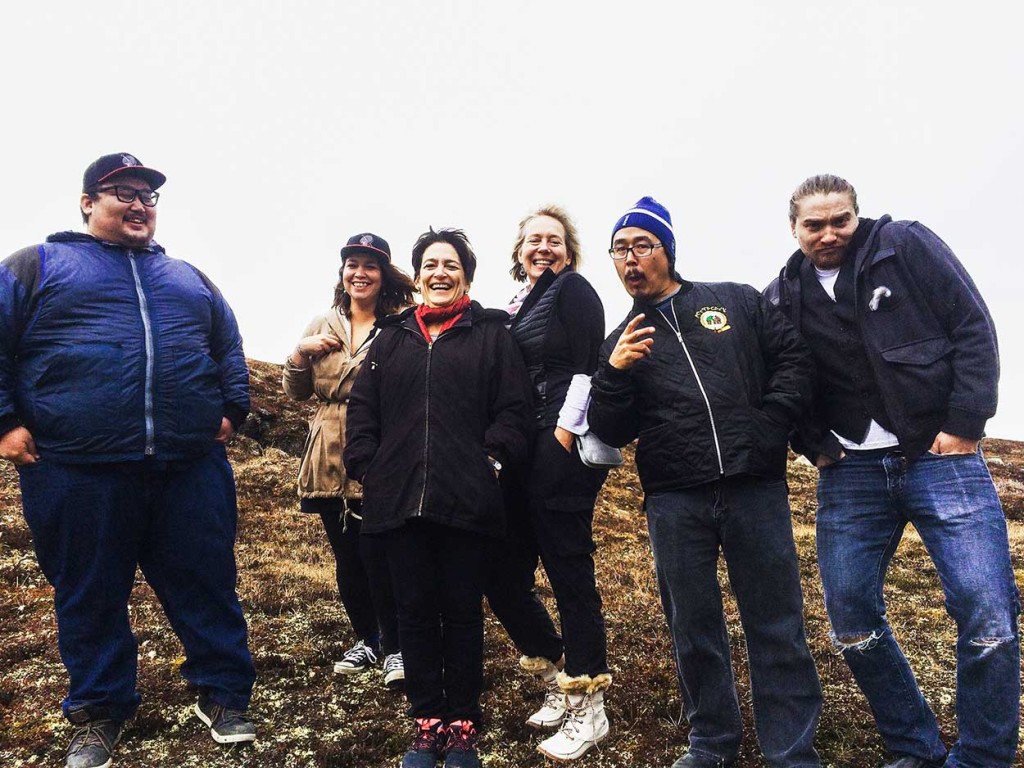 “There was some of us that acted, some of us that had production companies, some of us had written but not all of us had ever written or acted or produced a TV show before,” Karetak said. “When we got together we were unsure of what to do, we would follow the lead of the one producer from IBC and even then she was trying to work with younger folks who had never done this before. She wasn’t really into teaching that much.”

The three members of the team who spoke to the Journal via telephone from Iqaluit agree the quality of the show has steadily increased, and after five years, they are still the only comedy show produced anywhere in Canada’s North. More than a niche, that content gap provided Qanurli? with miles of leeway for material and a hungry younger audience that did not see themselves represented anywhere else.

“Inuit content that was coming out was a lot of talking heads and pan shots, and old footage for general discussion,” Karetak said. “That didn’t catch the attention of the younger folks. This TV show has really brought a lot of humour out, and a lot of excitement.”

Added Aglok: “Up here, dealing with APTN especially, there is a lot of focus on documentary but not so much on drama or comedy, actually using scripts and actors. I think that’s pretty special: we’re not only doing it in Inuktitut, our own language, we’re doing it in a format that hasn’t been done in the North.”

Qanurli? is the group’s focus but they have ambitions to add capacity and take on other projects.

“We’re excited too about a feature film, which we want to do someday. A documentary we would also be interested in doing,” Aglok said. “The really good thing about TV is it’s continuous. It has a high possibility of year-round work and year-round training opportunities for different people, us included. There are so many possibilities in television for capacity-building (including) eventually having enough of us to have multiple projects going on at once. That’s definitely a goal of ours for sure.”

They also plan to expand the show’s scope beyond Nunavut to include all of Canada’s North and even other countries with Inuit populations. Judging by their Facebook traffic, the show’s fan base recently “exploded” in Greenland, for example.

“One of the big goals lately has been that in the past we have been very Nunavut-focused – made for Nunavimmiut by Nunavimmiut,” Aglok said. “But we’re growing and wanting to challenge ourselves more, and part of that is including Inuit and other Aboriginal groups from all over Canada, really. We’re doing a shoot in a couple of weeks in Nunavik, which is northern Quebec, and maybe someday we’ll be able to take the show to Northwest Territories and Greenland.”

If that plan pans out, the content should keep coming.

“Inuit humour is some of the funniest,” Chapman said. “It’s really dry humour. In Inuktitut (the show is) funny, but then you try to bring it into English and on the camera, like, it doesn’t quite translate. Yesterday we had a conversation about one Inuk word that could be translated three different ways – try to translate that to English. Inuktitut is way funnier than English.”