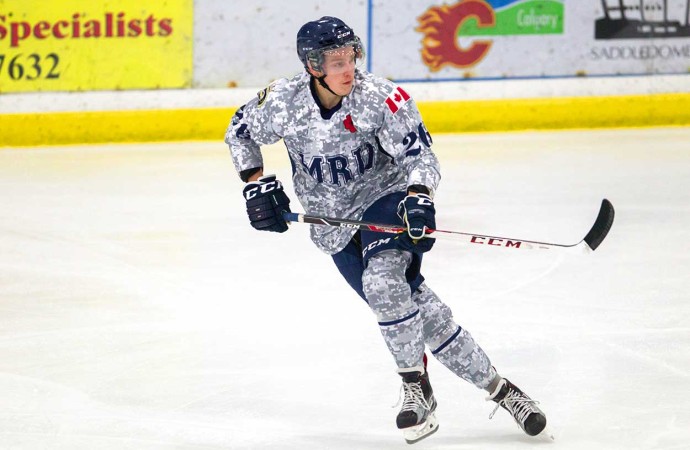 Fort Smith native Shaun MacPherson and the Mount Royal Cougars are setting themselves up for an epic battle they hope will redefine their history.

Over the weekend, the Cougars knocked off the University of British Columbia Thunderbirds 7-1 and 3-0 to capture their best-of-three quarterfinal matchup in two straight games.

This weekend the Cougars will face off against the University of Alberta Golden Bears for the first time ever in the playoffs. The semi-final series to be played in Edmonton goes Friday, Saturday and, if necessary, Sunday.

Last year, the team knocked off the Saskatchewan Huskies in the first round of the playoffs before losing to the University of Calgary in the second round.

The Cougars entered the playoffs on a high note. Their 17 wins, eight losses and three overtime losses was good enough to give the squad third place in the regular season.

The eight-team league also features the Universities of Lethbridge, Saskatchewan, Calgary, Manitoba, and Regina. Neither Lethbridge nor Regina made the playoffs.

“We wanted to get into the playoffs, that was our goal and we made it,” Cougars’ coach Bert Gilling said. “Look, we were even challenging for a bye into the last week of the season. Now we are very happy and proud of our guys now and relish the opportunity to go up against University of Alberta in the semifinals. We know it is going to be tough, but it is another milestone for our program.”

Unfortunately, Friday’s game against UBC did not go well for MacPherson. It was not known at press time what his status will be for the semi-final series against the Golden Bears this weekend.

“Shaun sustained a lower body injury in Friday’s game that I did not know about until Saturday morning,” Gilling said. “Right now, he is day-to-day.”

MacPherson said a big goal for the team would be to get to the final because that would guarantee them a spot in the University Cup (Mar. 17-20) in Halifax.

MacPherson finished the regular season with two assists in 25 games and an impressive +8 ranking putting him in seventh place among his 24 team mates on the roster. Even among top rookie scorers in the league, MacPherson’s plus-minus ratio would put him amongst the top six group when considering that statistic alone.

“That would be fantastic,” he said when talking about the possibility of heading east next month.

MacPherson signed with Mount Royal last spring after finishing his junior career as captain of the Kindersley Klippers of the Saskatchewan Junior Hockey League (SJHL). Last season, he had 10 goals and 26 assists in 52 games and was widely regarded as one of the best defencemen in the SJHL in 2014-15.

Gilling said MacPherson has continued to progress with his play and is seeing about 15 minutes of ice time per game.

“Some nights he has been getting a little more penalty kill time,” Gilling said. “He is in the regular rotation and there is a feeling for his future growth with the team.”