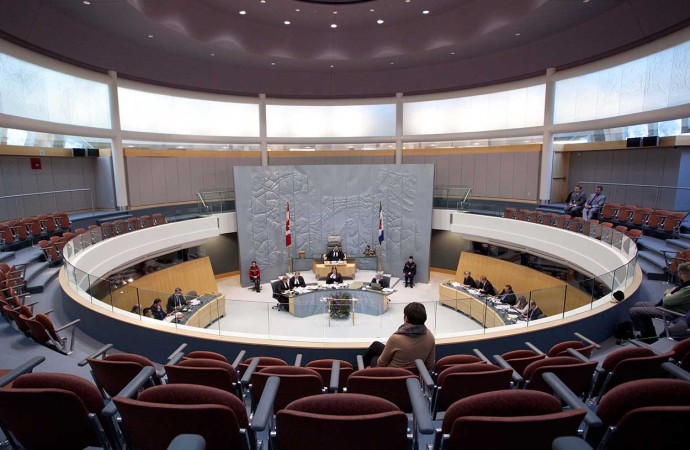 Members of cabinet and regular MLAs return to the legislature for the second session of the 18th Assembly on Feb. 18 as they prepare to deal with a looming budget shortfall that could put the territory in the red as early as 2018-19. Photo by Bill Braden

The stage has been set for a clash over how to fix the GNWT’s finances as the first legislative session of the 18th Assembly begins on Feb. 18.

Regular MLAs announced Feb. 15 that they are worried Premier Bob McLeod’s cabinet would implement austerity measures to close a budget deficit projected to balloon to $32 million by 2019-20.

“All we’re saying as regular MLAs is that the government has a certain budget and we want to make sure it is spent strategically to improve the economy, and doesn’t make things worse in the Northwest Territories,” Tu Nedhé-Wiilideh MLA Tom Beaulieu, chair of the Standing Committee on Priorities and Planning (SCOPP), said. The committee is made up of all regular MLAs and no cabinet ministers.

“Slow economic growth and weakening prices for natural resources means that the GNWT’s revenues are not expected to see much growth over the next five to ten years,” Minister McLeod said. “At the same time, government expenditures have been growing due to increased costs and rising expectations for programs and services. We need to act now while the problem is still manageable so we can ensure the future financial stability of the GNWT.”

The finance minister warned projected budget deficits, which could emerge as soon as 2018-19, would “erode the GNWT’s ability to sustain programs and services currently required by the people of the Northwest Territories and eliminate the funding needed under the Fiscal Responsibility Policy to invest in infrastructure, including participating in the (federal) Building Canada Plan.”

That policy requires the GNWT to generate operating surpluses to finance infrastructure investments, with at least 50 per cent of the funding for capital projects to come from operating surpluses and a no more than half to come from debt. Finance Minister McLeod said increased borrowing to fund capital projects or pay for unexpected expenditures, like recent record fire seasons and low water in the Snare Hydro System, will bring the GNWT closer to its federally imposed debt limit and make it impossible to absorb further unexpected costs.

McLeod said the GNWT will develop proposals and share them with MLAs for input prior to the preparation of business plans later this year.

Regular MLAs proposed the GNWT adopt fiscal planning priorities that would create new sources of government revenue and would invest immediately in the economy through targeted infrastructure projects and economic incentive programs. Beaulieu confirmed cabinet and SCOPP had met, but said members of the executive were not sharing everything with regular MLAs.
Beaulieu said the SCOPP supports responsible spending but is concerned austerity measures would undermine many of the 18th Assembly’s priorities.

Spending the money either way could be described as investing in supports for seniors, which is an agreed-upon priority for the 18th Assembly, but Beaulieu said home care would achieve the same goal at a fraction of the cost. He noted other jurisdictions including Ontario are moving in that direction as well.

“We’re not opposed to finding efficiencies at all,” Beaulieu told the Journal. “We’re just being cautious.”