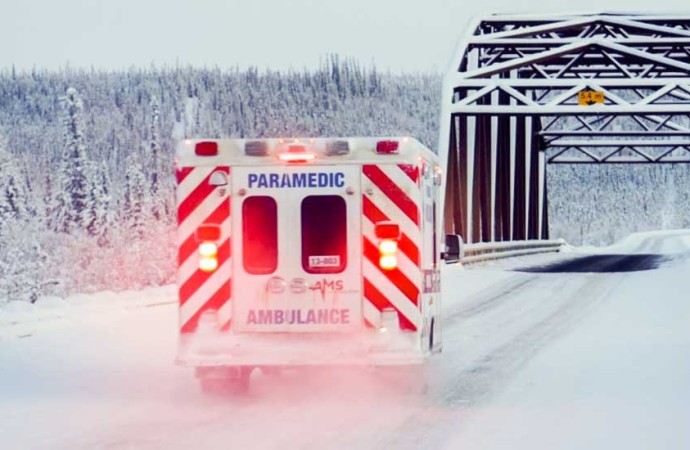 Advanced Medical Services, the new emergency medicine provider in Inuvik, drove the town’s two new ambulances up the Dempster Highway on Feb. 3, stopping to help motorists who had hit the ditch along the way. The company, which already provides air ambulance service across the NWT, intends to build a new base for its combined operations in the Arctic town and offer medical training to community members.Photo courtesy of Sean Ivens

An ominous sign warns travellers of the dangers of heading toward the Arctic Circle: “there are no emergency medical services on the Yukon portion of the Dempster Highway.”

On Feb. 3 that was not the case, as a pair of brand new ambulances made their way to Inuvik to enter service with the regional hub’s new ground emergency medicine provider, Yellowknife-based Advanced Medical Services (AMS).

The handful of drivers who they came across in the ditch that day were no doubt relieved to see what appeared to be two teams of paramedics happening upon them.

“One vehicle that was in the ditch was (driven by) a young girl, it had literally just happened,” recalled AMS president and CEO Sean Ivens, who led the mini-caravan with a team of three employees. “We pulled up and turned on the lights for safety since there was some traffic on the road. We ended up digging her out of the ditch and helping her on her way. One of my other drivers asked her name and it turns out she was his daughter’s best friend. Small world.”

About two weeks later, on Feb. 15, AMS, which provides air ambulance service for all of the NWT and western Nunavut, as well as emergency medical services to industrial operations nationwide, officially took over the contract to operate land ambulances in Inuvik for the Beaufort Delta Health and Social Services Authority (BDHSSA). The next day, the new ground crew and the existing air ambulance team worked on their first call together.

The primary unit is a two-wheel drive Crestline Coach built on a van chassis. It was the demonstration “flagship” unit the manufacturer used for promotional activities such as trade shows.

“We wanted our primary unit to be a typical city ambulance with all the comforts of a modern ambulance,” Ivens said. “The (F350) gives us the ability to operate in more rugged conditions or bad weather, so we can still respond and not be restricted as much.”

For the time being AMS is renting the old Driving Force facility for its ground operations, but Ivens has plans to build, within about 12 months, a new combined facility including the air operations and an apartment for the paramedics to stay in while they are on-shift.

“That allows us to respond within the community within 90 seconds; that is our goal,” Ivens said. “In Inuvik we always have three people on-shift on the air side. On the ground side, we have two people on-shift 24/7 with the ability to recall two more. In effect, we can operate two ambulances if absolutely necessary. We’ve hired five people and I’m happy to say they’re all local residents.”

They are all experienced and qualified emergency medical responders (the entry-level certification) and primary care paramedics. At least some of them were recruited from Blue Ice, which provided ambulance service in the town for about 20 years.

Blue Ice bid on the new 42-month contract, but AMS submitted the highest-rated proposal, according to Roger Israel, director of finance and operations for the BDHSSA.

“The contract had run its course,” he said. “We had done a couple of extensions on it, but we’re forced to go out every so often to make sure we’re getting good value for our money. It’s part of a standard process.”

The request for proposals (RFP) score considered several factors, including past relevant experience, pricing and whether the company is based in the NWT.

“Given the breadth of the service they are going to provide, of course that would give (AMS) a higher rating in the methodology section of the proposal,” Israel explained. “If you take away that kind of information, (though) the rest of the proposal remained at the same calibre; a very well-written proposal, very detailed on service levels and providing a higher level of service than we had requested, so of course that translates to a higher rating for them.”

Education and professional development are central to the AMS business model. Five of the company’s approximately 80 employees are educators, tasked with upgrading the skills of the medical staff.

There is about $500,000 worth of high-fidelity robotic mannequins that can “do anything your body does” in the AMS training lab, according to Ivens.

“There are only a handful of qualified people and most times they aren’t in the communities that we need,” he said. “We created this model so there’s a stepping stone for people. To just jump right into the primary care paramedic (PCP) level, you’re talking almost a year’s worth of education and very little (field) experience. We (wanted) to create capacity in the region.”

Ivens intends to expand that program and offer training to community members and nurses who work at the various health centres across the NWT they serve with the air service.

“We want to help (nurses) get some certifications they don’t have access to in the community,” Ivens said. “It also helps integrate them into what we do a little bit and that way when we do arrive for a medevac call, they know who’s coming and what to expect.”