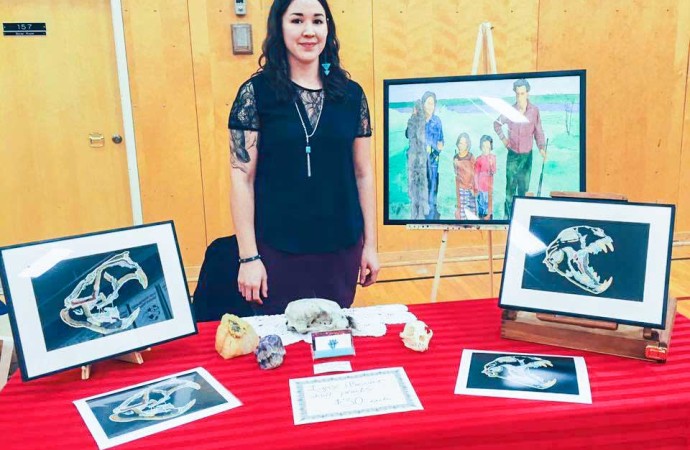 Fort Smith multimedia artist Melanie Jewell is constantly busy mapping out new ideas for projects, moving ever forward with her work as she experiments with everything from photography to prints, to graffiti and sketching.

In between her artistic endeavours, she is busy supplementing her income with annual stints as a wildfire fighter and other part-time work around the community. She also just established her own online Etsy shop, https://www.etsy.com/ca/shop/NorthwestJewell.

With such a busy schedule, it came as a relief to her to hear the NWT Arts Council is in the process of shifting its funding programming to a model that is easier to access for artists, both in Yellowknife and in the communities.

“One of the big changes coming for 2016 is we will be moving to a grant model,” said Boris Atamanenko, manager of community programs with the Arts Council, who is also a print maker and graphic designer. “The grant is not accountable funding, whereas before, we worked with contribution agreements which is a little bit more paperwork for people to have to manage and then report on their projects. I think we’re excited to see that we’re moving towards the grant model because it will be a little bit easier to administer from our end of course, but also for the artists to get right to what we’re doing and know that the government has faith in their artistic creations.”

As an artist in the North, Jewell said it is great to have these supports. In the past, she explained, she stressed about putting together funding applications. Between predicting costs – including shipping of expensive art supplies to her community – saving receipts and filling out piles of paperwork over an extended period of time, the task was cumbersome and didn’t always lead to a payout.

“It’s so helpful to have these grants now,” she said. “It makes the whole process so much easier.”

Late last month, Atamanenko teamed up with local Industry, Tourism and Investment officers and the Northern Life Museum and Cultural Centre to share funding opportunities with artists in Fort Smith. In addition to discussing Support for Entrepreneurs and Economic Development (SEED) money available through ITI and the benefits of joining the NWT branding and marketing program, media makers learned they can receive up to $15,000 in annual grant money from the Arts Council.

“(It) is also moving to an online process which will be up shortly,” Atamanenko said. “Right now, people can download a single application form and guideline. It used to be we had a guideline for each of the artistic disciplines but it’s now kind of a one-stop form for people to use and shortly, they will be able to actually enter their information on an application right online.”

The new one-stop shop model was outlined in the Arts Council’s five-year strategic plan launched in 2014, in coordination with the organization’s 30th anniversary. The move will harmonize a majority of government support grants available to artists in one place, with the exception of the Northern performers program, which will remain separate.

“Hopefully, this will make it easier for people to access the funding stream and will allow for more effective administration of the arts funding.”

For artists looking to apply on grants for audio recording, performing arts, writing and publishing, visual arts and crafts, film and media arts and mentorship programs, the deadline for grant applications is Feb. 28.