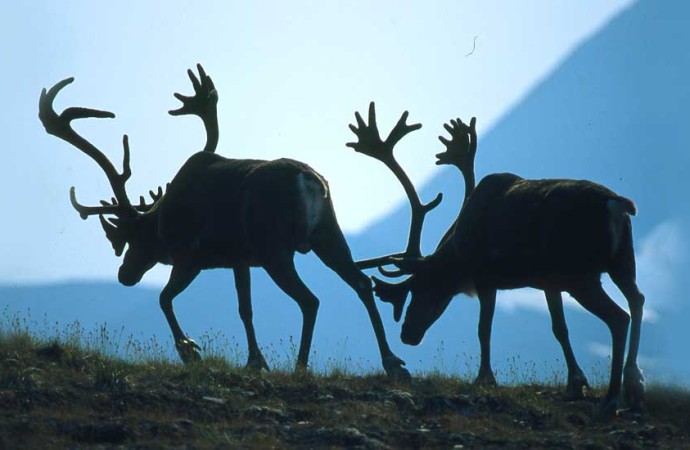 The once massive Beverly Caribou herd that roamed the Canadian Barrenlands for hundreds, perhaps thousands of years, has vanished from the planet.Photo: Norman Barichello.

The once massive Beverly Caribou herd that roamed the Canadian Barrenlands for hundreds, perhaps thousands of years, has vanished from the planet, and evidence recently published in the scientific journal, Arctic, by GNWT wildlife biologist Jan Adamczewski and his colleagues details the events that led to the herd’s demise in a period of less than 20 years.

The herd was at peak numbers up to and during the early 1980s, with a healthy population of at least 276,000 animals in 1994. In a Journal interview Adamczewski said the herd appears to have “crashed” in a very short period, roughly 16 years, starting in the late 1990s, and by 2009 was but a remnant.

The research paper states that most likely, “there was a true numerical decline in Beverly Herd size as death rates consistently exceeded birth and recruitment rates.” Today, “the Beverly herd is no longer identifiable as a distinct herd.”

Determining what actually happened to the last remaining animals in the Beverly Herd is the underlying purpose of Adamczewski’s paper. It outlines in detail how it is most likely those few remaining Beverly caribou joined the neighbouring Ahiak herd 250 kilometres to the north along the Arctic Coast, likely between 2006 and 2010.

His explanation is a refutation of a previously held theory that the Beverly herd, still with numbers above 100,000 animals, had simply relocated north and is now happily ensconced as a subset of the Ahiak herd along the high Arctic Coast in the Queen Maud Gulf. Adamczewski’s paper details how the previous theory was flawed. It also says, reporting that a catastrophic decline in the Beverly Herd’s numbers did not take place could be harmful to caribou management generally. 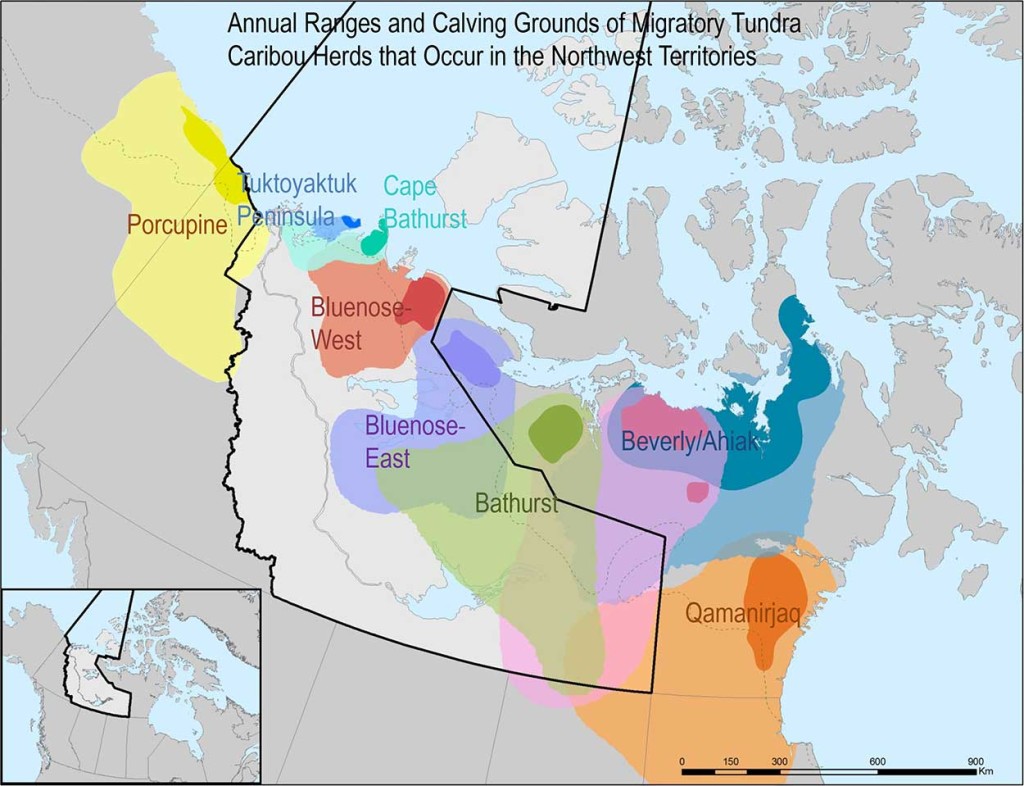 A recently published research paper shows the previously held theory that the Beverly Caribou Herd while still large and healthy moved north to join the Ahiak Herd, was actually incorrect. A broader look at evidence shows what really happened is the Beverly Herd was decimated after years with virtually no calving, until finally the few remaining animals joined the Ahiak Herd in order to survive. All the major Canadian migratory caribou herds have similarly suffered dramatic declines in the last two decades and they too are at risk. The exception is the Porcupine Herd that ranges between Yukon and Alaska, which appears to be healthy. There is no known cause, no “smoking gun” to explain the catastrophic drops in caribou herd numbers.

“A false conclusion, i.e. concluding a substantial numerical decline in caribou abundance did not occur when in reality it did, is the more serious error because it may result in long-term harm to the resource,” states Adamczewski in the paper.

Throughout his paper Adamczewski emphasizes that a comprehensive understanding of the pressures on Northern caribou and the demise of the Beverly Herd in particular are challenged by gaps in data over time. Studies were spotty, with some periods as long as a decade where no comprehensive data was gathered on the herd’s status or population. His conclusions on herd impacts and behaviour had to be drawn from diverse survey data and gathered evidence, along with traditional knowledge, hunter data and observations by others who frequent the caribou ranges.

The previously held theory that the healthy herd had moved en masse north to join the Ahiak herd was based mainly on information collected by tracking radio-collared caribou. Adamczewski included the tracking data from the collared caribou, but also drew information from numerous other sources. Wilderness outfitter and wildlife biologist Alex Hall, who traveled the Beverly caribou summer range annually from 1971 to 2015, was one of the paper’s co-authors.

Hall’s journal entries of his observations of caribou sightings over time had detailed evidence of the dramatic decline. From 1984 to 1996, Hall described seeing caribou an average of 19 days per summer. In the years following, sightings declined to an average of two days per summer and then in recent years, there were virtually no caribou sightings at all – from thousands per day in the 1980s and 90s to one or two a day by 2007. In 2001 he observed a group of 20,000 to 30,000 animals that were mostly cows and saw only one calf per 30 to 50 cows. In the summer of 2003, he observed “in a herd of 5,000 or more, about 90 per cent of them cows, virtually no calves.”

Hall’s information coincided with other biologists’ observations of exceptionally low numbers of calves on the Beverly calving ground in 2007, 2008 and 2009. That, along with other integrated data, led to Adamczewski’s findings. After the Beverly herd’s period of rapid decline, the small number of animals remaining in the calving grounds were in the company of still-healthy numbers of wolves and bears, a relatively large number of very hungry predators. That was likely motivation for the remaining Beverly caribou to relocate and join another herd where they could find safety in numbers. The remaining small number of cow caribou probably joined the much more abundant Ahiak herd which offered the benefit of “gregarious calving” whereby all the pregnant cows travel together to a remote part of the range away from predators. That strategy, along with safety in numbers, is the main reason why barren-ground caribou herds can reach such massive sizes.

Hall told the Journal that an additional reason the last Beverly caribou may have been driven from their calving grounds was helicopter activity associated with uranium exploration that was permitted there during those last few critical years.

The disappearance of the Beverly Herd is bad news indeed, but the really bad news is that nearly all major Canadian migratory barren-ground caribou herds have suffered similar dramatic declines. For example, the Bathurst Herd with its range north of Yellowknife, was estimated at 470,000 animals in 1986 and today is below 20,000. It is believed further decline may well continue, even without any hunting. Similarly the George River herd in northern Quebec, once the largest herd in the world at around 800,000 animals, is now down to a meagre 10,200 caribou and continues to show a declining trend (2015 census).

So far the Beverly Herd is the only one that has completely disappeared, but in addition to what impacted the herds initially causing their mysterious and dramatic drop in numbers, all the herds occurring in the NWT are now in an extremely vulnerable state and continue to face growing pressures from multiple threats. The impacts from humans appear to be the worst, but the caribou have many others challenges. Industrialization and development disturb the animals and the roads they bring allow increased hunter access. Predators, parasites, disease and forest fires all impact the animals and some of those are magnified by the warming of the North brought on by climate change, which is introducing its own new set of challenges for caribou.

The catastrophic reduction in several of the herds happened at roughly the same time (around 2000-2010), which may indicate a common cause. Adamczewski said the decline in all the herds is the result of high cow mortality and low calf productivity, with the two combining to produce low numbers. He said there is no known “smoking gun” pointing to cause, however he says there seems to be a correlation between herd declines and high drought indices in their respective ranges across the Canadian North. Drier weather over a number of decades has caused vegetation to change in their ranges, including impacts on the plants they feed on. The drought index was exceptionally high in 2014, the year of NWT’s mega-fires, which he suggests may be linked to poor summer feeding, a low pregnancy rate the following winter, and low calf production the next spring in a number of the herds.

One herd that is not in decline, and in fact seems to be growing in size, is the Porcupine Herd in Alaska and Yukon. Its calving grounds are usually along the Alaskan north slope and it migrates south into Yukon to forage in fall and winter. The herd had declined during the 1990s but then recovered and now has a healthy population. That region has not faced the same sustained high drought levels found in the ranges of the herds that are suffering further east. 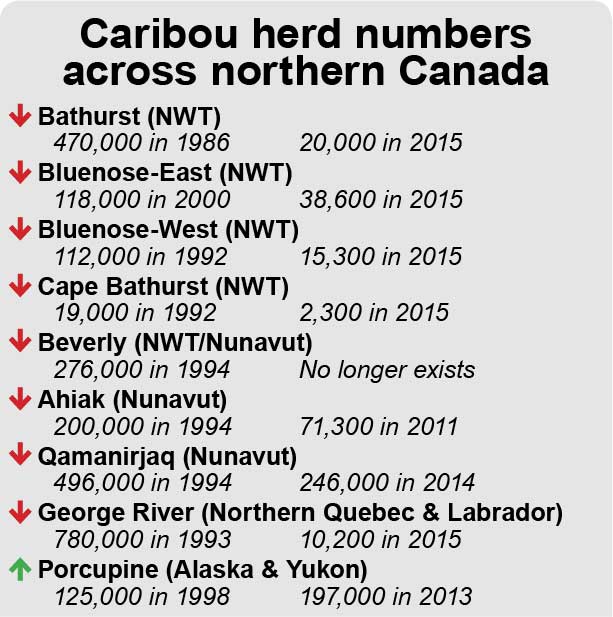 Adamczewski said the reduction in the size of herds also means a contraction in the size of the range they use. Their diminished range reduces the extent of some of the negative impacts on them, particularly if they winter in areas remote from settlements and infrastructure. He said that natural response may be a key factor in their survival and eventual renewal.

One of the paper’s conclusions is that the disappearance of a large caribou population such as the Beverly Herd may be “an exceptional event” and “is considered a troubling signal for conservation.” Although herds in the past have been known to recover from very low numbers, Adamczewski told the Journal it is worrisome that the same fate suffered by the once mighty Beverly Herd, which has now been wiped out, may be in store for some of the other large herds in the NWT and Nunavut.

His report’s one tiny note of optimism recognizes the possibility that, should conditions improve in the future allowing the Beverly Herd to reconstitute itself, the area of the calving ground in the vicinity of Beverly Lake in western Nunavut should be protected from development so it is waiting and available for the herd’s return.