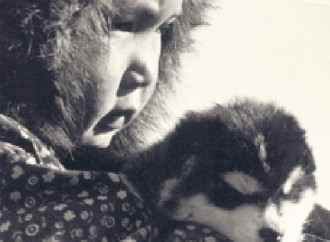 CBC and the National Film board of Canada are frequent visitors to northern communities.

A “mountain” of round rock sits off the southeast corner of our school. While the sun sneaks in to our town around the second week of January, we don’t get to see it for a week or so because the hill hides it. I am only twelve years old, but I can feel the effects of no sunlight this year.

There is a sound crew in our gym, we can hear “check, check… one, two, three,” “one, two, one, two… check, check.”  A microphone screams out… it is tired of the check, check stuff. This is our first day of the new time schedule. There appears to be confusion amongst the adult ranks, they need to have a meeting. We are allowed to go and watch the film crew in the gym. Explicit instructions are given that we are to be seen and not heard. And not seen if possible!

They are playing music over a loud speaker in the gym but can’t seem to get it right.  There are two windows in the gym; these are covered with a heavy wire mesh so that we don’t break them when we get rough playing dodgeball.  Looking out past the mesh is the rounded rock hill that has been blocking the sun for a very long time.

Music starts and dies, starts again. What we hear of these notes doesn’t resemble the tinny portable record players that are abundant in our community. The sounds that they play are full and round and fill your head with the music. Lots of us have records that we swap and lend each other. Our music is dated, there wo Infrastructure issues – a federal funding wish list n’t be anything new come in the way of new records until the kids return from the hostels with the latest tunes. We are so far behind.

Ms. Snow gave me her record player and records. Her hair is wild and very red. She talks in riddles, she calls my brother “the sorcerer’s apprentice.” Her itigi is not usual, it is made with psychedelic colours. She had to special order the material. Her choice of parka cover is not even close to traditional. It is nice to see something different.

Ms. Snow is the first Ms. that I have ever met. Her accent is strange; people say that she comes from a royal family in England and that she did not like such a restrictive life. People say that she has run away to live with real people in the North.

My new record collection is extensive; I have not heard most of the songs on the records or know of the artists either. I now have the Young Bloods and Grassroots, some group called the Lovin’ Spoonful. Ms. Snow’s music is quite different from the Archies singing “Sugar, Sugar”. Philip gave me that record.