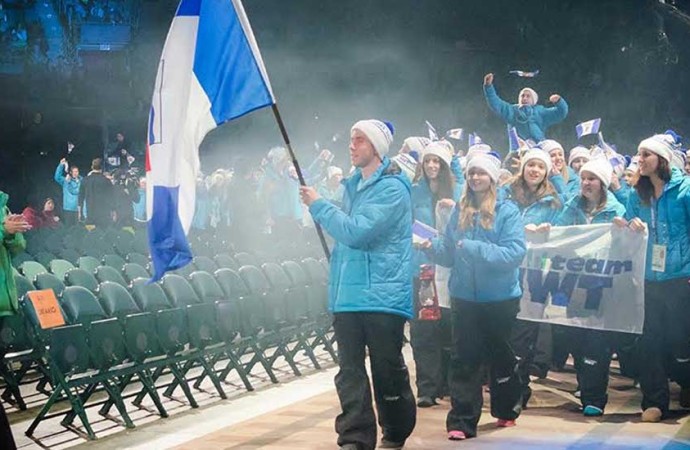 Yellowknife city councillors have no taste for hosting the Canada Winter Games in 2023.File photo.

Yellowknife’s play for the 2023 Canada Winter Games likely met its end at a Feb. 16 council meeting, where councillors unanimously announced their intent to vote against the bid.

The final vote took place in a council meeting held the evening of Feb. 22, after the Journal’s publication deadline, but councillors strongly indicated they were not in favour of the multisport event.

A lack of ready infrastructure, economic instability in the territory and uncertainty over the territorial government’s involvement in the Games were key factors cited in each of the councillor’s decisions.

“I do not support the games for many reasons, of which many of my colleagues brought up, including budget concerns, lack of community support, as well – for me – the plan to not remotely host any alpine events,” said Councillor Niels Konge.

“The bid is shaky, with the lack of an alpine hill decreasing the attractiveness of the project,” added councillor Rommel Silverio. “We are also not on firm financial footing. The lack of a firm commitment from the GNWT to kick in $26 million in Athletes’ Village funding is an extremely troubling financial item. The economy right now is not in a good shape where mines are closing and shutting down. We also needed to look not just (at) preparing for the CWG but also after the games what are the implication to the City’s budget for all the infrastructure that was build for the games.”

The Games were also discussed in Friday’s Legislative Assembly session, where Municipal and Community Affairs (MACA) Minister Robert McLeod took questions from MLA and former Yellowknife city councillor Cory Vanthuyne, who has been an ardent supporter of the games.

“It is understood that a Games bid by the City of Yellowknife would require the GNWT to support its share of the operational infrastructure requirements, as per the standard Canada Games tri-party agreement,” McLeod said. “If the City makes a bid, GNWT will mobilize our departments to come up with potential financing models to meet the GNWT funding obligations.”

He noted that the seven-year timeline leading up to the games would allow for some “flexibility to come up with the necessary funding to support our part of the Canada Winter Games.”

“If the city decides to proceed with the bid  … the NWT Housing Corporation is prepared to enter and negotiate a 70/30 (cost) split on the construction of an athletes’ village that will meet the needs of the Canada Winter Games and the NWT Housing Corporation for public housing. Given the expected increase in the number of seniors, this would also be a project that would benefit the seniors in the NWT as well.”

Councillor Julian Morse said he and a majority of the constituents he had consulted would rather see the funds funneled into community infrastructure projects including a new pool, downtown revitalization and addressing issues with homelessness, sooner rather than later.

“If you’re going to invest $50 million about the Canada Winter Games, that’s money that you can’t spend somewhere else,” Morse said.

He noted that the territorial government’s lack of hard financial commitment to the games was indicative of a chronic struggle to split funding between Yellowknife and NWT communities.

“I think’s it’s obvious to say that the Canada Winter Games would benefit more than just Yellowknife if they came up, but the territorial government is far less likely to help the city with the funding for these sorts of things precisely because of the political situation here, that the communities often fight funding for Yellowknife,” he said, noting that the Yukon territorial government had provided a majority of money for the 2007 Whitehorse CWGs.

“There’s this attitude that Yellowknife gets too much and for a thing as big as the Canada Winter Games, there’s no way we could have done it without the territorial government.”

Vanthuyne said the Whitehorse games came with a $120-million price tag, but the positive economic impact was “massive.” He said visitors spent nearly $9 million during those two weeks according to an independent economic impact study, and many of them indicated they were likely to return in the near future.

Those figures just weren’t good enough to convince councillors to vote in favour of the bid.

The next opportunity for Yellowknife to host the multisport event won’t be until 2049. Councillors said they are hopeful that Yellowknife, and the territory as a whole, will be in a better position to host the national-level games in the future.

“I do hope that in the future there is a push for a Canada games, but (we) would have a much easier time supporting a summer games bid, as I believe that we either have, or could build all the facilities that are required to host all the sports in a summer games,” said Konge.