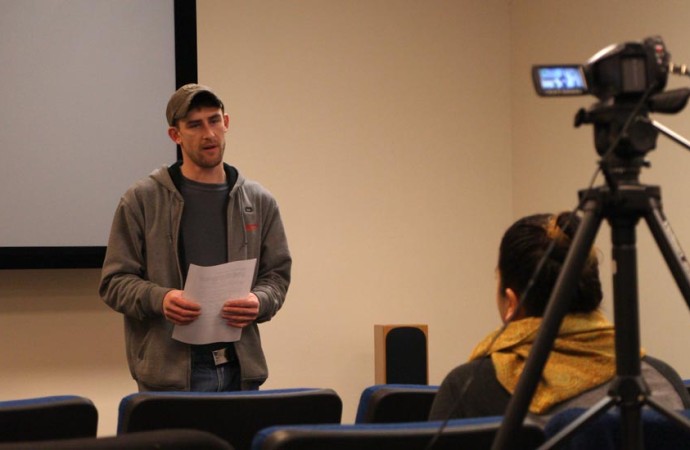 Calum McCarney auditioned for Three Feathers back in January. He will play the role of Maureen’s Husband.File photo.

The film adaptation of the graphic novel Three Feathers – a tale of restorative justice for three teenaged boys based on a true story – will start filming at the end of March and finally, the cast list has been announced.

“It’s a really new and exciting project for all of us,” said Brent Kaulback, a producer on the project. “We’ve got our production crew who are again, Fort Smith or Northwest Territories people, so it really is becoming a Fort Smith production in that sense. At the same time it’s a very professional crew and we hope to make it a really nice, polished and hopefully well-received production.”

The majority of the players hail from Fort Smith and are eager to capture their town for the big screen.

“For me, this is more of a fun thing,” said Pat Burke, who will take on the role of Gabe, a man who faces off against the three boys in a conflict at the start of the story.

For the first time, Burke will be working alongside his son David, a professional actor known for his role in the Hollywood film Cut Bank.

“I like to be involved in things and I knew he was playing a part because I know that Richard wanted him to be in one of his movies,” he said. “I thought well, what the hell? I guess he plays one of the young guys that I have to fight.”

Outside of his new film career, Burke is the associate warden at the Fort Smith Correctional Centre. Much of the programming delivered at the centre is rooted in the concept of restorative justice, an approach that is less punitive in nature and more integrated with the needs of the victims, offenders and the community. He was happy to see attention being paid to what he believes is an important element of justice.

“Even though we’re a facility that has lockdown for situations, I still believe in rehabilitation and the reintegration of people and that’s pretty much our mandate in the department of corrections,” Burke said. “In the movie, it’s a bush camp type thing where these young people go to learn part of their culture and respect is the biggest thing.”

Another standout element of the film is the decision to shoot it in four languages: English, Slavey, Cree and Chipewyan.

“I think it’s going to be interesting because for every scene that we make, right when we’re done we’re going to be doing it in Cree and then we’re doing it over again in Chipewyan and then again in Slavey,” said Eileen Beaver, who will be playing the role of Irene.

Irene and her husband Raymond – to be played by Eileen’s real-life husband Henry Beaver – are the elders tasked with leading the boys’ rehabilitation through on-the-land learning.

Eileen knows the story inside-out – she was integral in the process of translating the graphic novel into Chipewyan.

“We’re also showing that (indigenous languages) are not only taught in a classroom or in the home, but we can use technology like going right to the movies and I think it’ll be great,” she said.

“The elders and the people who don’t speak English can relate to it and connect to it and the students who are taking the languages in their communities can also possibly use that as part of their teaching tools.”

Beaver said she is often asked by students where they will ever use a second language, which in high school is Chipewyan.

“(They say) ‘my parents are Chipewyan but they don’t speak it at home; or my parents are Dogrib but I’m just taking this because it’s a Dene language; or my parents are Slavey and can I use it in university?’” she said. “When they find that they can take second languages and get their master’s and doctorate’s degree – especially in Chip and Cree – they look at it differently too. It’s one way of promoting and revitalizing our languages.”

At eight years old, Frankie Laviolette is one of the younger cast members. An alumnus of Three Feathers director Carla Ulrich’s summertime Youthrise film camp, Laviolette said he couldn’t wait to get started filming, to put his skills to the test.

Filming is set to begin in late March, followed by sessions in mid June and late September, so the producers can capture all four seasons.