Dragons warm the North with the power of Aurora Heat 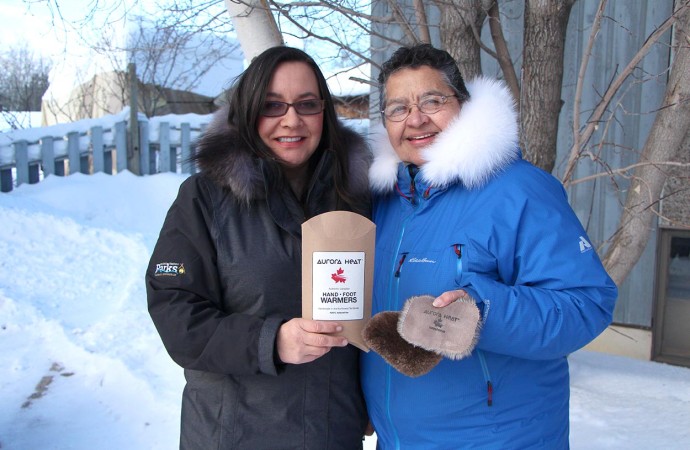 It’s hardly a surprise that entrepreneur Brenda Dragon is turning to her roots to start up a new business in the fur industry.

A trapper’s daughter raised in Fort Smith by mother Jane and late father David, she remembers being encouraged to stuff fur into her winter gear, an added layer of warmth to protect her from the harsh elements of the subarctic winter.

This month Dragon is sharing the tradition with numbed extremities across Canada as she launches a new line of hand and foot warmers made from small swaths of sheared beaver, to be distributed under the brand Aurora Heat.

“Growing up in the North with my parents trapping, we were always being dressed in furs for warmth,” she said. “It’s been four years now since my father’s passing and I wanted to honour his kind of livelihood I suppose you could say, his traditional lifestyle.”

Dragon first acknowledged the business potential for the warmers in Yellowknife when she – like her mother before her – would adorn her children with fur.

“My son is a snowboarder and I spent the last several years dressing him to keep him warm,” she said. “He was snowboarding at 40 below so we will use a lot of fur. Then, I realized how effective it was when all of his friends kept asking for it as well, so I was always making things for them.”

Dragon left a sample set of warmers at the Journal office to test out. The pieces are soft as cashmere and small enough to fit perfectly in your gloves or boots.

“Just hold it in your hands and just feel how the heat radiates,” she said. “The way it works is the beaver fur insulates your own heat so it traps and keeps it. It’s quite remarkable. It’s a reusable, all-natural product.”

The new venture is a labour of love for Dragon, one she wants to use to help maintain traditional economies in the NWT.

“We’re positioning it as a Northern Aboriginal product and our products will be fur used for warmth – ‘Fur Warmth’ is the official slogan,” she said. “I’m using primarily Genuine Mackenzie Valley fur … and I’m working with my mother who is the cultural advisor for Aurora Heat.”

The Genuine Mackenzie Valley Fur Program is a marketing initiative run by the GNWT to provide access to international markets for NWT trappers. Figures from 2015 show that as much as $100,000 was generated in sales for the NWT’s traditional arts and crafts sector in December alone, thanks to the availability of fur and moose hide from the program.

From the Chipewyan language written on the side of the packaging to the fur-handlers she wants to hire to operate the business, Dragon is hopeful that the Aurora Heat warmers benefit people in her hometown.

“I’m going to be looking for people in Fort Smith who are interested in preparing them because it’s a handmade product,” she said. “I’d like this business to be based in Fort Smith.”

Sales for Aurora Heat products start this month at www.auroraheat.ca and in select stores in Fort Smith and Yellowknife.