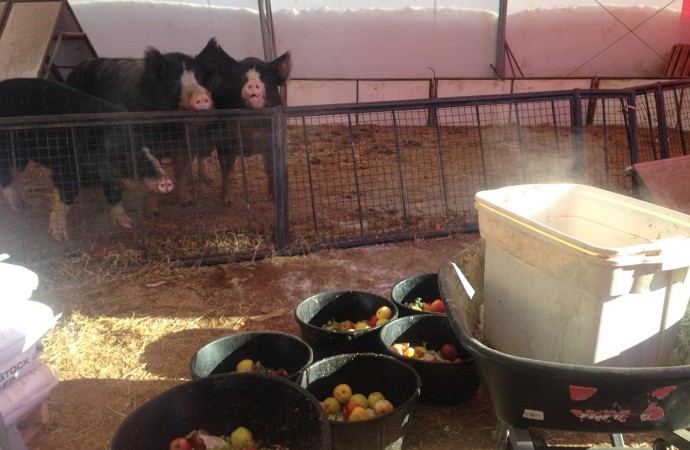 Pigs at the Northern Farm Training Institute can already smell the fresh apples and other produce they are about to feast on thanks to an agreement with a local grocery store that sees the teaching farm save tens of thousands of pounds of distressed food from entering the Hay River landfill.Courtesy of Kim Rapati/NFTI

I’m sticky all over. My hands, hair and sleeves are all danger zones. The culprit: more than 100 little bags of different types of salad dressing.

We have been collecting the little packets that come in salad kits for a few months and I finally had time to cut and pour them out into a larger bucket, but man, it’s a messy job!

One of the Northern Farm Training Institute’s (NFTI) goals is learning how communities can use local resources to support small farms, and an important part of this is recognizing useful waste streams. Since September we have been picking up distressed food from the Super A grocery store – approximately 150 pounds per day, over 27,000 lbs in total. “Distressed food” is a grocery store term for food that they throw out at the end of each day (bruised fruit, salad that’s gone a touch slimy, bread with a dot of mould), still edible but no one would buy it.

I stood up and talked about this project at the Canadian Food and Drink Summit in Toronto this October during a session called Enacting a Better Solution to Eliminate Food Waste in Canada. It was met with lukewarm “mmm-hmms” and people noted that farmers in their area would not have the time to do what we are doing, and it wouldn’t be worth the effort. That is what we wanted to look into; how much time does it take once we set up an efficient system, and how much is it offsetting our animal feed costs? We will only know if we try.

Well, we have been trying for six months and, first of all, I love doing it. Sorting food is a nice break from office work and a real joy when I think about how much we are saving from Hay River’s landfill. And is it worth it? Well, one of the buckets I filled with those packets of dressing weighed 10 pounds. That is approximately 22,000 calories and we have at least 100 lbs in total saved up. A 600 lb pig needs approximately 9,000 calories per day at the height of winter, so the salad dressing alone has enough calories for one pig for 24 days!

The dressing is just a tiny bit of what we collect and it has been such an adventure for us to learn about what foods our animals really enjoy. Mushrooms, potatoes, broccoli and onions have to be cooked in a stew in order for the pigs to eat them, but once we mix in a bit of salad dressing, oh, that stew is their favourite. Fresh herbs, veggies and oranges are beloved by the goats and sheep. The pigs are ecstatic when they get any fruit, bread or dairy products.

One of our other exciting partnerships is with the new brewery in Yellowknife; NWT Brewing Company. We nabbed a bit of the spent grains (which is a mix of hops and barley left over from their brewing process) when we were there at the end of January. Now, I can’t walk casually into the sheep’s pen with a bucket – I have to put it up on top of my shoulders or I will be covered in warm woolly bodies in an instant! They absolutely love the grain, which is full of protein and nutrients. There’s a method of quickly sneaking in and strategically tossing the grain in many different feeder spots all over, so you don’t get trampled by their enthusiasm. The animals love the feed, the brew pub doesn’t have to pay to dispose of the material, and now we have a great connection that may lead to more opportunities (like growing specialty hops for them).

We need to transform our agricultural system. We need to learn how to support each other’s endeavours to strengthen our communities. When we embrace these symbiotic partnerships, we truly will be able to feed ourselves and support thriving communities. We want to deeply thank the Super A Grocery Store, NWT Brewing Company and all the other individuals and businesses who have supported us so far. Together, we can harvest all we need!