In conversation with the justice minister 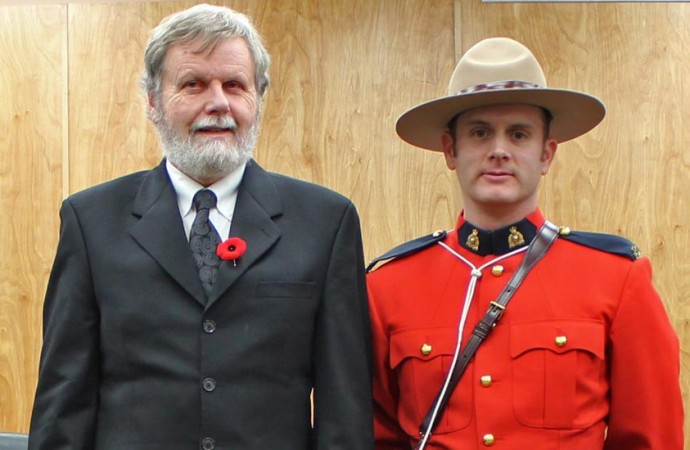 Louis Sebert with Constable Jeff Hemeon after being sworn-in to Fort Smith town council in November 2012. Now NWT justice minister, Sebert discussed incarceration rates, access to justice for Northerners and what legal marijuana in Canada could mean to the NWT with the Journal.File photo

The government of the Northwest Territories gained a significant body of legal experience when former Fort Smith town councillor Louis Sebert was elected MLA for Thebacha in November, one which Premier Bob McLeod wasted no time tapping into by naming the rookie Minister of Justice.

In a phone conversation with the Journal, Sebert opened up about challenges facing the NWT justice system and how it could be improved, the disproportionate number of Aboriginal men incarcerated here and his longstanding personal support of marijuana legalization.

Northern Journal: You spent years as a defence lawyer and are well aware of the disproportionate number of Aboriginal men in prison here. What insight do you have on what needs to change to address that?

Minister Louis Sebert: The department has recognized the overrepresentation of Aboriginal inmates as an issue. We’re working with other jurisdictions also facing the same issue. Apart from the programming that actually takes place in jails, we’re trying to look at the root causes of crime. We believe those have to be addressed before we see a real change.

For example, we’ve been working in conjunction with Education, Culture and Employment and Health and Social Services on the anti-poverty strategy, early childhood development and mental health and addictions strategies. We’re hoping all of these will lead to a crime reduction over the long term.

We also have specialized courts that we’re attempting to have deal with persons who do find themselves in front of the courts. They include specialized courts like wellness court, which deal with people with addictions. It was established in 2014 to provide an alternative court seeking to address underlying issues of drug and alcohol addiction, mental illness and cognitive challenges presented by offenders. I believe this is based on models that have shown some success in other jurisdictions, principally British Columbia.

We also have the Domestic Violence Treatment Options (DVTO) court, which is in Yellowknife and Hay River. Depending on resources, because not only must the court be there, but you have to have other resources like counsellors and so on, it might be expanded. Smith is a possibility. People in Smith now who want to avail themselves of the program are often travelling to Hay River.

So those are things we’re trying to do. Both deal with the root causes that lead to crime and also should offenders appear in court, we want to look at alternatives to traditional incarceration.

NJ: Improving access to justice, in particular when it comes to family court, was listed among the 18th Assembly’s draft mandate. Could you elaborate on how you plan to do so?

LS: We do have probably the most generous legal aid system in the country. We have both clinic lawyers, I think there’s about 15 of them, and also lawyers in private practice that are hired by Legal Aid to deal with files. We are hoping to increase outreach. One of the lawyers in the clinic has been going out to virtually all of the communities and dealing with people that kind of fall between the legal aid system and being able to hire a lawyer, let’s say in a dispute with your landlord or something like that. We’re hoping to fill that gap by increasing the mandate, if I can put it that way, of Legal Aid.

NJ: The Trudeau government seems pretty committed to fulfilling its election promises, including to legalize marijuana. Has the federal government sought any input from yourself or the GNWT on the prospect of that yet?

LS: It’s interesting, I went to a federal-territorial justice ministers meeting in Quebec City (at the end of January) and it didn’t come up. Physician-assisted dying was prominent in the discussions. The Quebec government’s people spoke extensively to that.

We’re not sure how this is going to roll out. No, they have not sought out my personal opinion on this (laughs). I’m expecting some sort of change in the federal legislation – and I’m just speaking for myself, this is not a position of cabinet or of this government – but I expect it will be somewhat like when we went from prohibition of alcohol to allowing it to be sold. That would seem to be at least partly a provincial and territorial function. It’s going to be interesting to see how this rolls out. I don’t think we’ve examined extensively what our reaction is going to be to the change in the criminal law, if I can put it that way. I’m not certain how high a priority that is for the federal government. I think somehow we’re going to figure out how if it is legalized how it will be sold, if it will be like cigarettes and alcohol, probably, but again the government hasn’t taken a firm position on that and we haven’t examined it extensively.

NJ: What areas of growing and selling would be under the jurisdiction of provinces/territories?

LS: We haven’t had that discussion. I know the production and sale of alcohol is certainly surrounded by a great amount of provincial and territorial legislation so I’m not certain how that would roll out.

NJ: I understand you’ve written in support of legalization. Is that an accurate statement?

LS: My personal position, not the position of this cabinet or the government, is that I have been, for some time, in favour of legalization. I accept there can be some bad effects, but we accept those with alcohol use also, so I see it somewhat in the same category as alcohol. Probably there would be some upsurge in use when it becomes legalized, but I don’t think it would be a tremendous upsurge. I think after prohibition they found there was some increase in alcohol consumption, and with alcohol we accept that a certain percentage of the population is going to have difficulties with it and that may be true (also but) hopefully a little less so with marijuana.

NJ: Washington and Colorado are making a killing in tax revenues now that it’s legal there.

LS: That’s one of the reasons I was in favour. I think, isn’t it better to have it regulated and taxed than to have it part of an underground economy to some degree controlled by criminals?

NJ: As a longtime defence lawyer, you understand that would alleviate pressure on the justice system as well, wouldn’t it?

LS: Certainly legalization would, and I haven’t been going to court for the last year or two, but there was not a tremendous number of people in the courts lately with marijuana charges. Sometimes they were arrested for something else and marijuana was found in their pocket. There still are a large number of Canadians, I know, would have a record for convictions, and I’m not sure how the federal government would deal with those. I just don’t think that happens very much anymore.